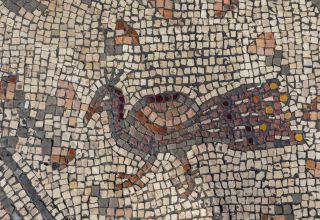 A colorful fifth-century mosaic that depicts one of Jesus‘ most famous miracles has been unearthed in Israel, perfectly preserved beneath the ashes from an ancient fire.

The mosaic, which likely shows Jesus feeding the masses with loaves and fishes, once adorned the floors of a church built in the late fifth or early sixth century in an ancient city called Hippos. This city, built on a mountaintop overlooking the Sea of Galilee, was prominent during the Roman and Byzantine times, according to a statement.

Now referred to as the “Burnt Church,” this structure was likely burned to the ground during a Sasanian conquest of Hippos in the beginning of the seventh century. (The Sasanian empire was the last Persian empire before the emergence of Islam). Its mosaic floors, however, were well preserved in the ash.

The mosaic was very colorful and had two Greek inscriptions that describe the ancient church fathers, who built the church for a martyr named “Theodoros.” The mosaic was also covered in geometric patterns, birds, fish, fruit and baskets. Some of the baskets were filled with loaves of bread and fish, likely in reference to one of the “Feeding the Multitude” miracles described in the New Testament, according to the statement. The scripture describes Jesus multiplying five loaves of bread and two fish in order to feed 5,000 men.

Similarly, the mosaic has portions depicting five loaves of bread and two fish. The mosaic also shows the 12 baskets of bread and fish that the scripture says Jesus’ disciples were left with after feeding the hungry.

While there may be other explanations for the mosaic, “You cannot ignore the similarity to the description in the New Testament,” Michael Eisenberg, head of the excavation team in Hippos and archeologist with the Zinman Institute of Archeology at the University of Haifa, said in the statement.

The biblical account doesn’t say precisely where Jesus performed this miracle, other than it was in a remote location, according to the statement. Some scholars believe the Bible is describing the Church of the Multiplication on the northwest side of the Sea of Galilee, but the biblical description also fits with the region north of Hippos, not far from the new site, according to the statement.

“The church is located right at the western edge of Mount Sussita and is the most western point in the city and overlooks — today as it did then — the Sea of Galilee and Jesus ministry and where most of his miracles occurred,” Eisenberg said. “There is no doubt that the local community was well familiar with the two miracles of Feeding the Multitude and perhaps knew their estimated locations better than us.”

So perhaps it’s logical to assume that whoever commissioned or created the mosaic wanted to “create an affinity to a miracle which took place nearby,” he said.

However, he notes that there are also many differences between the biblical account and the mosaic. Some of the baskets are not only full of bread but also fruit. What’s more, in some places the mosaic has three fish — not two. Fish have many symbolic  meanings in the Christian world, so interpreting the mosaic requires caution, Eisenberg said.

The Zinman Institute of Archeology has spent the last two decades excavating Hippos, and has been excavating the Burnt Church for a decade. The new excavation has also unearthed burnt doors and bronze door knockers in the structure of roaring lions.