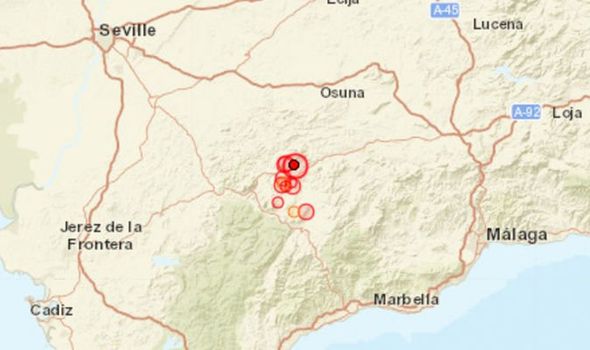 The 4.5 quake struck in Marbella at 9.45am, earthquake tracking site EMSC CSEM reported. Witnesses detailed their experiences on the website, with one simply saying: “Wow.” Another said: “Sat on the roof reading and could see terrace and building moving!”

One said: “Lived in California so well aware of what an earthquake feels like. Felt slight sway for a couple of seconds.”

The quake hit Marbella, in the south of Spain, near a number of major urban areas.

While not as common as on the Pacific Ring of Fire, the US Geological Society (USGS) said earthquakes regularly strike in the Mediterranean area due to the convergence of the African and Eurasian tectonic plates.

They said on their website: “Large earthquakes throughout the Mediterranean region have also been known to produce significant and damaging tsunamis.

“One of the more prominent historical earthquakes within the region is the Lisbon earthquake of November 1, 1755, whose magnitude has been estimated from non-instrumental data to be about 8.0.

“The earthquake is notable for both a large death toll of approximately 60,000 people and for generating a tsunami that swept up the Portuguese coast inundating coastal villages and Lisbon.”