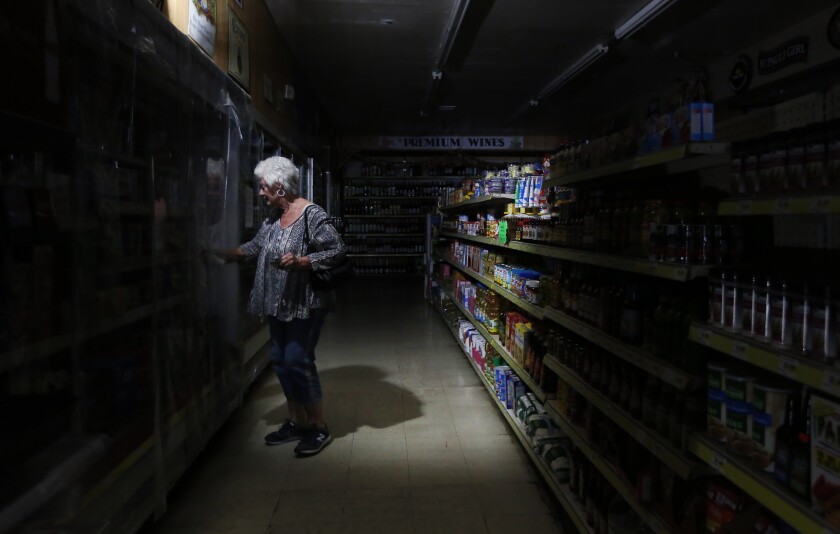 This weekend’s planned power outages could be the largest yet in California, as utilities such as Pacific Gas & Electric and Southern California Edison order wide blackouts to prevent more blazes — and more wildfire liability — amid strong, hot winds.

PG&E, which has 5.4 million electric customers and provides power to 16 million Californians, was projecting Thursday that it could shut off power across nearly all of its territory in Northern California on Sunday and Monday because of ferocious gusts.

“This system will likely be the strongest event of the year from a wind perspective,” the utility said on its website. “Federal forecast agencies are in alignment that this will be a high-risk weather event.”

Edison customers could face continued power shut-offs — or new ones — because of the weather forecast.

The utility said it will know more by Friday afternoon, but there was the possibility that about 380,000 customers across six counties in Southern California would have their electricity cut off Sunday afternoon.

The bulk of the customers who could be left in the dark were in Ventura, Los Angeles and San Bernardino counties, with Orange, Riverside and Kern counties also facing additional time without power.

About 21,000 Edison customers remained without electricity as of Friday morning, mainly in Los Angeles County, near Agua Dulce and the location of the Tick fire.

“Given the wildfire situation that we’ve already seen, the concern about catastrophic fires is real,” Edison spokesman Robert Villegas said. “We can’t sugarcoat the fact there is a possibility of something catastrophic happening. And if we need to do it for public safety, we are going to shut the power off.”

Although designed to protect the public, California’s intentional power outages have outraged millions of people, including those subjected to fire evacuations and power outages simultaneously, as in Sonoma County on Thursday.

“They shut off the power and we still had a fire,” Madonna Tavares, 70, of Geyserville said. “I don’t understand it.”

Where PG&E may shut off power

State leaders have blasted PG&E — which blacked out about 750,000 customers in Northern and Central California starting on Oct. 9 — for not being more selective with its power outages. The utility’s outages this week have been far smaller than the ones earlier this month, affecting only 179,000 customers. But this weekend could swing wildly in the other direction, illustrating the unpredictability of weather conditions and electrical power decisions, both of which are out of the control of frustrated state politicians.

At a news conference Thursday, Gov. Gavin Newsom again criticized PG&E and other utilities for not making prior investments to systems in the face of climate change and mounting wildfire threats. He said PG&E must be held accountable.

“This is unacceptable,” said Newsom, who faces political risks from the continuing power outages. “Issues of corporate greed meeting issues of climate change have created these conditions.”

Where Southern California Edison may turn off power

PG&E filed for bankruptcy in January, largely because of liabilities it faced from causing past fires. On Thursday, the utility told state regulators that one of its transmission lines had problems Wednesday night around the area where a massive Sonoma County fire broke out.

Earlier that day, PG&E had cut power to approximately 178,000 customers from the Sierra Foothills to the North Bay to San Mateo and Kern counties. By Thursday night, the company said it had restored nearly 165,000 customers in portions of 18 counties.

At a news conference, company officials said the potential area for this weekend’s outages could be as broad as the one that put millions in the dark in early October and could start as soon as Saturday evening. PG&E President and Chief Executive Bill Johnson added there was “elevated potential” the shut-off could last longer than the outage that started Oct. 8.

Johnson said that thousands of PG&E employees were working in “full force” to limit the disruption from outages but that some were being subjected to “threats” and “verbal assaults.” He pleaded for customers to treat the workers with civility, adding: “I understand there is anger at PG&E but let these people help you.”

The upcoming blackouts could affect eight of PG&E’s nine service areas — stretching from Humboldt County in the north, to the north end of San Francisco Bay, the San Francisco Peninsula, East Bay and Central Coast.