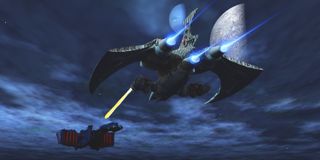 You’ve probably heard of Schrödinger’s cat, the unfortunate feline in a box that is simultaneously alive and dead until the box is opened to reveal its actual state. Well, now wrap your mind around Schrödinger’s time, a situation in which one event can simultaneously be the cause and effect of another event.

Such a scenario may be inevitable in any theory of quantum gravity, a still-murky area of physics that seeks to combine Albert Einstein’s theory of general relativity with the workings of quantum mechanics. In a new paper, scientists create a mashup of the two by imagining starships near an enormous planet whose mass slows time. They conclude that the starships could find themselves in a state where causation is reversed: One event could end up causing another event that happened before it.

“One can devise this kind of scenario where temporal order or cause and effect are in superposition of being reversed or not reversed,” said study co-author Igor Pikovski, a physicist at the Center for Quantum Science and Engineering at Stevens Institute of Technology in New Jersey. “This is something we expect should take place once we have a full theory of quantum gravity.”

The famous Schrödinger’s cat thought experiment asks a viewer to imagine a box holding a cat and a radioactive particle, which, once decayed, will kill the unfortunate feline. By the principle of quantum superposition, the cat’s survival or death is equally likely until measured — so until the box is opened, the cat is simultaneously alive and dead. In quantum mechanics, superposition means that a particle can exist in multiple states at the same time, just like Schrödinger’s cat.

The new thought experiment, published Aug. 21 in the journal Nature Communications, combines the principle of quantum superposition with Einstein’s theory of general relativity. General relativity says that the mass of a giant object can slow down time. This is well established as true and measurable, Pikovski said; an astronaut orbiting Earth will experience time just a smidge faster than his or her twin back on the planet. (This is also why falling into a black hole would be a very gradual experience.)

Thus, if a futuristic spacecraft were near a massive planet, its crew would experience time as a little bit slower than would people in a fellow spacecraft stationed farther away. Now, throw in a little quantum mechanics, and you can imagine a situation in which that planet is superpositioned simultaneously near to and far away from the two spacecraft.

In this superpositioned scenario of two ships experiencing time on different timelines, cause and effect could get wonky. For example, say the ships are asked to conduct a training mission in which they fire at each other and dodge each other’s fire, knowing full well the time the missiles will launch and intercept their positions. If there’s no massive planet nearby messing with time’s flow, this is a simple exercise. On the other hand, if that massive planet were present and the ship’s captain didn’t take the slowing of time into account, the crew might dodge too late and be destroyed.

With the planet in superposition, simultaneously near and far, it would be impossible to know whether the ships would dodge too late and destroy each other or whether they would move aside and survive. What’s more, cause and effect could be reversed, Pikovski said. Imagine two events, A and B, that are causally related.

“A and B can influence each other, but in one case A is before B, while in the other case B is before A” in a superposition state, Pikovski said. That means that both A and B are simultaneously the cause and effect of each other. Fortunately for the likely-confused crews of these imaginary spacecraft, Pikovski said, they would have a mathematical way to analyze each other’s transmissions to confirm that they were in a superpositioned state.

Obviously, in real life, planets don’t move around the galaxy willy-nilly. But the thought experiment could have practical implications for quantum computing, even without working out an entire theory of quantum gravity, Pikovski said. By using superpositions in computations, a quantum-computing system could simultaneously evaluate a process as a cause and as an effect.

“Quantum computers may be able to use this for more efficient computation,” he said.

Read More:Two New Gravitational Waves Discovered In One Day: What Is So Massive It Is Rippling Space-Time?