Yellowstone is a volcanically active region in the northwest US, as proven by its frequent geyser eruptions and earthquakes. In April this year, geologists observed a new sign of activity when a so-called “thermal area” appeared on infrared scanners near West Tern Lake. The thermal area described a part of the Yellowstone National Park where ground temperatures drastically spiked and burned away grass and trees. Yellowstone Volcano Observatory (YVO) geologists have now analysed the thermal area to uncover the extent of the damaged caused.

A team of scientists visited the scorched area last week for ground-based and air observations.

The geologists mapped the extent of the thermal area and measured temperatures near the ground.

The YVO is responsible for monitoring the Yellowstone volcano for signs of activity under the US Geological Survey (USGS). 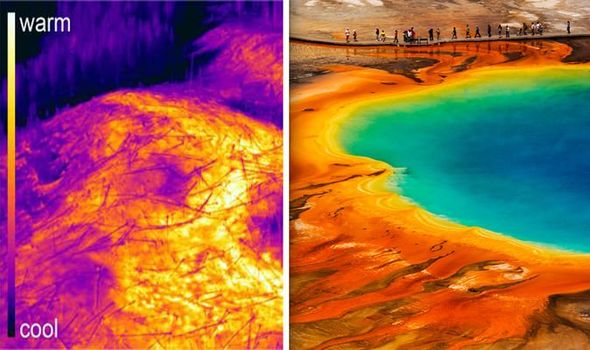 The Yellowstone scientists wrote: “The ground was so warm that parts of the fallen trees have actually become charcoal.

“The sides of the fallen trees against the warm ground are baked and blackened, while the sides facing the sky are unburned.

“In the cooler zone, some parts of the ground were at background temperatures.”

In parts of the thermal area, thermometers skyrocketed as high as 198F degrees (92C).

However, just “a few feet away” the temperatures would drop down to a bearable 77F (25C).

Aerial photographs of Yellowstone dating back to the 1990s show this part of the park was a lush, green landscape 30 years ago.

But by the summer of 2001, satellites picked up the first signs of trees withering away.

By 2006, a large area of dead trees was slowly expanding outwards. 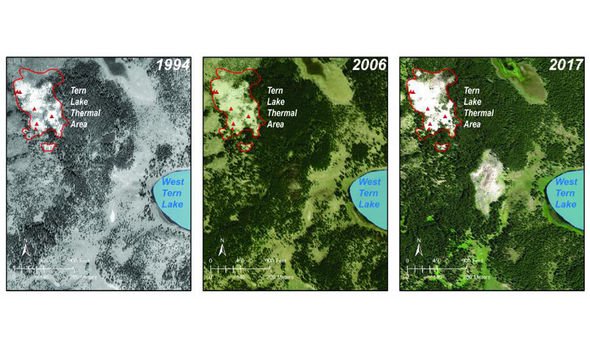 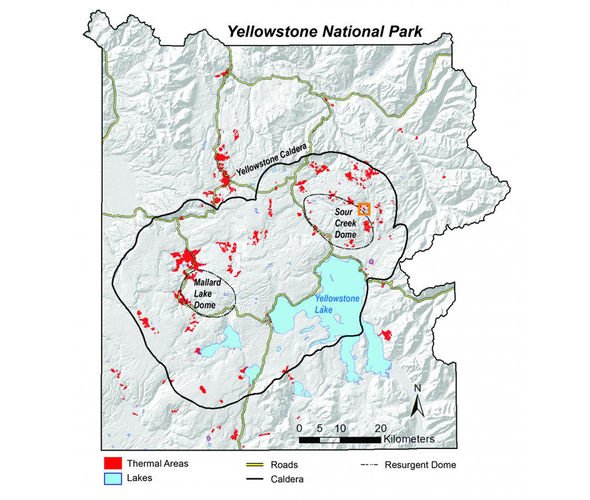 Three years later, the ground had turned a chalky white colour, mimicking the other thermal hotspots throughout Yellowstone.

The YVO geologists said: “These observations raise many questions about the formation and evolution of the thermal area.

“Was a slug of gas released over a broad area first, followed by more localised ground heating, or did the surface warming accompany gas discharge?

“What killed the trees—the gases, or the heat, or both? And why is the vegetation in some areas already recovering?”

Thankfully, the emergence of a new thermal hotspot is not evidence of increased volcanic activity.

According to the YVO, it is instead part and parcel of the life cycle of Yellowstone’s dynamic hydrothermal systems.

The new system appears to simply be an extension of the already existing West Tern Lake hydrothermal feature.

The Yellowstone observatory said: “We have been lucky to witness the birth of a brand new thermal area, and to have been able to visit it and collect data and observations early in its life.”

When did Yellowstone last erupt?

The Yellowstone blast is believed to have erupted more than 1,000 cubic kilometres of rhyolite lava.

The USGS said: ‘Because such enormous amounts of magma were erupted during each explosive event, the roof of the magma-storage regions collapsed, and the ground above subsided by many hundreds of meters to form the calderas.”