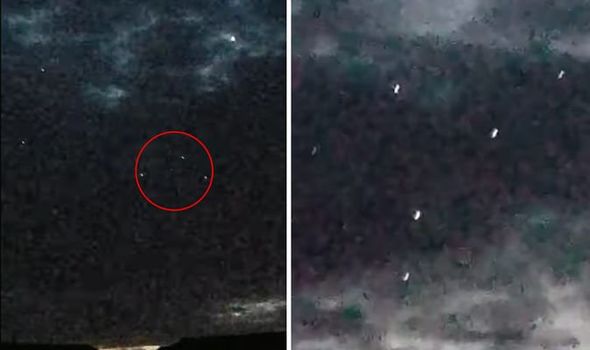 A BIZARRE fleet of bright lights moving quickly across a sky has sparked a frenzy about a “fleet of UFOs” – leaving experts baffled and even prompting a response from the US government.

A mysterious video of a “fleet of UFOs” has sparked worldwide alarm, with some calling the strange moving lights an “armada”. The bizarre footage, captured in the skies of Casper, Wyoming in the US, has sparked alarm among local officials and questions for the US government. In the video, a continuous stream of white objects can be seen flying over the town of Casper.

More than a dozen of the bright objects appear to flash, which seem to be moving in formation in a single direction.

The cameraman can be heard saying: “What is that?’

“Are they drones? They’re either drones or aliens.”

Bradley Ries, who filmed the video last Friday, said: “The lights were heading west towards the airport.

“I think it’s possible it was balloons or possibly drones.

“They weren’t orbs they look like crafts, I thought drones maybe.

“But, if they were drones they had a really long range because they flew clear over the horizon out of sight but they were completely silent and they were pretty close.

“I figured if they were drones I would have heard the propellers but I have no idea what it was, it was a trip.”

Officials at the nearby airport denied any knowledge about the strange lights.

Glenn Januska, Director of Casper Natrona County International Airport said that he wouldn’t be able to identify the lights.

He deferred identification to the Federal Aviation Administration.