The final hours of the famed Gilroy Garlic Festival were shattered Sunday evening when a gunman with an assault rifle opened fire on the crowd, killing three people and injuring 12 others, according to officials in the bucolic California city 30 miles south of San Jose.

A 6-year-old boy was among the victims, according to NBC Bay Area.. 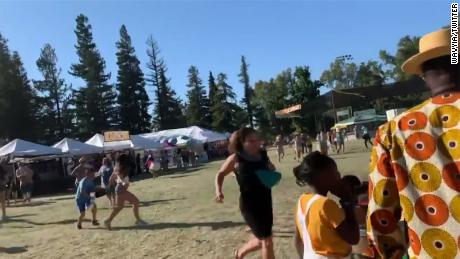 “This is one of those press conferences that you never want to give in your community,” he said. “It’s sort of a nightmare that you hope to never have to live in reality, but we find ourselves in the circumstances where we have to live it today.”

Officials know the identify of the gunman, CNN reported early Monday. Police had not publicly identified him.

The attack happened at 5:41 p.m. as the popular three-day festival wrapped up, leaving visitors running for their lives and police looking for a man in camouflage with a “long-barreled rifle.”

Initial reports said the shooter entered the festival area from a creek area outside of Christmas Hill Park, where the festival was held.

Smithee said the shooter used some type of tool to cut through a fence to get into the festival, avoiding the metal detectors and other security.

Police said a manhunt was underway for a second person with suspected ties to the attack. A description was not released.

“We believe based on witness statements that there was a second individual involved in some way,” Smithee said at a 10 p.m. news conference. “We just don’t know in what way.”

Smithee said he had no information on a possible motive for Sunday’s violence.

Names of the victims were not immediately released, but NBC Bay Area reported late Sunday that one of the victims was Steven Romero, 6. The TV station said family confirmed that Steven was shot along with other family members.

Investigators did not immediately locate a weapon but found at least two magazines at the scene, according to police scanner traffic.

Authorities had the area of the festival and the surrounding woodland on lockdown as they continued their investigation.

A shooting at the Gilroy Garlic Festival has been reported in California. At least 5 people are injured after a suspect in the mass shooting opened fire at Christmas Hill Park in CA.

The band Tin Man was just starting an encore when shots rang out, the AP reported.

Singer Jack van Breen told the AP he saw a man wearing a green shirt and grayish handkerchief around his neck fire into the concession area with what looked like an assault rifle.

Van Breen and other members of the band dove under the stage. Van Breen says he heard someone shout: “Why are you doing this? “and the reply: “because I’m really angry. “

His bandmate Vlad Malinovsky said he heard a lot of shots and then it stopped. Later, law enforcement came by and told the band members and others hiding with them to come out with their hands up, according to the AP.

Judy Lazarus, former president of the garlic association, was at the festival when chaos erupted.

At first, she said, most people assumed the explosions were fireworks, but Lazarus knew fireworks were not part of Sunday’s festivities.

“They didn’t realize what was going on,” she said. “I knew it wasn’t firecrackers.”

She said about 200 people took cover wherever they could. Many moved to the children’s area of an amphitheater on the other side of the festival.

Jane Howard was helping clean up at the Rotary Wine tent when she first heard the gunshots.

At least 11 injuries are being reported after an alleged shooting incident at Gilroy Garlic Festival in California on Sunday, July 28. According to reports, people started running after hearing sounds like gunshots.

“Then people started running toward us,” said Howard, the executive director of Visit Gilroy, which partners with the Gilroy Garlic Festival for the event.

Howard was part of a group of about 50 people that took cover inside a trailer was used to cool wine. They stayed hidden for about 45 minutes until police escorted the group to Las Animas Elementary School, a 10-minute walk from the festival grounds.

At the school, buses took people back to their cars, though Howard’s vehicle and others were parked in areas still roped off by police. Those people were getting rides with friends, family or others in the community.

“We are taking care of each other,” she said.

Howard’s husband picked her up and helped shuttle others back to their homes.

She was stunned by the sudden violence.

“All of us right now just need to decompress and make sure that everyone is safe.”

Necola Adams traveled from Merced to Gilroy to attend the Garlic Festival.

She and a friend left minutes before the shooting started. They were just out of the gate when she heard a volunteer on a two-way radio get a call from someone inside the festival.

There was an active shooter and he was hiding in his truck, she heard the volunteer say.

“The look on that young man’s face, it was terror,” Adams said. “The look on his face let me know it was not a joke.”

Although early videos showed people running out of the festival, Adams said she saw some volunteers running back into the festival grounds. She could hear sirens as she drove away but wasn’t sure what happened until she saw a breaking news alert.

“Grateful for the law enforcement’s efforts and their continued work as this situation develops,” he wrote.

“This is nothing short of horrific. Tonight, CA stands with the Gilroy community.”

Evenny Reyes of Gilroy, 13, told the Mercury News that she spent the day at the Gilroy Garlic Festival with her friends and relatives.

“We were just leaving and we saw a guy with a bandanna wrapped around his leg because he got shot. And there were people on the ground, crying,” Reyes said. “There was a little kid hurt on the ground. People were throwing tables and cutting fences to get out.”

Reyes told the Mercury News that she didn’t run at first because the gunshots sounded like fireworks. “It started going for five minutes, maybe three. It was like the movies — everyone was crying, people were screaming.”

Todd Jones, a sound engineer, told the newspaper that he was at the front of the festival’s Vineyard stage when he heard what sounded like a firework. “But then it started to increase, more rapidly, which sounded more like gunfire, and at that point people realized what was happening,” Jones said.

Gilroy is a city of roughly 50,000 in Santa Clara County.

It’s dubbed the “Garlic Capital of the World,” and the annual garlic festival is a three-day celebration featuring food, cooking competitions and music that attracts more than 100,000 people. Sunday was the final day of this year’s event, the AP reported.