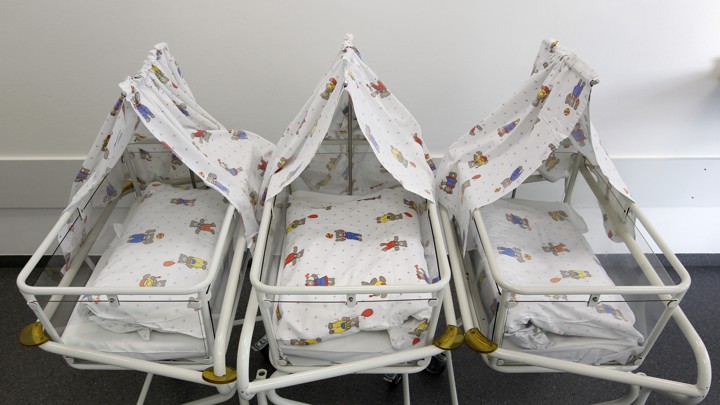 A few years ago, I lived in a walkup apartment in the East Village of New York. Every so often descending the stairway, I would catch a glimpse of a particular family with young children in its Sisyphean attempts to reach the fourth floor. The mom would fold the stroller to the size of a boogie board, then drag it behind her with her right hand, while cradling the younger and typically crying child in the crook of her left arm. Meanwhile, she would shout hygiene instructions in the direction of the older child, who would slap both hands against every other grimy step to use her little arms as leverage, like an adult negotiating the bolder steps of Machu Picchu. It looked like hell—or, as I once suggested to a roommate, a carefully staged public service announcement against family formation.

Apparently, the public got the message. Last year, for the first time in four decades, something strange happened in New York City. In a non-recession year, it shrank.

We are supposedly living in the golden age of the American metropolis, with the same story playing out across the country. Dirty and violent downtowns typified by the “mean streets” of the 1970s became clean and safe in the 1990s. Young college graduates flocked to brunchable neighborhoods in the 2000s, and rich companies followed them with downtown offices.

New York is the poster child of this urban renaissance. But as the city has attracted more wealth, housing prices have soared alongside the skyscrapers, and young families have found staying put with school-age children more difficult. Since 2011, the number of babies born in New York has declined 9 percent in the five boroughs and 15 percent in Manhattan. (At this rate, Manhattan’s infant population will halve in 30 years.) In that same period, the net number of New York residents leaving the city has more than doubled. There are many reasons New York might be shrinking, but most of them come down to the same unavoidable fact: Raising a family in the city is just too hard. And the same could be said of pretty much every other dense and expensive urban area in the country.

In high-density cities like San Francisco, Seattle, and Washington, D.C., no group is growing faster than rich college-educated whites without children, according to Census analysis by the economist Jed Kolko. By contrast, families with children older than 6 are in outright decline in these places. In the biggest picture, it turns out that America’s urban rebirth is missing a key element: births.

Cities were once a place for families of all classes. The “basic custom” of the American city, wrote the urbanist Sam Bass Warner, was a “commitment to familialism.” Today’s cities, however, are decidedly not for children, or for families who want children. As the sociologists Richard Lloyd and Terry Nichols Clark put it, they are “entertainment machines” for the young, rich, and mostly childless. And this development has crucial implications—not only for the future of American cities, but also for the future of the U.S. economy and American politics.

The counties that make up Los Angeles, Chicago, New York City, and Philadelphia shed a combined 2 million domestic residents from 2010 to 2018. For many years, these cities’ main source of population growth hasn’t been babies or even college graduates; it’s been immigrants. But like an archipelago of Ellis Islands, Manhattan and other wealthy downtown areas have become mere gateways into America and the labor force—“a temporary portal,” in the words of E. J. McMahon, the founder of the Empire Center for Public Policy. “The woman from Slovakia comes to Queens, lives in her second cousin’s basement, gets her feet on the ground, and gets a better apartment in West Orange, New Jersey,” he said. Or a 20-something from North Dakota moves to Chicago after school, works at a consultancy for a few years, finds a partner, and moves to Missoula.

But if big cities are shedding people, they’re growing in other ways—specifically, in wealth and workism. The richest 25 metro areas now account for more than half of the U.S. economy, according to an Axios analysis of government data. Rich cities particularly specialize in the new tech economy: Just five counties account for about half of the nation’s internet and web-portal jobs. Toiling to build this metropolitan wealth are young college graduates, many of them childless or without school-age children; that is, workers who are sufficiently unattached to family life that they can pour their lives into their careers.

Cities have effectively traded away their children, swapping capital for kids. College graduates descend into cities, inhale fast-casual meals, emit the fumes of overwork, get washed, and bounce to smaller cities or the suburbs by the time their kids are old enough to spell. It’s a coast-to-coast trend: In Washington, D.C., the overall population has grown more than 20 percent this century, but the number of children under the age of 18 has declined. Meanwhile, San Francisco has the lowest share of children of any of the largest 100 cities in the U.S.

The modern American city is not a microcosm of life but a microslice of it. It’s becoming an Epcot theme park for childless affluence, where the rich can act like kids without having to actually see any.

Okay, you might be thinking, but so what? Happy singles are no tragedy. Childlessness is no sin. There is no ethical duty to marry and mate until one’s fertility has exceeded the replacement rate. What’s the matter with a childless city?

Let’s start with equity. It’s incoherent for Americans to talk about equality of opportunity in an economy where high-paying work is concentrated in places, such as San Francisco and Manhattan, where the median home value is at least six times the national average. Widespread economic growth will become ever more difficult in an age of winner-take-all cities.

But the economic consequences of the childless city go deeper. For example, the high cost of urban living may be discouraging some couples from having as many children as they’d prefer. That would mean American cities aren’t just expelling school-age children; they’re actively discouraging them from being born in the first place. In 2018, the U.S. fertility rate fell to its all-time low. Without sustained immigration, the U.S. could shrink for the first time since World World I. Underpopulation would be a profound economic problem—it’s associated with less dynamism and less productivity—and a fiscal catastrophe. The erosion of the working population would threaten one great reward of liberal societies, which is a tax-funded welfare and eldercare state to protect individuals from illness, age, and bad luck.

This threat sounds hypothetical, but low fertility rates are already roiling Western politics. In a 2017 essay, I explained how low fertility in the U.S. and Europe might be feeding into right-wing populism. The theory went like this: Low natural population growth encourages liberal countries to accept more immigrants. As growth stalls, native-born low- and middle-class workers become frightened of the incipience of foreign workers. To protect themselves, the white petit bourgeoisie turns to retrograde strongmen who promise to wall out foreigners.

Finally, childless cities exacerbate the rural-urban conundrum that has come to define American politics. With its rich blue cities and red rural plains, the U.S. has an economy biased toward high-density areas but an electoral system biased toward low-density areas. The discrepancy has the trappings of a constitutional crisis.  The richest cities have become magnets for redundant masses of young rich liberals, making them electorally impotent. Hillary Clinton won Brooklyn by 461,000 votes, about seven times the margin by which she lost Pennsylvania, Michigan, and Wisconsin combined. Meanwhile, rural voters draw indignant power from their perceived economic weakness. Trump won with majority support in areas that produce just one-third of GDP by showering hate and vitriol on cities that attract immigration and capital.

Is there a solution to the childless city?

Surely, downtown areas can be made more family-friendly. Mayors can be more aggressive about overcoming the forces of NIMBYism by building affordable housing near downtown areas. The federal government can help. The trouble is that some of the causes are too big for any metro to solve.

If global demographics had a television show, it’d be called “No Sex in the City.” Across the developed world, couples aren’t just having fewer children. They’re having less sex, as Kate Julian has reported—and my podcast Crazy/Genius has explored. The possible culprits of this “sex recession” include “hookup culture, crushing economic pressures, surging anxiety rates, psychological frailty, widespread antidepressant use, streaming television, environmental estrogens leaked by plastics, dropping testosterone levels, digital porn, the vibrator’s golden age, dating apps, option paralysis, helicopter parents, careerism, smartphones, the news cycle, information overload generally, sleep deprivation, [and] obesity.” The trend extends far beyond the U.S. According to the Japan Family Planning Association, 45 percent of women ages 15–24 “were not interested in or despised sexual contact,” and more than a quarter of men said they felt the same way.

Even couples in affluent countries who are having sex might be naturally happy with fewer children. As the cost of child care has soared relative to income, it’s proven quite difficult for public policy to encourage couples to have more kids. The nation of Hungary is experimenting with perhaps the most aggressive pro-fertility policy in the developed world, with housing benefits and large tax exemptions for children far greater than what’s offered in the U.S. That nation’s fertility rate is still extremely low and far beneath the replacement rate, which might suggest that couples in advanced economies—and, in particularly, educated mothers in advanced economies—simply don’t want more children.

For those young and middle-aged Americans who are having sex and having children, the smaller cities and suburbs might simply be a better place to live—and not just for the obvious reason that they’re more cost-friendly for the non-rich. Perhaps parents are clustering in suburbs today for the same reason that companies cluster in rich cities: Doing so is more efficient. Suburbs have more “schools, parks, stroller-friendly areas, restaurants with high chairs, babysitters, [and] large parking spaces for SUV’s,” wrote Conor Sen, an investor and columnist for Bloomberg. It’s akin to a division of labor: America’s rich cities specialize in the young, rich, and childless; America’s suburbs specialize in parents. The childless city may be inescapable.

In two weeks, as it happens, I’m moving from New York City to Washington, D.C., into a building that was once a women’s hospital. For 150 years, since its founding in 1866, the facility specialized in delivering babies; it saw more than 250,000 new souls brought into the world, including Duke Ellington and Al Gore. The building used to be a piece of history; today it’s a demographic metaphor for the future of the American city: They gutted the maternity ward and put up a condo.