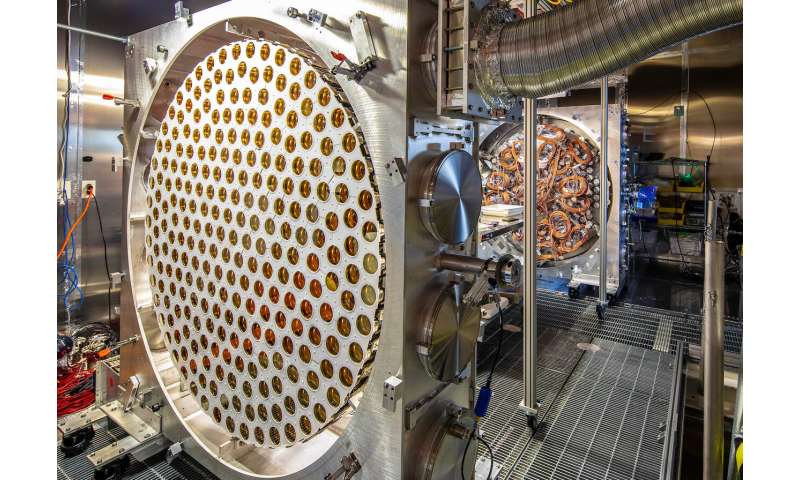 Most of the remaining components needed to fully assemble an underground dark matter-search experiment called LUX-ZEPLIN (LZ) arrived at the project’s South Dakota home during a rush of deliveries in June.

When complete, LZ will be the largest, most sensitive U.S.-based experiment yet that is designed to directly detect dark matter particles. Scientists around the world have been trying for decades to solve the mystery of dark matter, which makes up about 85 percent of all matter in the universe though we have so far only detected it indirectly through observed gravitational effects.

The bulk of the digital components for LZ’s electronics system, which is designed to transmit and record signals from ever-slight particle interactions in LZ’s core detector vessel, were among the new arrivals at the Sanford Underground Research Facility (SURF). SURF, the site of a former gold mine now dedicated to a broad spectrum of scientific research, was also home to a predecessor search experiment called LUX.

A final set of snugly fitting acrylic vessels, which will be filled with a special liquid designed to identify false dark matter signals in LZ’s inner detector, also arrived at SURF in June. 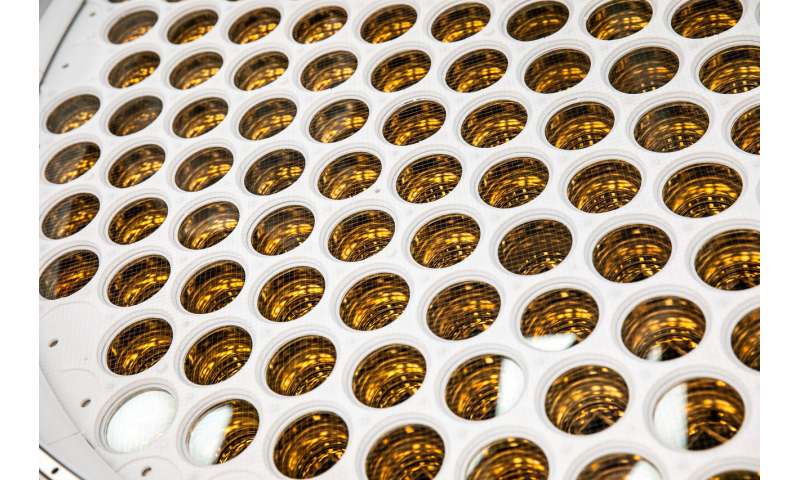 “LZ achieved major milestones in June. It was the busiest single month for delivering things to SURF—it was the peak,” said LZ Project Director Murdock Gilchriese of the Department of Energy’s Lawrence Berkeley National Laboratory (Berkeley Lab). Berkeley Lab is the lead institution for the LZ project, which is supported by an international collaboration that has about 37 participating institutions and about 250 researchers and technical support crew members.

“A few months from now all of the action on LZ is going to be at SURF—we are already getting close to having everything there,” Gilchriese said.

Mike Headley, executive director at SURF, said, “We’ve been collectively preparing for these deliveries for some time and everything has gone very well. It’s been exciting to see the experiment assembly work progress and we look forward to lowering the assembled detector a mile underground for installation.”

All of these components will be transported down a shaft and installed in a nearly mile-deep research cavern. The rock above provides a natural shield against much of the constant bombardment of particles raining down on the planet’s surface that produce unwanted “noise.”

LZ components have also been painstakingly tested and selected to ensure that the materials they are made of do not themselves interfere with particle signals that researchers are trying to tease out. 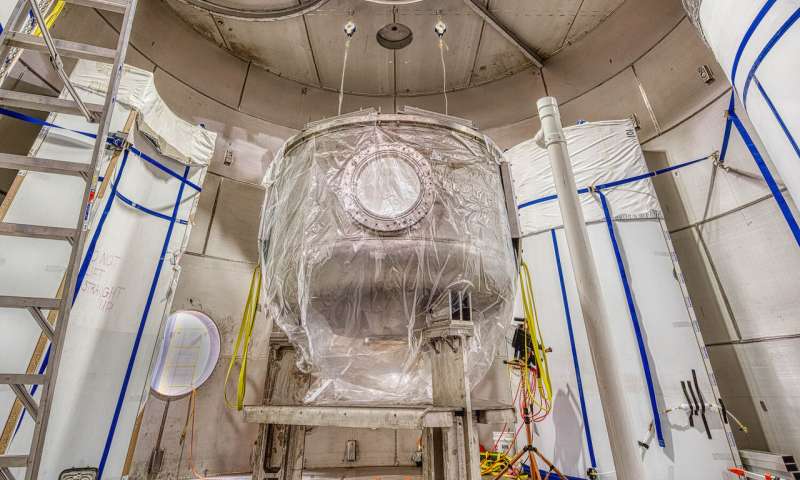 LZ is particularly focused on finding a type of theoretical particle called a weakly interacting massive particle or WIMP by triggering a unique sequence of light and electrical signals in a tank filled with 10 metric tons of highly purified liquid xenon, which is among Earth’s rarest elements. The properties of xenon atoms allow them to produce light in certain particle interactions.

Proof of dark matter particles would fundamentally change our understanding of the makeup of the universe, as our current Standard Model of Physics does not account for their existence.

Assembly of the liquid xenon time projection chamber for LZ is now about 80 percent complete, Gilchriese said. When fully assembled later this month this inner detector will contain about 500 photomultiplier tubes. The tubes are designed to amplify and transmit signals produced within the chamber.

Once assembled, the time projection chamber will be lowered carefully into a custom titanium vessel already at SURF. Before it is filled with xenon, this chamber will be lowered to a depth of about 4,850 feet. It will be carried in a frame that is specially designed to minimize vibrations, and then floated into the experimental cavern across a temporarily assembled metal runway on air-pumped pucks known as air skates.

Finally, it will be lowered into a larger outer titanium vessel, already underground, to form the final vacuum-insulated cryostat needed to house the liquid xenon. 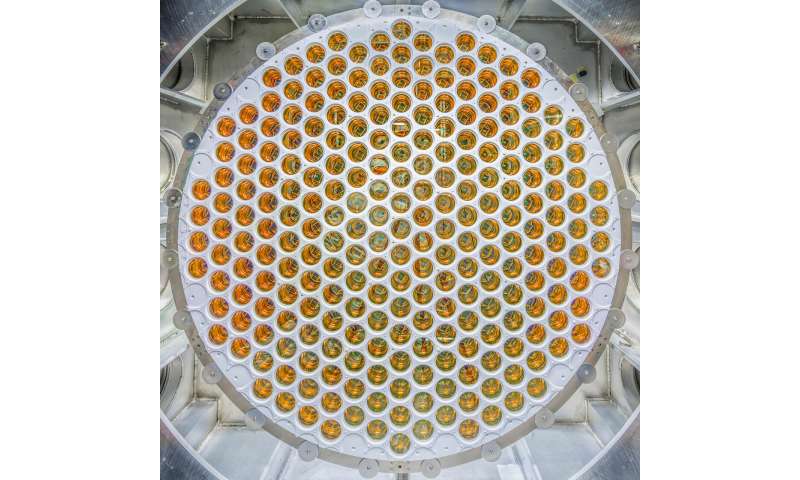 “It will certainly be the most stressful—this is the thing that really cannot fail. Once we’re done with this, a lot of our risk disappears and a lot of our planning becomes easier,” he said, adding, “This will be the biggest milestone that’s left besides having liquid xenon in the detector.”

Project crews will soon begin testing the xenon circulation system, already installed underground, that will continually circulate xenon through the inner detector, further purify it, and reliquify it. Fiorucci said researchers will use about 250 pounds of xenon for these early tests.

Work is also nearing completion on LZ’s cryogenic cooling system that is required to convert xenon gas to its liquid form.

LZ digital electronics, which will ultimately connect to the arrays of photomultiplier tubes and enable the readout of signals from particle interactions, were designed, developed, delivered, and installed by University of Rochester researchers and technical staff at SURF in June. 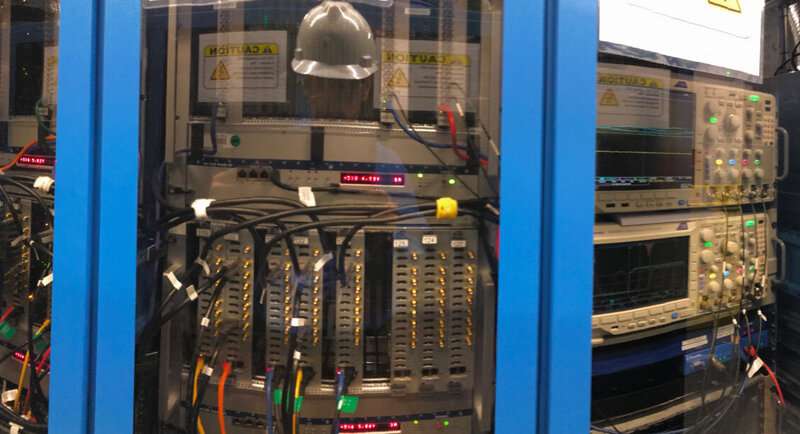 “All of our electronics have been designed specifically for LZ with the goal of maximizing our sensitivity for the smallest possible signals,” said Frank Wolfs, a professor of physics and astronomy at the University of Rochester who is overseeing the university’s efforts.

He noted that more than 28 miles of coaxial cable will connect the photomultiplier tubes and their amplifying electronics—which are undergoing tests at UC Davis—to the digitizing electronics. “The successful installation of the digital electronics and the online network and computing infrastructure in June makes us eager to see the first signals emerge from LZ,” Wolfs added.

Also in June, LZ participants exercised high-speed data connections from the site of the experiment to the surface level at SURF and then to Berkeley Lab. Data captured by the detectors’ electronics will ultimately be transferred to LZ’s primary data center, the National Energy Research Scientific Computing Center (NERSC) at Berkeley Lab via the Energy Sciences Network (ESnet), a high-speed nationwide data network based at Berkeley Lab.

The production of the custom acrylic tanks (see related article), which will contain a fluid known as a liquid scintillator, was overseen by LZ participants at University of California,Santa Barbara.

“The partnership between LZ and SURF is tremendous, as evidenced by the success of the assembly work to date,” Headley said. “We’re proud to be a part of the LZ team and host this world-leading experiment in South Dakota.” 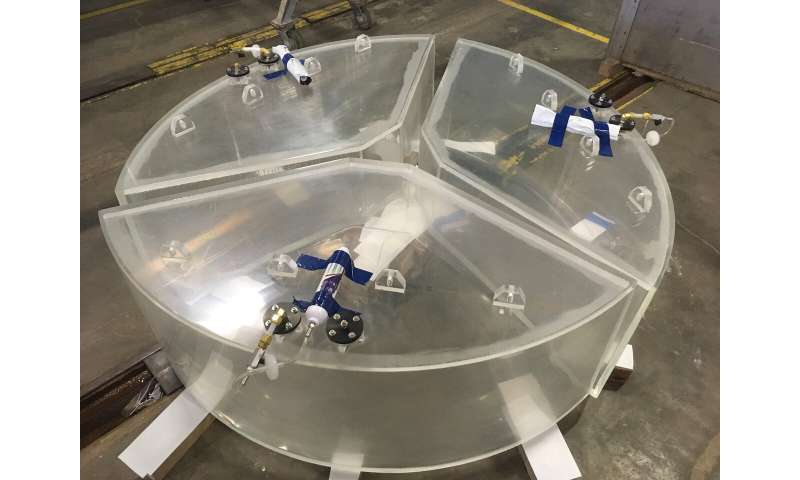 Read More:Are We Detecting An Electrical Charge From Dark Matter?

Read More:‘Dark Fluid’ With Negative Charge Is Latest Idea Astrophysicists Are Throwing Around To Explain The Way Dark Matter Behaves