The city of Boston, Mass. is being sued for religious discrimination for banning the Christian flag while permitting 284 others, according to a federal lawsuit filed last week.

Hal Shurtleff, the director and co-founder of Camp Constitution, asked the city to fly the Christian flag, an inter-denominational symbol, as part of Constitution Day on Sep. 17, 2017, for a one-hour event. But the city banned its appearance, saying no non-secular flags could be flown.

“There’s no question that it is an unconstitutional act and originally said it was a violation of the First Amendment, which I find ironic,” Shurtleff told Fox News. “I’m optimistic the lawsuit will go our way.”

Shurtleff said the city would have accepted it if they had called it the Camp Constitution flag instead of the Christian flag. The group was planning an event with pastors encouraging racial reconciliation, freedom in the United States, and celebrating the link between Christianity and the United States, ending with the presentation of the Christian flag. But after the city’s rejection, the event was canceled. 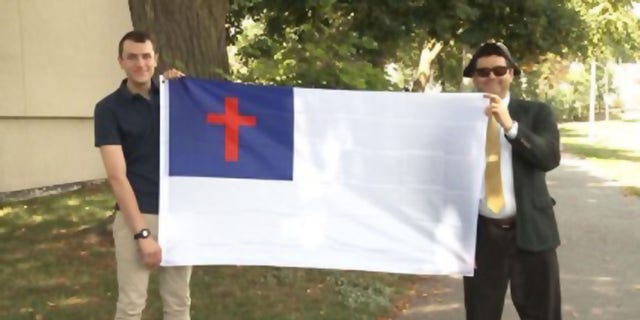 Nathaniel Shurtleff, counselor, and Tom Moor, instructor, for Camp Constitution hold the Christian flag, which was not allowed to fly by the city of Boston in 2017 and 2018. Now the group is suing the city for religious discrimination.  (Camp Constitution)

Matthew Staver, founder and chairman of Liberty Counsel, a religious freedom law firm representing Shurtleff, slammed the city for the decision, which they made again in 2018.

“Censoring religious viewpoints in a public forum where secular viewpoints are permitted violates the First Amendment,” Staver said in a statement. “Boston city officials may not ban the Christian flag as part of a privately-sponsored event when they allow any other flag by numerous private organizations. It’s time for the court to stop the city’s unconstitutional censorship.”

A federal court and appeals court previously ruled against Shurtleff, but the new lawsuit has new “key facts” that Liberty Counsel believes will “compel a result in Camp Constitution’s favor.”

One is that the city allowed the Turkish flag — with its Islamic star and crescent — to be raised on city hall flagpoles 13 times since 2005, according to the suit. The city has also allowed the Communist Chinese flag to commemorate the anniversary of the Chinese Communist revolution, Cuban, and Vatican flags to fly along with transgender and LGBTQ flags, which were not mentioned in the lawsuit.

“Yet, despite all of these many flag raisings containing religious symbols and imagery, and the City’s allowing the official flag of the Catholic Church, Camp Constitution’s proposed flag raising was denied because it was ‘religious,’” the suit states. “There can be no dispute that the City’s denial impermissibly discriminated between religion and non-religion, and discriminated between religious sects. Both violate the Establishment Clause.”