The two powerful earthquakes that rocked the Mojave Desert this month were part of a swarm of thousands of other earthquakes, many too weak to be felt, that continue to hit the area every few minutes.

Although the remote area was known to be seismically active and geologically complex, the earthquakes were sprinkled around a pair of neighboring geologic faults that scientists had not specifically known about before.

“I think if you’d talked to most geologists before these earthquakes, they’d have said, ‘Any fault capable of a 7, we should have seen,’ ” said Ross Stein, a geophysics professor at Stanford University, referring to the July 5 earthquake.

Mapping aftershocks in the area reveals how such large quakes change the stresses in the ground around them and set off other earthquakes nearby. It also sketches the outlines of two faults running roughly perpendicular to each other.

The 6.4-magnitude earthquake on July 4 was a precursor, or foreshock, to the much larger 7.1-magnitude quake the next evening, which released about 11 times more energy than the first. It is not unusual for two strong quakes to occur on related faults within a few days of each other, but it is relatively uncommon for the second to be larger than the first.

“Once a large earthquake has happened, the odds of another large earthquake are as high as you’re ever going to see,” said Susan Hough, a seismologist at the United States Geological Survey.

That’s because powerful earthquakes often trigger more quakes nearby. Each of the thousands of aftershocks triggered by the July 5 earthquake has a tiny chance of being strong but is much more likely to be weak. More aftershocks mean more rolls of the dice, increasing the odds that at least one aftershock will be severe. Some scientists are concerned that the continuing aftershocks from the earthquake on July 5 could set off stronger quakes on other important faults in the area.

While many of the aftershocks have been too small to feel, the 7.1-magnitude earthquake on July 5 caused sporadic power failures in Los Angeles and swayed the stands in Dodger Stadium, about 125 miles away.

The earthquakes could help researchers understand how multiple strong quakes can happen on connected faults. Fault maps of the area that were last updated in the mid-1990s show many short, disconnected faults. But the pattern of aftershocks, along with new cracks and surface ruptures that cover about 30 miles, revealed the short faults to be more connected than depicted on the maps.

“We’d like to think we know about all of the faults of that size and their prehistory, but here we missed it,” Dr. Stein said.

“The geologists in this area are the very best — people aren’t asleep at the wheel,” he said. “But there are real opportunities for young scientists to come in and learn how to do this better.”

The large earthquakes in the desert were two heavy beats in a constant, irregular rhythm of tremors that traces California’s geologic faults.

Most of these quakes across California are tiny. A handful are large enough for people to notice. But the constant rumble of seismic activity is a reminder that, given enough time, a devastating earthquake could eventually hit the state. 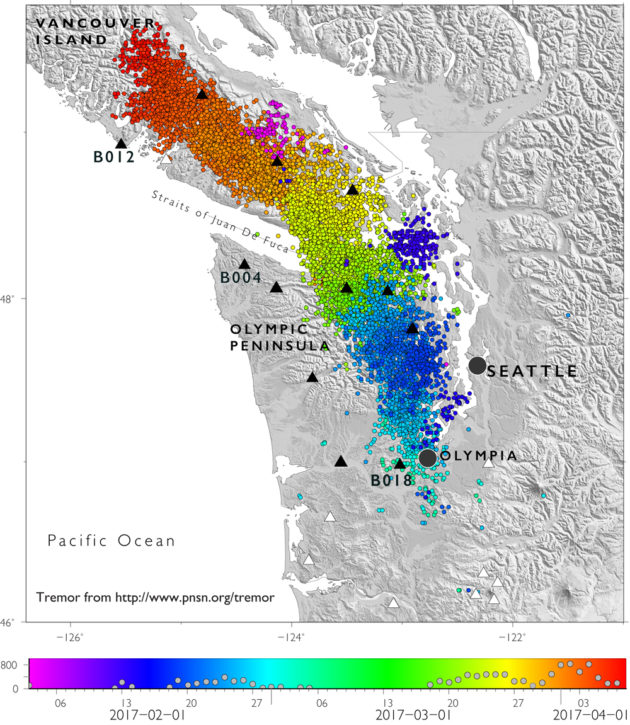 The top chart shows earthquakes within 50 miles of Ridgecrest, Calif. What appears to be a gap in small aftershocks immediately after the 7.1-magnitude earthquake is because of the vibrations from large aftershocks drowning out smaller ones. For similar reasons, the locations for some aftershocks shown on the regional map may be inaccurate.