An upcoming heat wave could lead to power outages in the central and eastern U.S., including the major metropolitan areas of New York City, Washington and Chicago, experts say.

As temperatures rise and more people turn to their air conditioners for relief, the demand for power can become overwhelming. Power companies are preparing for the worst and asking customers to be mindful of their electricity use.

“The demand for power can increase as the heat wave goes on because people become less resistant – more willing to turn their air conditioning on and up,” said Allan Drury, a spokesman for Con Edison in New York.

A widespread blackout Saturday  in New York City left much of Manhattan without electricity. That outage was caused not by heat but by a transformer fire, according to New York fire officials. Con Edison estimates that about 73,000 people were without power during the blackout.

With temperatures forecast to reach 100 degrees in New York City by Saturday, according to the Weather Channel, Con Edison warned of additional blackouts, though on a smaller scale.

With heat and humidity as intense as predicted, Con Edison is prepared for “scattered outages” in Manhattan and parts of Brooklyn, Queens and the Bronx, Drury said Tuesday.

Manhattan is served exclusively by underground delivery systems that inevitably heat up as the ground warms, and those systems are further strained by increased demand for power, Drury said. 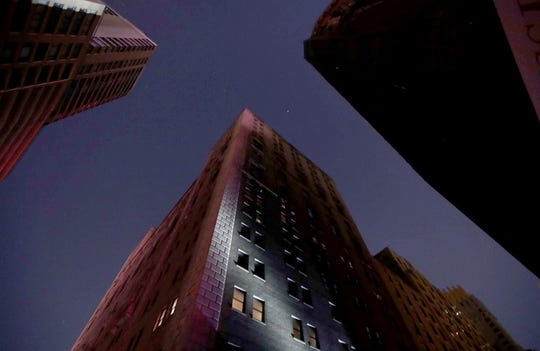 Buildings in Manhattan were without power after an outage July 13, 2019. (Photo: Seth Harrison, The Journal News-USA TODAY NETWO)

Jay Apt, a professor and co-director of the Carnegie Mellon Electricity Industry Center, said his data doesn’t show more frequent blackouts in summer than winter, except during hurricanes.

“There is always high demand in the summer – air conditioning is very power-intensive, and you will always have some failures of equipment,” Apt said.

Con Edison said Tuesday that demand for power in Westchester County and New York City was 10,541 megawatts. On Friday, when temperatures are forecast to be in the mid-90s, Con Edison is predicting a power demand of 12,400 megawatts, Drury said.

That is well below the highest demand for power in history, Drury said, which happened during a heat wave in July 2013. It peaked at 13,322 megawatts.

The Washington area, which also is served primarily by underground systems, also is expecting extreme heat and humidity this week. Christina Harper, a spokeswoman for Pepco, said the city’s primary public utility company is preparing for power outages, although it is not necessarily expecting them.

Temperatures in the D.C. metro area are expected to reach the high 90s this week, according to the Weather Channel, and could top 100 on Saturday.

“We are ready,” Harper said. She encouraged all customers to download the Pepco app, which will allow them to easily report a power outage and access an interactive map of local outages.

Officials from ComEd in Chicago also are preparing for extreme temperatures – Friday is forecast to be the hottest, with a high of 96 degrees, according to the Weather Channel.

“When you have extreme weather of any kind, it can put stress on any system and can cause outages,” said Terence Donnelly, the company’s president and chief operating officer. “We’re watching the pending hot weather moving into our system very closely, we have scheduled our emergency response center to open up, and we have scheduled extra crews scheduled to work extra hours.”

Here are some ways to stay cool and prevent losing power, according to Con Edison, Pepco and ComEd:

Read More:It’s All Crumbling…NYC Power Outages Continue, GPS Satellites Failing- Tech Is Collapsing At An Increasing Rate: Why Do You Think This Is?