Stephen Vedder used to enjoy peaceful lakeside runs near his Marlborough, Mass., home. This spring, after years of coexisting with an ornery neighbor, those tranquil outings came to an end.

It started with a whack to the back of the head. Next, Mr. Vedder was divebombed. Then clawed.

The culprit was a red-winged blackbird.

More than 250 million of the birds live across North and Central America, and this summer some are feeling extra aggressive toward human neighbors—driving them to change walking routes, wear protective headgear or furiously wave arms above their heads as they jog.

“You talk to people about being attacked by birds, and they look at you like you’re crazy,” says Mr. Vedder, a 60-year-old programmer. “This is ‘The Birds’ all over again, but it’s real!”

Many people who have long lived in harmony with the birds have noticed an uptick in their aerial assaults this season. Bird-on-human attacks are growing more common as people encroach on their habitats, says Lori Naumann, information officer at the Minnesota Department of Natural Resources.

As red-winged blackbirds nest from April to the end of July, it is the males’ job to defend their mates and young. “It’s kind of like getting between a mama bear and her cub,” Ms. Naumann says.

Wielding an umbrella or swinging a broom over the head can offer defense, she says. The birds will typically attack the highest point.

Matt Esler waves his arms while running where he has been repeatedly attacked. The 43-year-old real-estate agent initially felt alone in his struggle against a bird he nicknamed Nemesis. 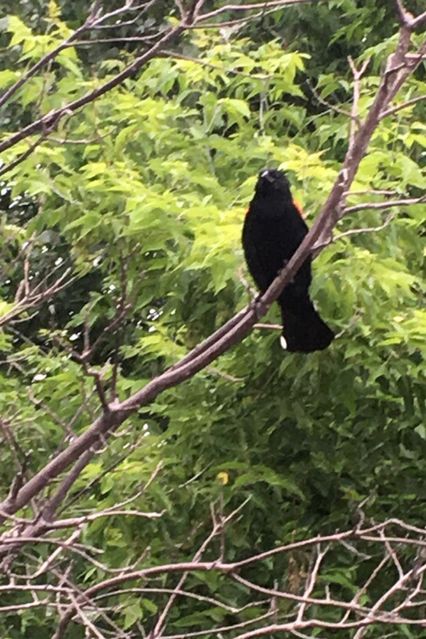 While jogging, Matt Esler waves his arms to fend off a red-winged blackbird he nicknamed Nemesis, right. Photos: Matt Esler(2)

He had run around a lake in his neighborhood for six years without an attack. This year, he has fended off a blackbird every run, at one point wearing a hoodie for protection. When he shared his experience on Facebook, a dozen others in his area of Richfield, Minn., aired their grievances.

Brad Ray, 49, a friend of Mr. Esler’s, felt something hit the back of his head while he was managing a walking club as program director for a senior-living community in Richfield. He looked around and saw a squawking blackbird staring him down from a tree. He and Mr. Esler think it was Nemesis.

Parks departments and natural resource offices across several states also recorded an increase this spring of hawk and wild-turkey attacks.

Crows can turn hostile to protect fledglings. CrowTrax, an interactive online map, tracks their attacks across the world. Anyone can add a crow to the map and tell a story of bird violence.

“Just about everybody has an example of a crow attack,” says Jim O’Leary of Vancouver, British Columbia, who started CrowTrax in 2016 after a crow turned his neighborhood into a war zone, he says.

He has received more than 5,000 reports, with a slight increase this year, but that hasn’t helped him avoid attacks. “The crows don’t look at the website.”

To understand a belligerent blackbird, one must appreciate its point of view, says Kevin McGowan, a professor at Cornell University’s Lab of Ornithology.

The males become aggressive only during nesting season, and “they’re trying to be a protective parent,” says Dr. McGowan, who has experience getting strafed. “We can all respect it even if we don’t want them whacking us in the back of the head.”

One of the most abundant songbirds in North America, red-winged blackbirds can usually be found around wetlands, marshes and grassy fields. These habitats are shrinking, with 60,000 freshwater wetland acres lost annually, according to the U.S. Fish and Wildlife Service.

When regular habitats aren’t available, says Dr. McGowan, the birds will move closer to humans. They like to attack from behind and will probably stay away if you keep them in your line of sight, he says.

Eric Fischl, a 46-year-old writer from Florence, Mont., found himself repeatedly under assault by what he calls “avian scoundrels” in one spot as he bicycled. “I don’t know if it’s because I was wearing black and had red gloves or what,” he says, speculating the bird confused him for a rival.

Faye Park, 48, worries her dark hair attracts a red-winged blackbird that swoops by her head every time she runs past a lake near her Denver home. She had run by a flock of the birds for years. Only in the past six months has one begun bombarding her, a few times a week. “All of the sudden it got very aggressive,” says Ms. Park, president of a public-interest group. “I have no idea why.”

She avoids the lake’s south side, worried she’ll attract the bird’s friends and get swarmed.

Jo Fessett, 62, a bird-watcher and assistant to the executive director of the Illinois Audubon Society, says red-winged blackbirds chase her while she’s cycling. She calls them her escorts.

Mr. Vedder in Massachusetts dug up a slingshot after getting into a squawking match with his bird one day—“I’m yelling at him, and he’s yelling at me”—but shelved it after learning the birds are protected by the federal Migratory Bird Treaty Act. The Fish and Wildlife Service lists a maximum fine of $15,000 and possible jail time for violating the 1918 law.

He toyed with gluing plastic googly eyes onto his hat, then switched his jogging route to a path by fast-moving traffic. “My family knows if I ever get killed by a car, it’s the blackbird’s fault.”

Read More:Migratory Birds Now Hitting Planes At A Rate Of 40X Per Day; What Is Causing The Uptick In Collision Encounters