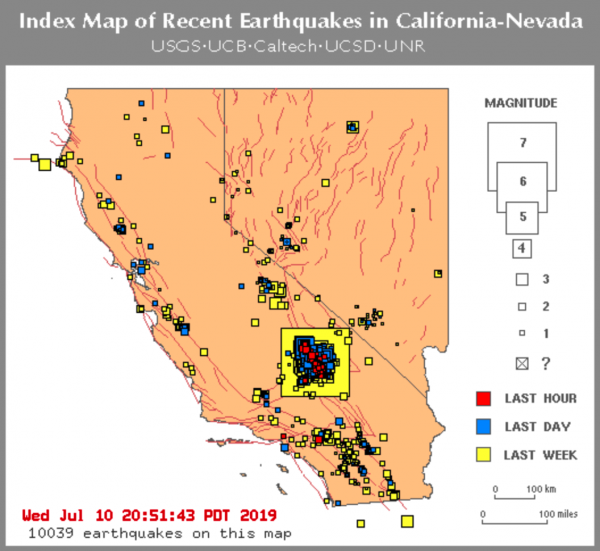 The ground is constantly shaking in southern California right now, and this has many concerned that another large earthquake may be coming.

I have been keeping my eye on Cal Tech’s recent earthquake map, and as I write this article it says that there have been 10,953 earthquakes in California and Nevada over the past 7 days. I have never seen that number so high, and southern California is being hit by yet another new earthquake every few moments.

Could it be possible that all of this earthquake activity is leading up to something really big?

And it isn’t just earthquakes that we need to be concerned about. According to Fox News, “geologists are nervously eyeing eight nearby volcanoes:”

California’s uncanny “earthquake pause” is over. It should have already had several “big ones” by now. All that pressure has to go somewhere. Now geologists are nervously eyeing eight nearby volcanoes. And why has Yellowstone supervolcano been acting so weird?

The U.S. Geological Survey (USGS) has warned Southern California to expect more big earthquakes to come. Some, they say, may even be more powerful than those experienced in the past few days.

“(These quakes do) not make (the Big One) less likely,” local seismologist Lucy Jones told The Los Angeles Times. “There is about a one in 20 chance that this location will be having an even bigger earthquake in the next few days, that we have not yet seen the biggest earthquake of the sequence.”

Could you imagine the chaos that would ensue if a volcano suddenly erupted in California?

For the record, I am personally far more concerned about Mt. Rainier and the other volcanoes in the Northwest. But that is a topic for another article.

And the nuclear reactors

One angle that hasn’t really been talked about much is what would happen to California’s nuclear reactors if “the Big One” suddenly hit the San Andreas fault.

According to Natural News, there are currently five nuclear reactors right along the San Andreas fault and another one that is located directly along the coast…

A Natural News investigation into the geolocation of nuclear power facilities in California reveals that five nuclear facilities were built in close proximity to the San Andreas fault line, with some constructed right in the middle of earthquake zones that have up to a 50% chance of a severe earthquake every 30 years.

One nuclear power plant – the Diablo Canyon Nuclear Power Plant which produces 2,160 megawatts — was constructed on the coast, making it extremely vulnerable to the very same kind of ocean water surge that destroyed the Fukushima-Daiichi facility which suffered a 2011 meltdown in Japan.

Who was the genius that decided to build those reactors near the San Andreas fault?

The potential for an unprecedented nightmare is definitely there. If a magnitude 9.0 earthquake were to hit the San Andreas fault, it would be 707 times more powerful than the magnitude 7.1 earthquake that we just witnessed.

And we live at a time when our planet just continues to become even more unstable.  According to NBC News, the number of “great” earthquakes between 2004 and 2014 was 265 percent higher than during the preceding ten year period:

The annual number of “great” earthquakes nearly tripled over the last decade, providing a reminder to Americans that unruptured faults like those in the northwest United States might be due for a Big One.

Between 2004 and 2014, 18 earthquakes with magnitudes of 8.0 or more rattled subduction zones around the globe. That’s an increase of 265 percent over the average rate of the previous century, which saw 71 great quakes, according to a report to the annual meeting of the Geological Society of America this week in Vancouver, British Columbia.

Of course seismic activity is just one element of “the perfect storm” that is starting to unfold. According to NOAA, the 12 month period ending in June was the wettest 12 month period in all of U.S. history. In fact, for three months in a row “the past 12-month precipitation record has hit an all-time high”.  We just keep setting record after record, and the flooding in the middle of the country seems like it will never end. Millions of acres of prime farmland will not be used at all this year, and tens of millions of acres of crops are in extremely poor condition right now.

Meanwhile, a monster storm is heading directly for New Orleans, and on Wednesday it dumped “7 inches of rain within a three-hour period” on the city:

Lines of thunderstorms associated with a weather system that is predicted to develop into a hurricane by Friday struck New Orleans with as much as 7 inches of rain within a three-hour period Wednesday morning, forecasters said.

The city was engulfed with water, leaving residents to contend with swampy streets, overturned garbage cans and flooded vehicles. Some even paddled their way down the street in kayaks.

But the worst is still yet to come.  The storm may become a hurricane before it makes landfall, and it is going to push the Mississippi River to one of the highest levels ever:

The deluge may have just been a preview of more serious flooding situation from Tropical Storm or Hurricane Barry, which could affect the area into the weekend.

On Saturday, the Mississippi River is projected to see one of its highest crests on record in New Orleans, or the highest in seven decades.

A state of emergency has already been declared in Louisiana, and this could turn out to be the biggest disaster for the state since Hurricane Katrina.

Why is disaster after disaster suddenly pummeling the United States? And could it be possible that this is just the beginning of our problems?

A time of great change is now upon us, and I have a feeling that what we have experienced so far is just the tip of the iceberg.