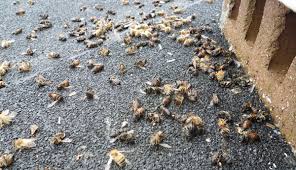 The powerful 7.1 magnitude quake struck near the city of Ridgecrest on Friday, causing widespread fires and gas line ruptures.

No casualties were reported but disturbing new footage that that may not be the case.

YouTube star Khalil Underwood was left horrified to discover thousands of bees lying dead on the ground outside his house.

In a video posted to Twitter on Saturday, he said: “Last night when I said there were a million bees on the floor, nobody believed me and you couldn’t see it in the dark.

“This is what I f***ing meant, look how many bees are on the floor after the f***ing earthquake.”He later wrote: “I wasn’t exaggerating or joking… after the earthquake thousands of bees were vibrating on the floor and dying… this shit was so crazy to me.”Viewers flocked to the comments section to suggest what they thought had caused the bizarre incident.

Some suggested the quake had distorted the magnetic fields that the bees’ brains relied upon, while others believed they had evacuated their hive in a panic.

While the real reason for the sight is hard to explain, scientists have often noted how animals and insects can act strangely in the lead-up to an earthquake.One study in Northern Taiwan that monitored insect populations over a period when a 7.3 and 6.8 earthquake hit, noted ‘large declines’ in the number of individual insects and also individual species.The 7.1-magnitude quake struck just a day after a 6.4 magnitude quake hit the same area on Thursday.
California lies in the Ring of Fire basin, where many earthquakes and volcanic eruptions occur.Back in the UK, there are rising fears of an Asian hornet invasion.And footage emerged last week of a swarm of wasps surrounding a car in Liverpool.

Read More:Migratory Birds Now Hitting Planes At A Rate Of 40X Per Day; What Is Causing The Uptick In Collision Encounters?