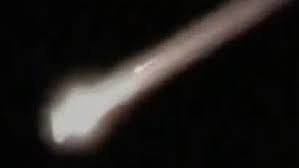 A long-lasting fireball that broke into several pieces over South Florida this morning was a piece of space junk expected to fall to Earth today.

Maj. Cody Chiles, spokesman of the US Air Force’s the Joint Force Space Component Command, said the debris was a Chinese CZ3 rocket body reentering the atmosphere of the southeastern portion of the country.

Chiles said the Air Force was tracking the debris, which many Floridians saw glow and break up around 2:15 a.m.

“I wasn’t even sure what I was seeing,” said David Larenas, who was driving on Hypoluxo Road west of Lantana when he noticed the sky light up. “It looked like something out of the movies with this fireball and a long tail that was kind of like a cloud.”

Mike Hankey, the operations manager for the American Meteor Society, said earlier this morning he was “100 percent sure” the lights were space debris breaking up in the atmosphere.

According to the website Satview.org, a piece of space junk was expected to reenter the atmosphere at about 7 a.m. this morning.

More than 20 people in Florida from St. Augustine to Key West reported seeing the fireball on the AMS website.

Paxton Fell, a meteorologist with the National Weather Service in Miami, said her office is looking into this morning’s reports.

“We don’t have any confirmation of what it could be yet,” she said.

But Hankey said space debris has several characteristics that meteors don’t, including it moves slower across the sky and the fragmentation is more intense.

“Basically, every little nut or bolt in a satellite or rocket engine will turn into a fireball in the sky, so this has a very distinctive look,” he said. “A lot of people saw it or got videos of it because it was hanging in the sky for so long.”

That gave them ample time to pull out their cell phones and hit record, which rarely happens with natural fireballs, Hankey said.

Read More:Multiple Objects Fall From The Sky In Florida