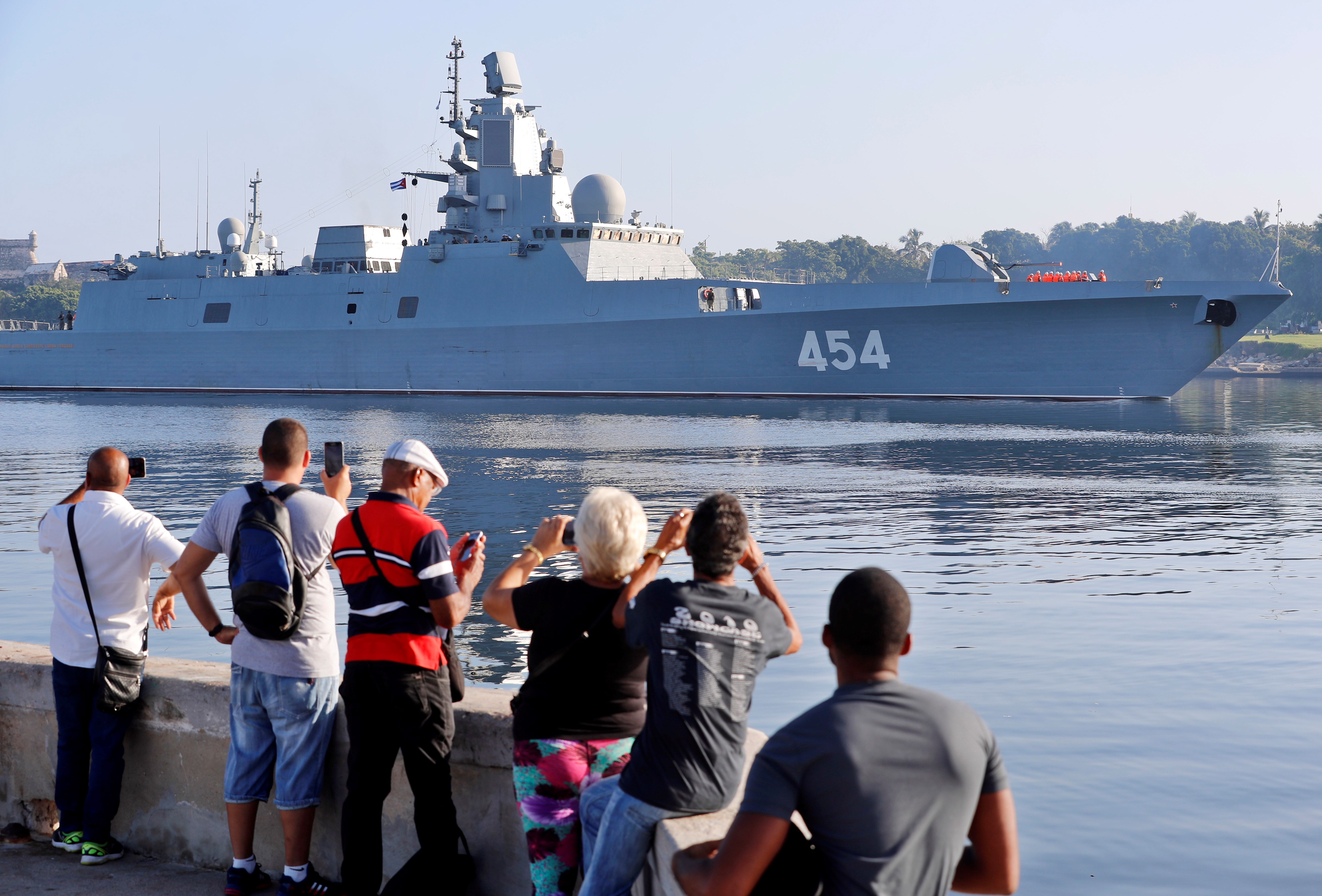 RUSSIA has warned the US its build-up of weapons in Europe risks a repeat of the Cuban missile crisis – as a Moscow warship docked near Havana yesterday.

Russian Deputy Foreign Minister Sergei Ryabkov said on Monday that US plans to deploy missile systems near the Russian border risks a nuclear standoff on a par with the height of the Cold War. 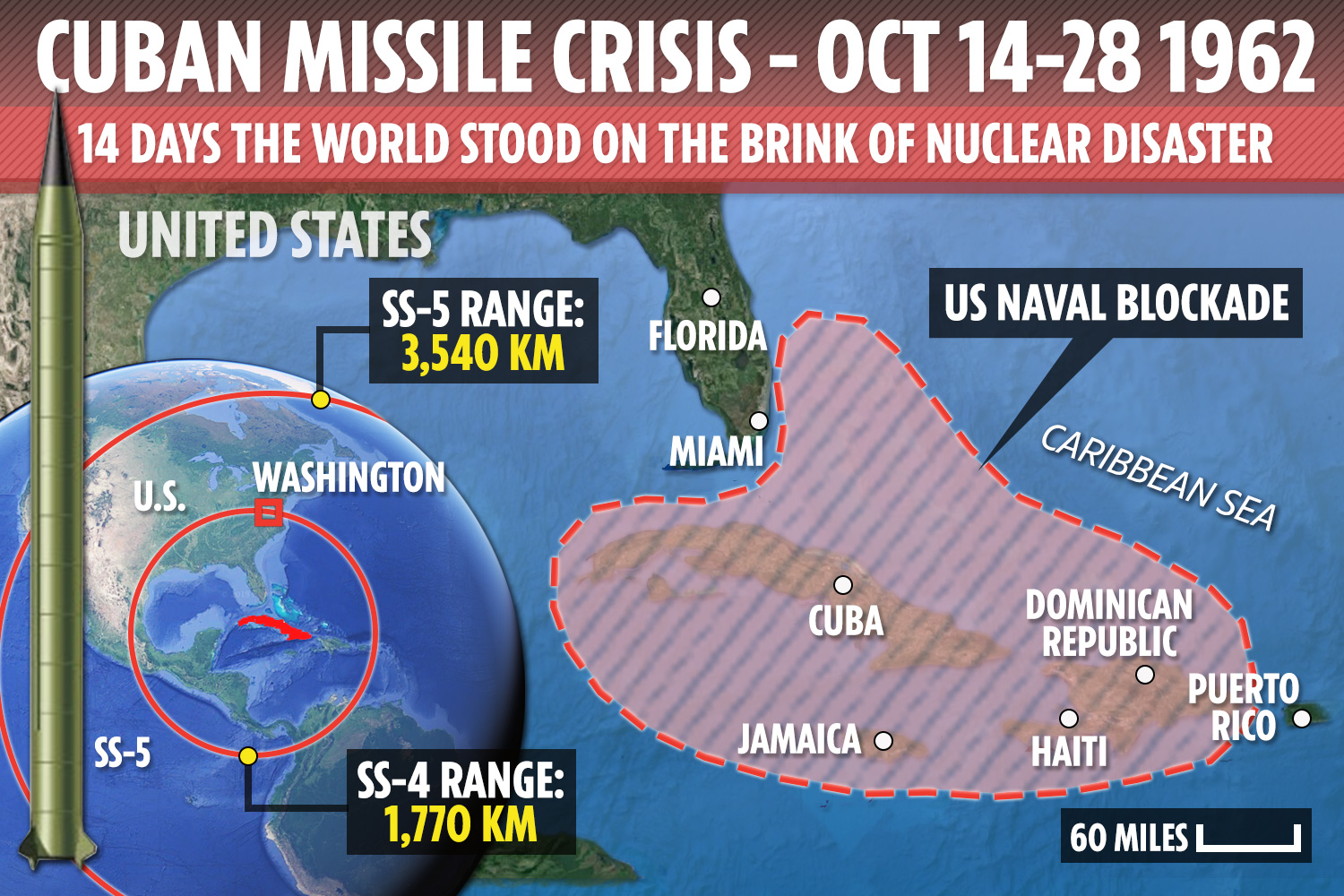 The Cuban missile crisis erupted in 1962 when the Soviet Union responded to a US missile deployment in Turkey by sending ballistic missiles to Cuba – just miles from the US coastline.

It sparked a tense two-week standoff that brought the world to the brink of nuclear war.

The crisis was defused when Soviet ships headed for Cuba turned back in the face of a US naval blockade.

Eventually, the Soviet Union agreed to remove its missiles from Cuba in return for the US promising not to invade Cuba.

Washington secretly said it would remove the US missiles from Turkey to avoid a repeat of the near-catastrophe.

Mr Ryabkov said yesterday: “If things get as far as an actual deployment on the ground of these sorts of systems, then the situation won’t just get more complicated, it will escalate right to the limit.

“We could find ourselves in a situation where we have a rocket crisis close not just to the crisis of the 1980s but close to the Caribbean crisis” – the Russian term for the 1962 Cuban standoff.

Earlier that month, the United States said it would withdraw from the Intermediate-range Nuclear Forces Treaty with Russia in six months.

It would do so unless Moscow ended violations of the landmark 1987 arms control pact – although Russia denies any violations.

The warning came as one of the Russian navy’s most advanced warships entered Havana’s harbour on Monday.

It docked at the port used until this month by US cruise lines – with tourists seen taking photos of the imposing vessel.

The Admiral Gorshkov – which entered service last year – is armed with cruise missiles, air defence systems and other weapons.

The frigate is based at the Arctic port of Severomorsk and is part of Russia’s Northern Fleet.

Explained: What was the Cuban missile crisis?

IN 1962, leaders of the US and Soviet Union engaged in a tense, 13-day political and military standoff over the installation of nuclear-armed Soviet missiles on Cuba.

In a famous TV address, President John Kennedy notified Americans about the presence of the nukes and explained his decision to set up a naval blockade around the island.

He made it clear the US was ready to use force to neutralise the threat to its national security. Following the news, many feared the world was on the brink of nuclear armageddon.

However, disaster was avoided when the US accepted Soviet leader Nikita Khrushchev’s offer to remove the missiles in exchange for the US promising not to invade Cuba.

Kennedy also secretly agreed to remove US missiles from Turkey.

It’s the first ship in a new class of frigates intended to replace aging Soviet-era destroyers to project power far away from Russian shores.

The ship is accompanied by the logistics vessel Elbrus, the medium sea tanker Kama and the rescue tug Nikolai Chiker, the Russian navy said.

Read More:Pushing An Agenda? US Readies For War After ‘Iran Shoots Down US Military Drone’ – However Photo Press Uses Is From Years Ago

Read More:Not Good For The US: Russia And China Will Now Use Gold For International Currency