NXIVM “cult” leader Keith Raniere, who branded women with his initials and treated them as his“sex slaves” was found guilty of sex trafficking, racketeering and conspiracy by a Brooklyn jury Wednesday.

It took only four hours of deliberations for a jury of eight men and four women to convict the longtime leader and figurehead of the upstate self-help group, ending a twisted, sordid odyssey of sex, blackmail and betrayal.

As the verdict was read, Raniere, 58, who was called “Vanguard” by his brainwashed followers, appeared stoic, whispering to his lawyer while several NXIVM defectors cried and trembled.

Raniere was accused of helping himself to a harem of women who were recruited for his sexual pleasure into a secret sect called “DOS.” He had pleaded not guilty, and said that his encounters with the victims, some of whom were branded with his initials, were consensual.

Prosecutors said his entire purpose for starting the cult, a secret sub-group under the NXIVM umbrella, was to feed himself an endless supply of sexual partners.

The NXIVM community, centered in Albany and focused on its self-help teachings, treated him as a god-like figure, even celebrating “Vanguard week” or “V-week” annually in August, a week-long Lake George retreat devoted to Raniere’s birthday.

Raniere made sure to collect nude photos and other embarrassing information from victims to use as blackmail in case they ever wanted to leave.

The prosecutor called out Raniere and his top deputies for using over a 15-year period “tactics that destroyed their victims’ sense of self,” including turning “victims into victimizers.”

NXIVM deputies including “Smallville” actress Allison Mack, a Raniere slave herself, and Clare Bronfman, an heiress to the Seagram’s liquor fortune, were also charged and previously pleaded guilty.

Jurors heard evidence that Bronfman bankrolled Raniere’s businesses and care-free lifestyle while Mack recruited her own slaves and ordered them to have sex with Raniere.

Witnesses included Daniela, 33, a former NXIVM devotee who was confined to one room from 2010 to 2012. According to prosecutors, she became Raniere’s sex slave, forced to “sexually perform on the defendant’s demand,” and ultimately spy on his enemies, including her older sister, who was in Raniere’s harem. Her older sister was also in a relationship with Raniere.

Meanwhile, their younger sister was groomed to start sleeping with Raniere at age 15, and he was busted with explicit photos of the girl he took at that time, when he also took her virginity.

One woman who testified said she was tied to a table, blindfolded, and subjected to unwanted oral sex by another “slave,” as Raniere observed and videotaped.

Raniere’s lawyer Marc Agnifilo had argued that Raniere’s abhorrent lifestyle and comments were not criminal.

“He didn’t mean to hurt anyone,” Agnifilo said.

Jurors decided Raniere’s misdeeds did amount to a conspiracy and that he was responsible for forced labor, exploitation of a child, possession of child pornography, identity theft and other crimes.

Raniere was busted in 2018 while hiding out in a secluded village in Mexico. 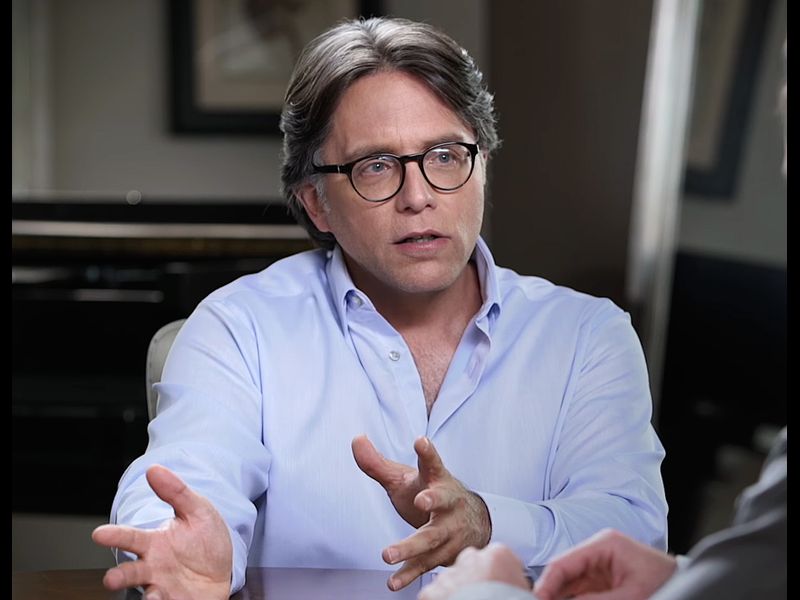 Among those who followed his seven-week trial were former NXIVM member India Oxenberg and her mother, actress Catherine Oxenberg. The former “Dynasty” star has written a book about her effort to save her daughter from the group.

The trembling Catherine Oxenberg, wearing aviator sunglasses and a white jacket, wept and clutched supporters in the back row of the courtroom as the verdict was announced.

“They saved my daughter,” the overwhelmed mom said. “They saved so many other women.”

As she got onto an elevator, Oxenberg said that Raniere “can’t fool one singer person ever again” and that “he’s done.”

Oxenberg, who called her daughter outside the courthouse to deliver their good news, said India “is doing amazing considering what she went through.”

Toni Natalie, a former girlfriend of Raniere’s more than two decades ago, remained an “enemy” of his until his arrest last year.

He sued her, harassed her and accused her of bogus crimes. She has been trying to get him held accountable for his prolific scamming and swindling for years.

“He can’t hide anymore,” an emotional Natalie said. “He can’t con anymore. His days of deception are over.”

Raniere faces up to life in prison when he is sentenced on Sept. 25.

“Over the last seven weeks, this trial has revealed that Raniere, who portrayed himself as a savant and a genius, was in fact, a master manipulator, a con man and the crime boss of a cult-like organization involved in sex trafficking, child pornography, extortion, compelled abortions, branding, degradation and humiliation,” Donoghue said.

Read More:Seagram’s Heiress Clare Bronfman (Among Others) Arrested On Charges For Sex Trafficking And Involvement In A Sex Cult