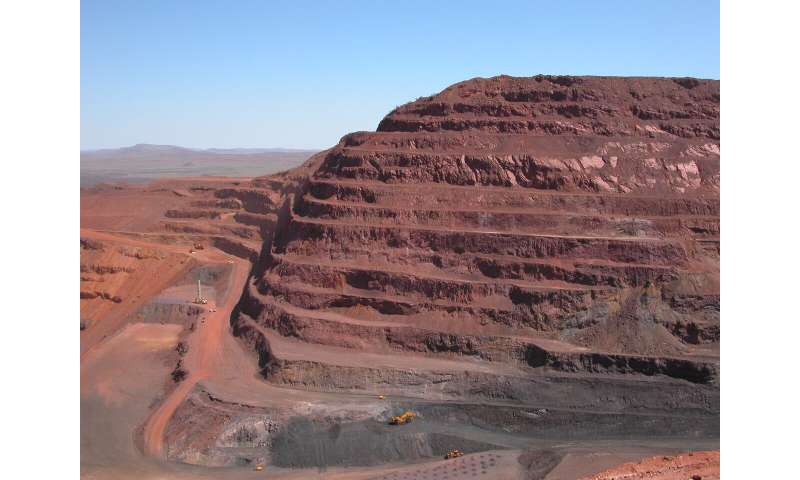 A new study by University of Alberta scientists shows that banded iron formations originated from oxidized iron, confirming the relevance and accuracy of existing models—a finding of great importance to the geological community.

Banded iron formations are a distinct type of sedimentary rock with layers of iron deposited as horizontal bands. The majority of these formations formed over the last 2.5 billion years and are a major source of iron today. “We’ve been using banded iron formations with great success to track the evolution of seawater chemistry and evolution of the biosphere,” explained Kurt Konhauser, professor in the Department of Earth and Atmospheric Sciences and co-author on the paper. “But these experiments are based on the assumption that we understand the primary minerals that compose these rocks.”

In the last decade, a new model was proposed, suggesting that the formations began as ferrous iron that was later oxidized by oxygen in the environment—a model that, if correct, would require a major paradigm shift in this area of study.

To examine this possibility, a group of researchers led by Konhauser’s Ph.D. student Leslie Robbins tested the theory using a hydrogeological model, designed to determine how long it would take oxygen to oxidize such a formation. The research team included Professor Ben Roston, Assistant Professor Daniel Alessi, and Professor Larry Heaman.

“Essentially, we found that this would be possible in only one per cent of cases in the suggested time frame of 250 million years,” said Konhauser. “Moreover, we had to create unrealistic conditions in order to make the new proposed model work—for instance, an extremely steep slope, or rock that was actually sand, or a great deal of oxygen.”

These results confirmed that the newly proposed model is inaccurate, indicating that existing models and our current understanding remains the most effective method of studying banded iron formations.

“This is a powerful result that stems from the simple question about whether recently proposed models for banded iron formations are plausible when extrapolated to the size of a depositional basin,” said Robbins, now a postdoctoral fellow at Yale University in New Haven, United States. “This result has fundamental implications for the formation of these deposits, and this work benefited greatly from strong collaborations both within Earth and Atmospheric Sciences and with our external collaborators.”