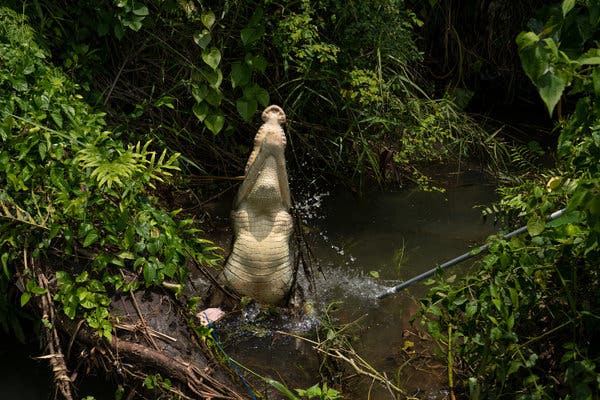 LOSPALOS, East Timor — The two scientists, crammed in the back of a sweltering car, had come a long way hoping to encounter what most people try to avoid: man-eating crocodiles.

Yusuke Fukuda and Sam Banks, biologists from Australia, traveled in March to East Timor, one of the world’s least developed countries, to investigate what has become a deadly national mystery: Why are so many Timorese being killed by crocodiles?

Crocodile attacks here have increased 20-fold in the past decade, numbering at least one death a month in a country of 1.2 million people.

“We became concerned after many people were taken by crocodiles in East Timor,” said Mr. Fukuda, a Ph.D. candidate at Australian National University in Darwin, adding that it had taken years of bureaucratic wrangling between the researchers and the governments in both Australia and East Timor to be permitted to conduct research.

The people of East Timor, also know as Timor-Leste, have for centuries revered and even worshiped crocodiles.

The country’s origin myth is about the crocodile Lafaek Diak, who out of friendship for a human boy sacrificed itself to become the child’s home — the island of Timor, with each scaly bump on its back turning into a mountain.

Timorese call crocodiles “abo,” the Tetum-language word for grandparent, and killing them is culturally taboo as well as illegal.

The animals are so admired here that victims of attacks are often too ashamed to report them, which is why many believe the actual number of attacks is higher than the official statistics suggests.

The Timorese most at risk from crocodiles are those living on the banks of the countless riverways of this island, or along its coast. Using the rivers — whether to collect water, fish for food, bathe or do laundry — is a part of their daily life.

A sign in the Tetum language warns of the risk of crocodiles.CreditMatthew Abbott for The New York Times 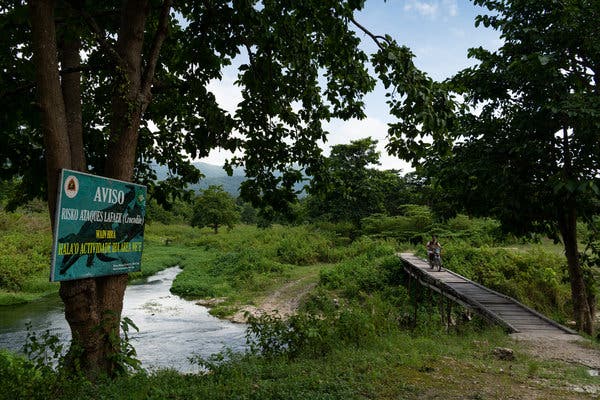 Locals frequently use rivers to collect water, do laundry and bathe, which puts them at risk of attack.CreditMatthew Abbott for The New York Times 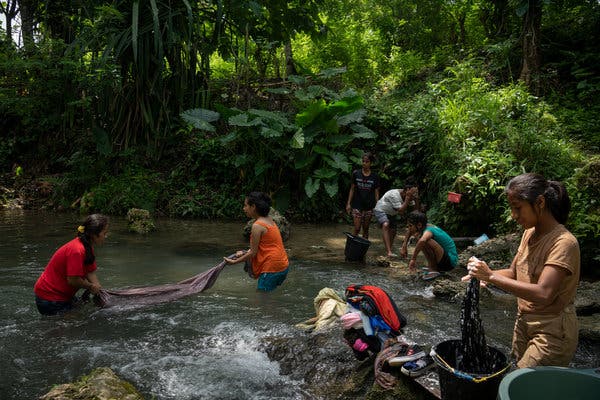 A crocodile features in a Catholic shrine on the outskirts of Lospalos.CreditMatthew Abbott for The New York Times 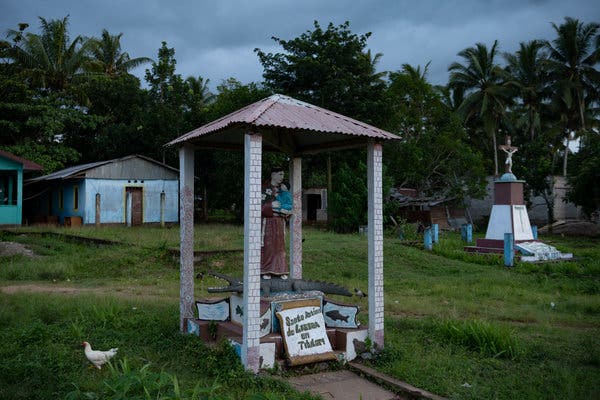 Researchers have found that nearly 83 percent of those attacked in East Timor in the past 11 years were subsistence fishing, using small canoes or wading in the water.

Many locals do not believe that native crocodiles are behind the increase in attacks; they blame migrants, or murderous “troublemakers,” who they say play by a different set of rules than the local “grandfathers.”

Demetrio Carvalho, East Timor’s secretary of state, summed up the theory. “The people believe that these crocs are our ancestors, and ancestors don’t go attacking people,” he said. “Our grandparents don’t kill us.”

Enter the Australian researchers. After a bumpy eight-hour journey along the roads of East Timor’s northern coast, the men arrived in the isolated town of Lospalos, home to some of the biggest and most dangerous crocodiles in the country.

Their goal was to test the locals’ theory by trying to determine whether the killer crocs were saltwater crocodiles from Australia, one of that country’s most feared and dangerous animals.

After poaching was banned in Australia in the 1970s, saltwater crocodile populations exploded. The animals have recently been found in areas that were previously considered unsuitable or too remote.

East Timor is about 280 miles from the animals’ regular range in northern Australia, a lengthy but manageable swim for a powerful animal that can grow up to 20 feet long and weigh more than 2,000 pounds.

“After several days swimming, these crocs would be very hungry and dangerous to come across,” said Mr. Fukuda, the researcher.

The researcher Yusuke Fukuda, center, inspecting a DNA sample taken by Victorino De Araujo, right, in gray shirt, a local who works as a firefighter but is known in town as the person to call when there has been a crocodile attack .CreditMatthew Abbott for The New York Times 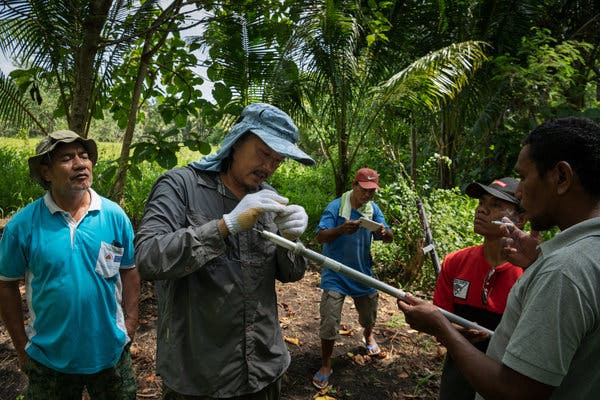 To extract DNA, the researchers must penetrate a croc’s leathery hide using a needle attached to a 12-foot long aluminum rod, which is known as a biopsy pole.CreditMatthew Abbott for The New York Times 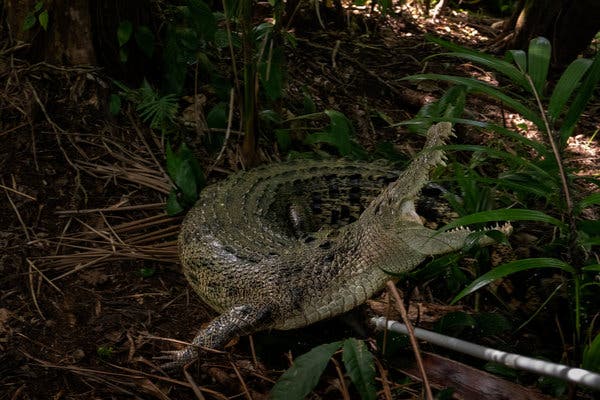 Mr. De Araujo collecting a DNA sample from a crocodile just beneath the surface of the water.CreditMatthew Abbott for The New York Times 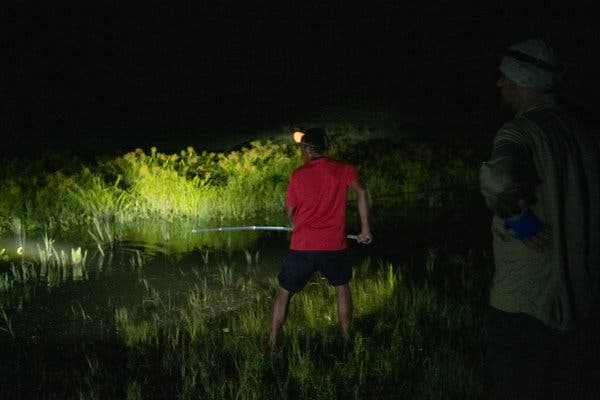 To test the migration theory, Mr. Fukuda and Professor Banks planned to collect DNA samples from a number of crocodiles.

But taking a DNA sample from a crocodile is a far riskier proposition than your typical home heredity kit.

For obvious reasons, swabbing the inside of a crocodile’s cheek is not an option. Instead, the scientists must penetrate a croc’s leathery hide using a needle attached to a 12-foot long aluminum rod, which is known as a biopsy pole.

To do that successfully often requires wading into the water — at night.

To help find and stick the crocodiles, the researchers enlisted the help of several locals, including Vitorino De Araujo.

Mr. De Araujo, 37, works as a firefighter, but is known in town as the person to call when there has been a crocodile attack or if a member of the community has disappeared near the water. He will enter the swamp and retrieve what is left of a body.

He is seen as a spiritual leader in the community with an almost supernatural relationship to the animals: a crocodile whisperer.

As the sun set on the first night the scientists arrived in Lospalos, the team headed into the swamp.

Through the darkness, they spotted two glistening dots reflecting the light of their headlamps and floating just above the surface of the water — crocodile eyes. Based on the distance between the croc’s eyes, Professor Banks estimated its total length: 12 feet, a big one.

A bus in Lospalos depicts East Timor’s national creation myth about a crocodile who befriends a human boy.CreditMatthew Abbott for The New York Times 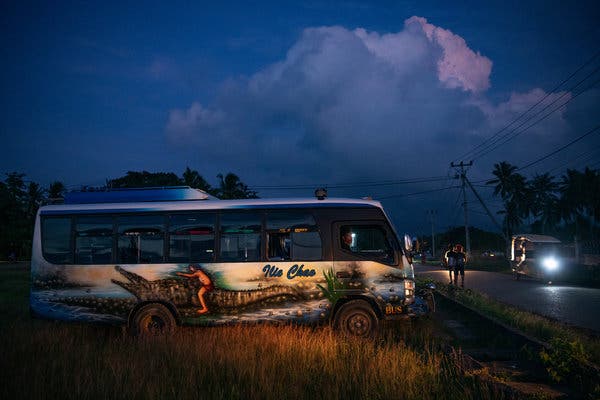 A police officer encouraging a boy to shake the foot of a captive crocodile.CreditMatthew Abbott for The New York Times 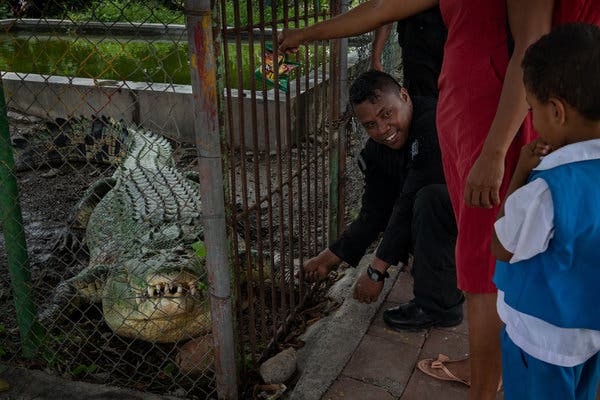 Mr. De Araujo grabbed the biopsy pole, and took off, bare foot into the dark swamp. After minutes of silence, he lunged at something and let out a shriek. He had landed his first jab.

Moments later, he waded out of the water to show the group his result. The needle was bent, but contained a tiny, three-millimeter sample.

For the next six days, the team searched for animals to test. They lanced wild crocodiles, but also retrieved samples from crocs that were being held as pets, mascots or lucky charms. They ended up with 17 good samples.

Mr. Fukuda planned to take the samples back to Australia for testing but he first had to get back on Timor’s ragged coastal roads and head to Dili, the capital.

He was halfway there, when his driver stopped for a crowd gathered by the edge of the ocean.

A police officer beckoned the scientist to show him a set of items that had washed up on the beach — goggles, a spear gun and a torn pair of swim trunks.

They belonged to Agostinu da Cunya, a 17-year-old who went spearfishing the evening before with his brother while their father waited for them on the shore.

The boy, his family said, had been attacked by a crocodile. He was never seen again.