Facebook is considering building ’emotionally sensitive’ robots that can explore the world, identify objects and people and enable users to make friends remotely.

On-board sensors would allow the robots to spot people to engage with, judge their emotional state and listen to what they are saying, a patent filing revealed.

However, it is not known whether Facebook will follow through on the patent filing and make the rough robot designs a reality. 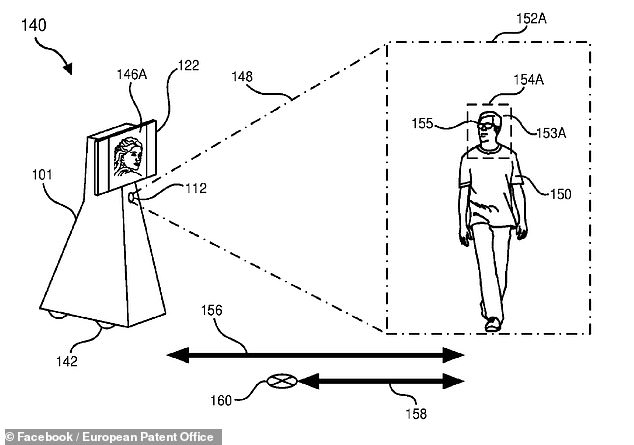 Facebook is considering building ’emotionally sensitive’ robots (pictured, in this rough sketch from the patent that the social media firm filed) that can explore the world, identify objects and people and enable users to make friends remotely

According to their patent, Facebook are considering building social robots with the following features:

A screen to display images — such as, perhaps, a livestream of the user.

Microphones to listen for sounds and to hear speech, as well as speakers to allow the robot, or its user, to talk.

Wheels or treads to move around on.

The concept for the social robots was outlined in a European patent filed by the social media firm on May 16, 2019.

Each machine, about the height of an adult, would be equipped with cameras and other sensors.

These would let them scan and interpret the faces and body language of people they encounter to assess their ‘likely emotional state’.

Speakers and microphones would listen out for ‘sounds emitted’, allowing the robots to talk to people or pick out the sound of someone calling to them.

If integrated into Facebook’s social media platform, members could potentially used such robots as proxies for real-world exploration and interactions with people.

The robot could display images to the people it encounters using the monitor screen placed on its top.

The screen might be used to present static pictures, or perhaps a live video feed of the user’s face, much like a telepresence bot.

The design proposal suggests that the robots would be able to perform various tasks, either autonomously or controlled remotely from another device.

For example, on-board GPS systems could help the robot to pinpoint its location, while its sensors could help them identify, navigate to and take photos of objects or people of interest.

The robot’s screen might be used to present static pictures, or perhaps a live video feed of the user’s face, much like a telepresence bot (pictured, stock image)

The robots would be fitted with wheels or tank-like caterpillar treads that would allow them to trundle about their environment.

Alternatively, such robots could be fitted out with drive systems that would allow them to move around underwater, fly through the air or float in space, Facebook suggest in their patent.

Facebook has not many any official announcement regarding any plans for such a social robot design.

Facebook says that the patent is not necessarily ‘an indication of future plans’.

As with any company that files a patent, there is no guarantee that Facebook will ever move to actually build technology based on the concept.

However, Facebook is known to already be working in collaboration with New York University on artificial intelligence powered robotic systems.