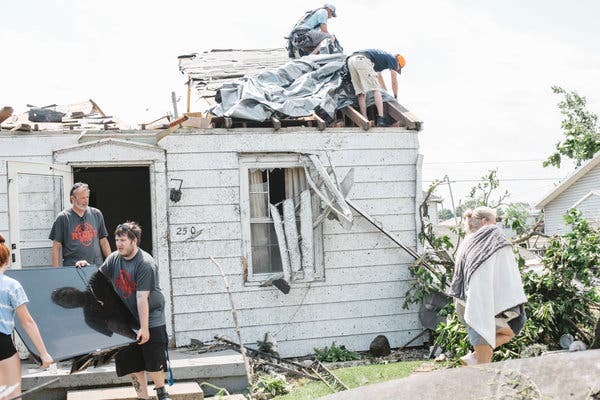 CELINA, Ohio — The tornado screeching across southern Ohio on Monday night triggered a cellphone alert that roused Rich Schlarman. He ignored it. Then came another. That was enough to persuade him to hurry his 83-year-old mother toward the basement.

“We only made it down about four steps when I heard a loud boom,” Mr. Schlarman said. “If we hadn’t made it down as far as we had, we would probably not have made it.”

On Tuesday, his home was a shambles: walls bent, doors tilted, the roof gone — another house crippled amid a stretch of severe weather that has tormented communities from the Rocky Mountains to the Mid-Atlantic in recent weeks.

Now the severe weather had come to Celina, a city of about 10,000 people about 60 miles northwest of Dayton, causing the kind of devastation that has left state after state with ruined buildings and grieving families this spring.

In the last week alone, the authorities have linked tornadoes to at least seven deaths and scores of injuries. Federal government weather forecasters logged preliminary reports of more than 500 tornadoes in a 30-day period — a rare figure, if the reports are ultimately verified — after the start of the year proved mercifully quiet.

The barrage continued Tuesday night, as people across the Midwest took shelter from powerful storms.

A particularly destructive storm splintered homes, ripped up trees and downed power lines southwest of Kansas City. One tornado hit the outskirts of Lawrence, Kan., home to the University of Kansas. The worst damage was reported in nearby Linwood. Twelve people were taken to Lawrence Memorial Hospital with injuries, including broken bones and lacerations from glass, a hospital spokeswoman said. One person was in surgery and was to be kept there overnight.

On the East Coast, tornado and severe thunderstorm warnings were issued in parts of northern New Jersey and on Staten Island in New York.

The house of Mark and Dena Duffin in Linwood, Kan., was severely damaged by a tornado that hit the area on Tuesday.CreditChristopher Smith for The New York Times

“From mid-April on, it’s just been on a tear,” said Patrick Marsh, the warning coordination meteorologist at the National Weather Service’s Storm Prediction Center in Norman, Okla. “What has really set us apart has been the last 10 days or so. The last 10 days took us from about normal to well above normal.”

[Read more on the tornadoes that ripped through Ohio, killing at least 1.]

Tuesday was the 12th consecutive day with at least eight tornado reports, breaking the record, according to Dr. Marsh. The storms have drawn their fuel from two sources: a high-pressure area that pulled the Gulf of Mexico’s warm, moist air into the central United States, where it combined with the effects of a trough trapped over the Rockies, which included strong winds.

“We are flirting in uncharted territory,” Dr. Marsh said of the sustained period of severe weather. “Typically, you’d see a break of a day or two in between these long stretches, but we’re just not getting that right now.”

Dena Duffin and her daughter, McKenzie Baker, searched through belongings in their house in Linwood, Kan., on Tuesday night.CreditChristopher Smith for The New York Times

Forecasters said that even the briefest of reprieves might not come until late this week, and another round of severe weather erupted on Tuesday afternoon.

Climate change is increasingly linked to extreme weather, but limited historical information, especially when compared with temperature data that goes back more than a century, has made it difficult for researchers to determine whether rising temperatures are making tornadoes more common and severe.

Kerry A. Emanuel, a professor of atmospheric science at the Massachusetts Institute of Technology who specializes in hurricanes, noted that the science of the connection between tornadoes and climate change is simply less comprehensive than what researchers have compiled on tropical cyclones.

A home south of Lawrence, Kan., after it was hit by a tornado on Tuesday.CreditChris Neal/The Topeka Capital-Journal, via Associated Press

Dealing with tornadoes and climate change, he said, is “absolutely complicated,” and there are relatively few papers that discuss tornadoes and climate because “it’s almost impossible to see any signal in the data.” What’s more, he said, the data of the current generation of radar technology goes back to only about 1990, a shorter period than that for good hurricane data.

But researchers have found that tornadoes are increasingly clustered in short periods of time.

In Ohio on Tuesday, residents and emergency officials were responding to the destruction that happened overnight, when radars glowed with the telltale signatures of violent storms. The worst of the weather unfolded just before midnight in and around Dayton, where the authorities reported “significant” damage and trouble with the local water system.

The federal government said Tuesday that its initial reports showed at least 10 tornado touchdowns across six counties, which were left to contend with spotty phone service, blocked streets, boil-water advisories and sporadic evacuations.

Alicia Conley looked out the window of her home, which sustained major damage as multiple tornadoes touched down in the Dayton, Ohio, area.CreditAndrew Spear for The New York Times

Tens of thousands of customers spent at least some of Tuesday without electricity as emergency workers went door-to-door in some communities in search of victims. Ohio Task Force One, an elite search-and-rescue team, was assigned to work in part of Montgomery County.

[Read more on the tornado that left an Oklahoma town “shaken.”]

Mike Robbins, the emergency management director for Mercer County, said an 81-year-old man had died in Celina when the storm picked up a vehicle and slammed it into his home. He said that at least seven people had been injured, three of them seriously, and that at least 40 homes had been destroyed or seriously damaged by the storm, which the Weather Service rated as at least an EF3 tornado, with winds of 136 miles per hour or higher.

But emergency officials said the low death toll was most likely a result of robust warnings that gave people time to seek shelter.

Tornado damage in Dayton on Tuesday. Forecasters have logged preliminary reports of more than 500 tornadoes in a 30-day period — a rare figure, if the reports are ultimately verified.CreditAndrew Spear for The New York Times 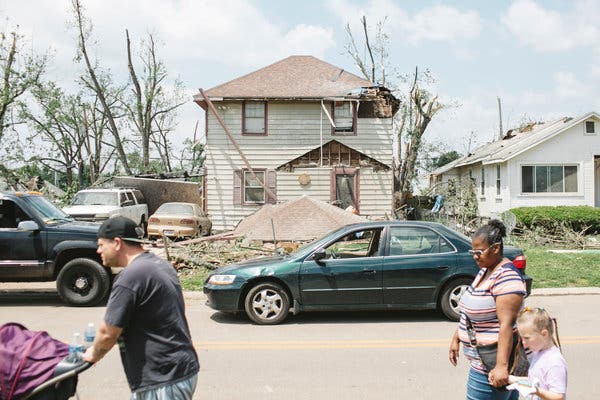 After sunrise on Tuesday, Tammy King, 51, sat on what remained of her front porch in Dayton, smoking a cigarette and salvaging what she could on her property, where metal had twisted around a tree. Her living room was essentially gone, and across the street, a Frito-Lay distribution center was destroyed.

“We got two alerts on our phones; after the second alert, I went to my basement,” she said. “As soon as I got there, I heard the wind. It sounded like a freight train — the horn of a freight train blowing. If we had not gotten to the basement, we would be gone. The cellphone alerts saved our lives.”

Others also received alerts but were only prodded to safety when they heard the fury that was unfolding outdoors.

“I was watching the news and was taking the news of a tornado with a grain of salt until I heard the wind — and my back door slamming open and shut,” Eddie Whitehead said on Tuesday as he waited for an insurance adjuster in Dayton. “Today I’m sitting here in awe.”

The windows of his home were blown out, and mangled metal rested in his front yard.

Yet he was among the Dayton area’s faintly fortunate: His house still stood, sandwiched between two that no longer did.

Dire warnings and frantic rushes to safety have taken place across the country in recent weeks, and the nation’s tornado death toll has reached its highest level since 2014. So far this year, tornadoes have been blamed for at least 38 deaths in the United States, including this week’s fatality in Celina. (Most of this year’s tornado deaths were in Beauregard, Ala., where 23 people were killed in early March, but at least eight states have reported tornado fatalities since Jan. 1.)

Forecasters noted that the bursts of severe weather have followed years of relative calm, at least when it came to tornadoes, after the 2011 storm season when hundreds of people were killed.

“We’ve had a very quiet few years,” Dr. Marsh said on Tuesday morning. “And when we go back to something closer to normal — even though it’s slightly above right now — it just seems so much worse than what we’d expect because our expectations are biased by the recent past.”

Read More:What Is Causing Extremely Bizzare Weather Pattern That Is Hammering The Midwest Again And Again?