A large earthquake with a preliminary magnitude of 8.0 struck north-central Peru early Sunday, the U.S. Geological survey reported. The quake, at a moderate depth of 71 miles struck at 12:41 a.m. PDT, 50 miles southeast of the village of Lagunas and 98 miles east-northeast of the larger town of Yurimaguas.

A powerful 8.0-earthquake struck northern Peru in the early hours of Sunday, sending frightened residents rushing into the streets.

Some injuries but no deaths have been reported. The force of the quake, however, brought down many old houses in Yurimaguas, a town near the epicenter in a lightly populated area of Peru’s Amazon basin, the town’s mayor Hugo Araujo said.

Roads were blocked and a bridge was damaged, according to a preliminary assessment cited by Peru’s President Martin Vizcarra. “It is an earthquake affecting the entire Peruvian jungle,” he said, describing it as the most powerful quake to hit Peru in 12 years. “We are coordinating to establish an air bridge to transport people who have an emergency,” he said.

The quake hit at 0741 GMT about 75 kilometers southeast of the town of Lagunas and toward the border with Brazil, at a depth of at least 110 kilometers.

The US Geological Survey said the quake registered 8.0 in magnitude. The Institute of Geophysics of Peru, which uses a different scale, measured it at 7.5 on the Richter scale and said it lasted just over two minutes. 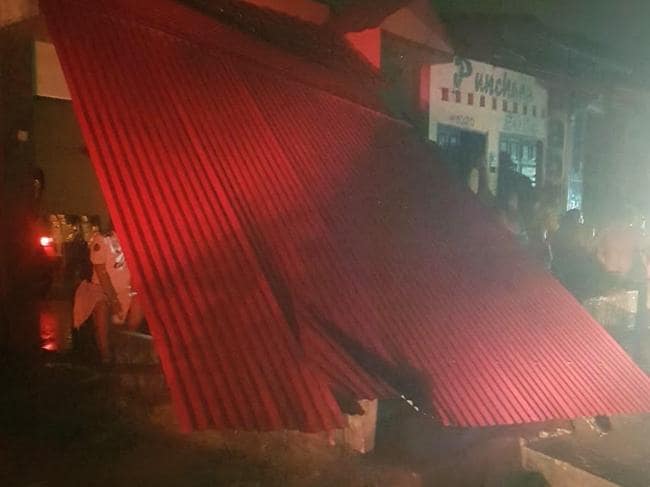 The tremors were felt in northern and central Peru, including the capital Lima, where terrified residents ran out of their homes.

The mayor of Lagunas, Arri Pezo, said many residents were too scared to venture back indoors for fear of aftershocks.

“You could not walk at the time of the earthquake, things were falling,” Pezo told the RPP radio network, adding that it was difficult to determine the extent of damage because the electricity supply had been knocked out.

Araujo, the mayor of Yurimaguas, said, “there are many old houses that have collapsed after this strong earthquake.” The USGS said the impact “should be relatively localised.

Quakes of similar depth “typically cause less damage on the ground surface (but)… may be felt at great distance from their epicenters,” it later added.

The USGS put the depth at 110 kilometers, while the Institute of Geophysics of Peru said it was 141 kilometers deep. 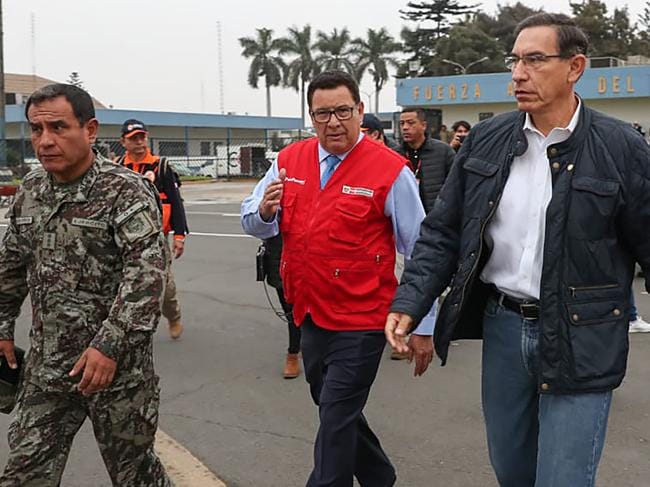 Peruvian President Martin Vizcarra (R) walking to board a flight from Lima to Yurimaguas to inspect the Amazonic area after a strong 8.0-earthquake. Picture: AFP

Experts at the US-based Pacific Tsunami Warning Center said there was “no tsunami threat because the earthquake is located too deep inside the earth.”

The shockwave of Sunday’s tremor also extended to neighbouring Ecuador, where power cuts were reported in parts of the Amazon region.

“We have carried out the respective monitoring in each city to collect information and report damage after the earthquake; so far we have no news,” wrote Ecuadoran Vice President Otto Sonnenholzner on his Twitter account.

The president of Ecuador, Lenin Moreno, who is in Lima to attend a regional summit later on Sunday, tweeted that the town of Yantzaza had experienced power cuts, adding that officials would provide more information about the quake’s impact as it became available.

Peruvian media said the tremor was also felt in parts of Colombia and Venezuela.

Peru lies on the so-called Ring of Fire – an arc of fault lines that circles the Pacific Basin and is prone to frequent earthquakes and volcanic eruptions. The South American country records about 200 earthquakes a year, most of them going unnoticed by the public. In February a quake measuring 7.5 with its epicenter in Ecuador rattled the coast and Amazon region of northern Peru. It left nine people injured and caused damage in Ecuador, but Peru was unscathed.