The Plain of Jars in the Xieng Khouang plain of Laos is a curious phenomenon that has had archaeologists and the like scratching their heads for years. The unusual site has thousands of megalithic stone jars scattered across nearly one hundred sites deep in the mountains of northern Laos, and has fascinated archaeologists and scientists ever since their discovery in the 1930s.

Now, according to an Australian National University (ANU) press release , more mysterious jars of the dead have been found. ANU archaeologists have reported 15 new sites containing 137 new examples of the more than 1500-year-old massive jars. The new sites are showing that the distribution of the jars is wider than previously thought.

The Plain of Jars

The unusual site known as the Plain of Jars is dated to the Iron Age (500 BC to 500 AD) and is made up of at least 3,000 giant stone jars up to 3 meters tall and weighing several tons. Most are made of sandstone but there are others made of much harder granite and limestone.

Because the jars have lip rims, it is presumed that all of them were originally covered with lids and although a few stone lids have been recorded, it is more likely that the main material used was wood or ratan. 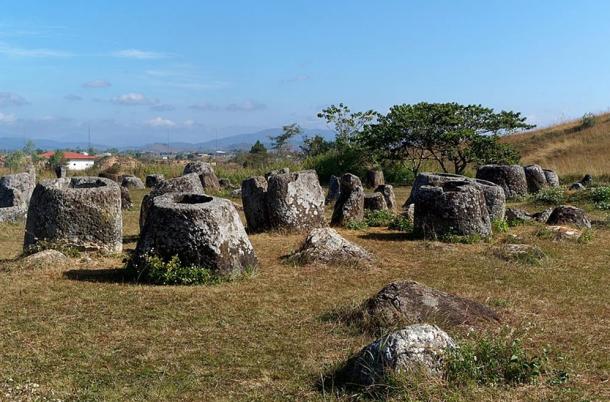 The jars appear to have been manufactured with a degree of knowledge of what materials and techniques were suitable. It is assumed that Plain of Jars’ people used iron chisels to manufacture them, although no conclusive evidence for this exists. Little is known of the people who carved the huge containers and the jars themselves give little clue as to their origins or purpose.

ANU PhD student, Nicholas Skopal, who was part of the team you found the new sites, explained how isolated they are:

These new sites have really only been visited by the occasional tiger hunter. Now we’ve rediscovered them, we’re hoping to build a clear picture about this culture and how it disposed of its dead.

He also indicates one of the main beliefs held by experts regarding the purpose of these many jars – that they are somehow related to the disposal of the culture’s dead.

ANU archaeologist Dr Dougald O’Reilly who co-led the team that made the discovery explained:

It’s apparent the jars, some weighing several tonnes, were carved in quarries, and somehow transported, often several kilometers to their present locations. But why these sites were chosen as the final resting place for the jars is still a mystery. On top of that we’ve got no evidence of occupation in this region.

That said, some of the same team working with a project entitled Unravelling the Mysteries of the Plain of Jars , found interesting new evidence at the vast site in 2016, when human remains dating to the Iron Age, between 2500-3000 years ago, were unearthed. They found evidence of at least 3 types of burial practices in the region.

This year’s excavations have made further breakthroughs, with the uncovering of carved discs which were placed around the jars and could be markers for burials. Interestingly, the decorated side of the discs were facing downwards and included such imagery as “concentric circles, pommels, human figures and creatures,” said Dr O’Reilly. Why some discs have geometric patterns and others representative images remains a mystery, but this is not deemed the most perplexing of the recent finds.

“Curiously we also found many miniature jars, which look just like the giant jars themselves but made of clay, so we’d love to know why these people represented the same jars in which they placed their dead, in miniature to be buried with their dead,” Dr O’Reilly said. 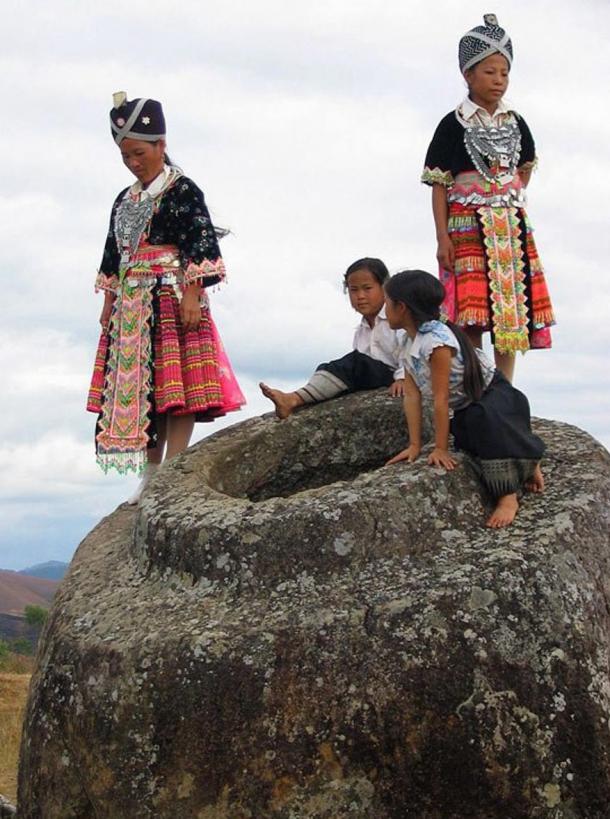 Legends of the Plain of Jars

Local folklore has its own explanations for the jars. According to a previous Ancient Origins article by April Holloway, legend has it that the jars:

“were created by a race of giants , whose king needed somewhere to store his rice wine. The wine was to be consumed at a great feast to celebrate an illustrious military victory thousands of years ago. Legend also tells of an evil king, named Chao Angka, who oppressed his people so terribly that they appealed to a good king to the north, named Khun Jeuam, to liberate them. Khun Jeuam and his army came, and after waging a great battle on the plain, defeated Chao Angka.”

There are more worldly explanations offered. Some have maintained that the giant jars were used to collect the monsoon rainwater. But most archaeologists believe that the jars were used as funerary urns and this is supported with the discovery of human remains , burial goods and ceramics around the stone jars.

It is believed that the jars were used to place the corpses of deceased people where they were left to decompose or ‘distill’, a practice that has been common in Thailand and Laos, usually in pits.  It is believed that the bodies were left in the jars for the soft tissue to decompose and the body to dry out before being cremated. Once they had been cremated, the ashes would have been returned to the urns, or perhaps buried in a sacred place, freeing the jars for re-use to decompose another body.

The archaeologists are still working on finding all the answers but their work is hindered by the fact that the Plain of Jars is one of the most dangerous archaeological sites in the world. Scattered over the plains are literally thousands of tonnes of unexploded bombs, land mines and other unexploded military ordnance, which contaminate more than 35% of the province’s total land area  and continue to threaten the lives of the 200,000 people who now live in Xieng Khouang.

Read More:There Were Giants In Those Days, Also After: Who Was The ‘Glastonbury Giant’?

Watch More:Giants And The Smithsonian

Watch More:As In The Days Of Noah: The Ancient Giants Were NOT A Myth