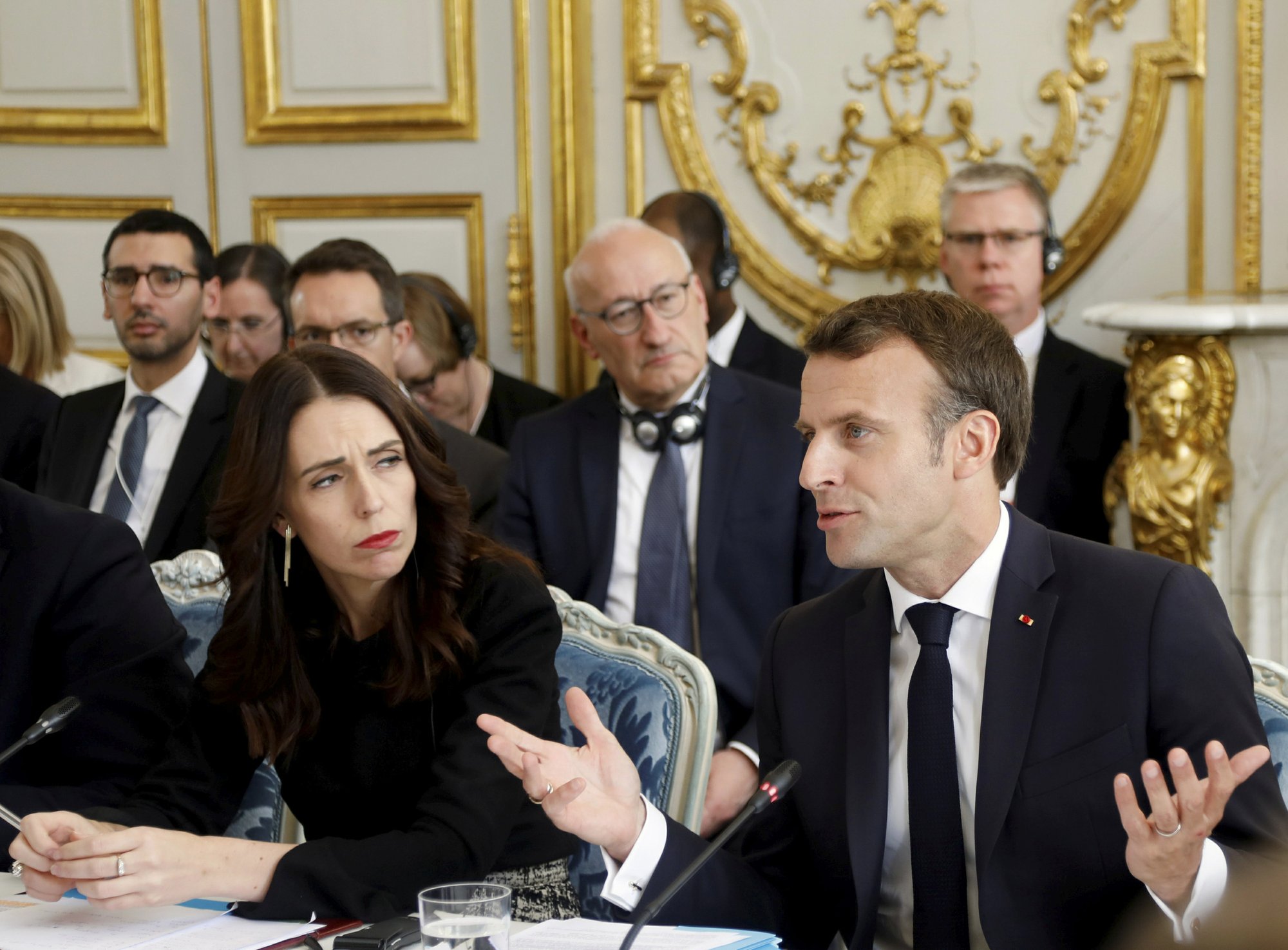 French President Emmanuel Macron and New Zealand’s Prime Minister Jacinda Ardern attend a meeting at the Elysee Palace, Wednesday, May 15, 2019 in Paris. Several world leaders and tech bosses are meeting in Paris to find ways to stop acts of violent extremism from being shown online. (Charles Platiau/Pool via AP)

PARIS (AP) — The White House is not endorsing a global pledge to step up efforts to keep internet platforms from being used to spread hate, organize extremist groups and broadcast attacks, citing respect for “freedom of expression and freedom of the press.”

The statement came Wednesday after World leaders led by French President Emmanuel Macron and executives from Facebook, Google, Twitter and other tech companies gathered in Paris to compile a set of guidelines dubbed the “Christchurch Call,” named after the New Zealand city where 51 people were killed in a March attack on mosques. Much of the attack was broadcast live on Facebook, drawing public outrage and fueling debate on how to better regulate social media. Facebook said before the meeting that it was tightening rules for livestream users.

In a statement, the White House said it will “continue to be proactive in our efforts to counter terrorist content online” while also protecting free speech.

The Christchurch Call “is a global response to a tragedy that occurred on the shores of my country but was ultimately felt around the world,” said New Zealand Prime Minister Jacinta Ardern, who has played a leading role pushing for globally coordinated efforts to eliminate online extremism.

“Fundamentally it ultimately commits us all to build a more humane internet, which cannot be misused by terrorists for their hateful purposes,” she said at a joint news conference with Macron.

The French and New Zealand governments drafted the agreement — a roadmap that aims to prevent similar abuses of the internet while insisting that any actions must preserve “the principles of a free, open and secure internet, without compromising human rights and fundamental freedoms.”

The call was adopted by U.S. tech companies that also included Amazon, Microsoft and YouTube, along with France’s Qwant and DailyMotion, and the Wikimedia Foundation. Countries backing France and New Zealand were Britain, Canada, Ireland, Jordan, Norway, Senegal, Indonesia and the European Union’s executive body. Several other countries not present at the meeting added their endorsement.

The meeting in Paris comes at a pivotal moment for tech companies, which critics accuse of being too powerful and resistant to regulation. Some have called for giants like Facebook to be broken up. Europe is leading a global push for more regulation of how the companies handle user data and copyrighted material. The tech companies, meanwhile, are offering their own ideas in a bid to shape the policy response.

Unlike previous official attempts to regulate the internet, “the Christchurch Call is different in that it associates all actors of the internet” including the tech companies themselves, Macron said.

He said he hopes to get broader support for the agreement in coming months, with technical questions to be discussed by June.

In Wednesday’s agreement, which is not legally binding, the tech companies committed to measures to prevent the spread of terrorist or violent extremist content. That may include cooperating on developing technology or expanding the use of shared digital signatures.

They also promised to take measures to reduce the risk that such content is livestreamed, including flagging it up for real-time review.

And they pledged to study how algorithms sometimes promote extremist content. That would help find ways to intervene more quickly and redirect users to “credible positive alternatives or counter-narratives.”

Amazon, Facebook, Google, Microsoft and Twitter issued a joint supporting statement, outlining in further detail actions they would take individually or together to combat abuse of technology to spread extremist content. They include making it easier for users to flag up inappropriate content, using enhanced vetting for livestreaming and publishing transparency reports on material that’s removed.

Facebook, which dominates social media and has faced the harshest criticism for overlooking the misuse of consumer data and not blocking live broadcasts of violent actions, said separately it is toughening its livestreaming policies.

It’s tightening the rules for its livestreaming service with a “one strike” policy applied to a broader range of offenses. Activity on the social network that violates its policies, such as sharing an extremist group’s statement without providing context, will result in the user immediately being temporarily blocked. The most serious offenses will result in a permanent ban.

Previously, the company took down posts that breached its community standards but only blocked users after repeated offenses.

The tougher restrictions will be gradually extended to other areas of the platform, starting with preventing users from creating Facebook ads.

Facebook, which also owns Instagram and WhatsApp, said it’s investing $7.5 million to improve technology aimed at finding videos and photos that have been manipulated to avoid detection — a problem the company encountered with the Christchurch shooting, where the attacker streamed the killing live on Facebook.

“Tackling these threats also requires technical innovation to stay ahead of the type of adversarial media manipulation we saw after Christchurch,” Facebook’s vice president of integrity, Guy Rosen, said in a blog post.

The Christchurch Call was drafted as 80 CEOs and executives from technology companies gathered in Paris for a “Tech for Good” conference meant to address how they can use their global influence for public good — for example by promoting gender equality, diversity in hiring and greater access to technology for lower income users.

Ardern and Macron have insisted that the Christchurch guidelines must involve joint efforts between governments and tech giants. France has been hit by repeated Islamic extremist attacks by groups who recruited and shared violent images on social networks.

Free speech advocates and some in the tech industry bristle at new restrictions and argue that violent extremism is a societal problem that the tech world can’t solve.

Former U.S. Secretary of State John Kerry, a member of the Carnegie Endowment for International Peace, said that while “a higher level of responsibility is demanded from all of the platforms,” it is necessary to find a way to not censor legitimate discussion.

“It’s a hard line to draw sometimes,” he said.