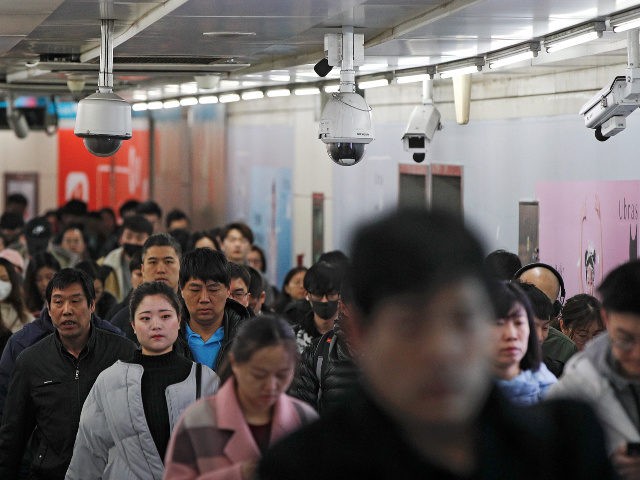 The article did not specify what these individuals did to find themselves on the list, though the regime has revealed the system assigns a numerical score to every Chinese citizen based on how much the Communist Party approves of his or her behavior. Anything from jaywalking and walking a dog without a leash to criticizing the government on the internet to more serious, violent, and corrupt crimes can hurt a person’s score. The consequences of a low credit score vary, but most commonly appear to be travel restrictions at the moment.

China is set to complete the implementation of the system in the country in 2020. As the date approaches, the government’s propaganda arms have escalated its promotion as necessary to live in a civilized society. Last week, the Chinese Communist Youth League released a music video titled “Live Up to Your Word” featuring well-known Chinese actors and musicians who cater to a teenage audience. The song in the video urged listeners to “be a trustworthy youth” and “give thumbs up to integrity” by abiding by the rules of the Communist Party. While it did not explicitly say the words “social credit system,” observers considered it a way to promote the behavior rewarded in social credit points.

Monday’s Global Times piece claimed it will “restore morality” by holding bad citizens accountable, with “bad” solely defined in the parameters set by Communist Party totalitarian chief Xi Jinping. The federal party in Beijing is also establishing a points-based metric for monitoring the performance of local governments, making it easier to keep local officials in line with Xi’s agenda.

“As of March, 13.49 million individuals have been classified as untrustworthy and rejected access to 20.47 million plane tickets and 5.71 million high-speed train tickets for being dishonest,” the Global Times reported, citing the government’s National Development and Reform Commission (NDRC). Among the new examples the newspaper highlights as dishonest behavior are failing to pay municipal parking fees, “eating on the train,” and changing jobs with “malicious intent.”

China had previously revealed that, as of March, the system blocked an unspecified number of travelers from buying over 23 million airplane, train, and bus tickets nationwide. That report did not say how many people the travel bans affected, as the same person could presumably attempt to buy more than one ticket or tickets for multiple means of transportation. The system blocked over three times the number of plane tickets as train tickets, suggesting the government is suppressing international travel far more than use of domestic vehicles. At the time of the release of the initial numbers in March, estimates found China had tripled the number of people on its no-fly list, which predates the social credit system.

The Chinese also reportedly found that some of the populations with the highest number of system violations lived in wealthy areas, suggesting Xi is targeting influential businesspeople with the system to keep them under his command.

In addition to limited access to travel, another punishment the Chinese government rolled out in March was the use of an embarrassing ringtone to alert individuals of a low-credit person in their midst. The ringtone would tell those around a person with low credit to be “careful in their business dealings” with them.

In the system, all public behavior, the Global Times explained Monday, will be divided into “administrative affairs, commercial activities, social behavior, and the judicial system” once the system is complete. No action will be too small to impact the score.

The Global Times preempted concerns about privacy and authoritarianism by arguing that Western minds were too “ignorant” to understand the benefits of the system.

“Chinese experts said how China, with a population of 1.4 billion people, processes the huge volumes of data is beyond the understanding of Western countries,” the article read. “The hypothetical theories of the West are based on their ignorance, Chinese experts say.”

While dismissing the West as too uncivilized to understand the system, China has already begun exporting it. Using the nominally private corporation ZTE, China sold a version of its credit system to socialist dictator Nicolás Maduro in Venezuela. The system would reportedly work through the already established “Fatherland Card,” a ration card used to distribute food and medicine to Maduro’s supporters. Anyone who indicated opposition to the regime put their food supply at risk. With ZTE technology, the “Fatherland Card” can track the purchases and real-time locations of any Venezuelan.

Huawei, another government entity masked as a private corporation, also sold advanced surveillance systems to Bolivia and Ecuador under their socialist regimes, according to the New York Times.