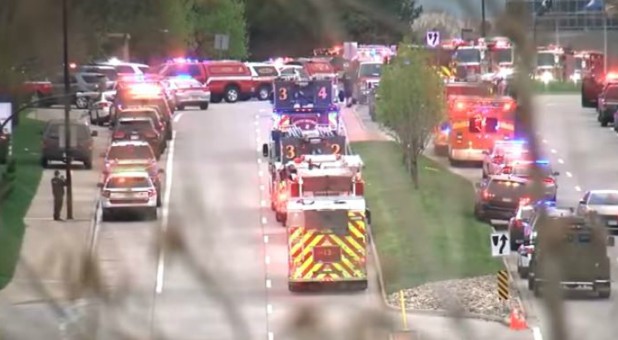 As more information emerges from the school shooting yesterday outside Denver, Christians grapple with the strange spiritual details that may have motivated the attack.

Two people entered the STEM Highlands Ranch School, about 25 miles outside Denver, yesterday. One student died, while eight more were injured. Some sources report one of the shooters is transgender. Other sources report the identified shooter, Devon Erickson, owned a car with multiple satanic symbols spray-painted on the body, including 666 and a pentagram.

“At the time, the individuals we believed were in custody were two males,” Douglas County Sheriff Tony Spurlock says. “It wasn’t until we got to this office that we were able to determine that one of the suspects [the juvenile] was a female.”

“You know what I hate? All these Christians who hate gays, yet in the bible, it says in Deuteronomy 17:12-13, if someone doesn’t do what their priest tells them to do, they are supposed to die,” Erickson reportedly posted to Facebook. “It has plenty of crazy stuff like that. But all they get out of it is ‘ewwwwww gays.'”

These strange details have some Christians looking beyond the physical realm for the answers to critical questions like motivation.

“This Colorado shooting is another heartbreaking tragedy, and I invite all of us to unite in prayer for those impacted at this time. Let us also pray for the authorities investigating the matter,” says Larry Tomczak, a Christian commentator and author. “Seduction and fascination with the demonic realm may be integral to the shooters’ involvement. Pastors and parents must seize this opportunity to give biblically informed insights on steering clear of these dangerous areas while at the same time guiding those we influence to Jesus, who triumphed over Satan and his minions.”

“What else can we expect when we’ve kicked God out of our schools and streets, public squares, courts, and our legislative and judicial process?” Bert Farias says. “All the rhetoric and politically correct talk is useless and just adds to the confusion. Darkness and death will continue to spread in our land until people humble themselves and turn from their wicked ways and submit to the Lord Jesus Christ.

“Gender identity is part of the confusion that comes on a culture void of the presence of the living God and true gospel preaching,” Farias continued. “And as for true Christians hating gays, this again is empty rhetoric shaped by a culture that continually separates Christianity from the Bible. Truth sounds like hate to those who hate biblical truth.”

Writer John Burton says, “I don’t remember anything close to the level of violence that we are seeing on a regular basis today 30 or 40 years ago when I was in school. Yet, today we’ve almost become desensitized to the terror on the streets and in our schools. It’s horrifying and the church must respond.”

He offered these solutions:

Read More:Definitive Proof There Really IS A War Against Christians