Washington (CNN)Intelligence showing that Iran is likely moving short-range ballistic missiles aboard boats in the Persian Gulf was one of the critical reasons the US decided to move an aircraft carrier strike group and B-52 bombers into the region, according to several US officials with direct knowledge of the situation.

The concerns over the movement of the missiles was one of multiple threads of intelligence from various sources that led the US to believe Iran had a capability and intention to launch strikes against US targets.
On Tuesday US Central Command spokesperson Capt. Bill Urban said they had seen “indications that Iranian and Iranian proxy forces were making preparations to possibly attack US forces in the region.” 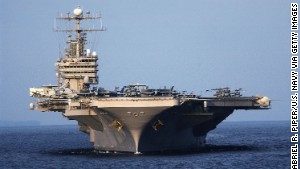 It’s not clear if the Iran could launch the missiles from the boats or if they are transporting them to be used by Iranian forces on land.
The Pentagon is considering sending additional firepower to the region including anti-missile defense systems, the officials said.
The US could send Patriot missile batteries back to the region months after the US had brought some back home. No final decision on additional deployments have been made but the officials made clear if the Iranians were to pull back, the batteries might not be needed.
The Pentagon currently believes Iran’s actions could put US and coalition forces at risk in Saudi Arabia, Bahrain and Qatar. US military and intelligence officials are monitoring the movement of the Iranian missiles around the clock but have yet to see a pullback.
The new maritime threat is also causing concern that Iranian-backed forces in Yemen could also move to threaten transit in the Red Sea. The US is not ruling out the possibility that Iran will strike US troop locations in Iraq and Syria, although Iran has been an ongoing threat there for some time.
The US strategy has been to make very public announcements about the carrier and bombers in hope of deterring Iran from any action.
Original Article:https://www.cnn.com/2019/05/07/politics/us-iran-transporting-missiles/index.html
Read More:Secretary Of State Mike Pompeo Calls For A ‘New Liberal Order’ To Unite Against Iran, Russia And China