With the measles and measles vaccine debate reaching a near frenzy on the Internet, it is always nice to throw some cold hard facts on the firestorm currently raging in the measles debate.

First, the Centers for Disease Control and Prevention (CDC) keeps a weekly tally of disease outbreaks, including deaths.

According to a statement made by Dr. Anne Schuchat, the director of CDC’s National Center for Immunization and Respiratory Diseases, in an Associated Press story picked up by Fox News on April 25, 2014: 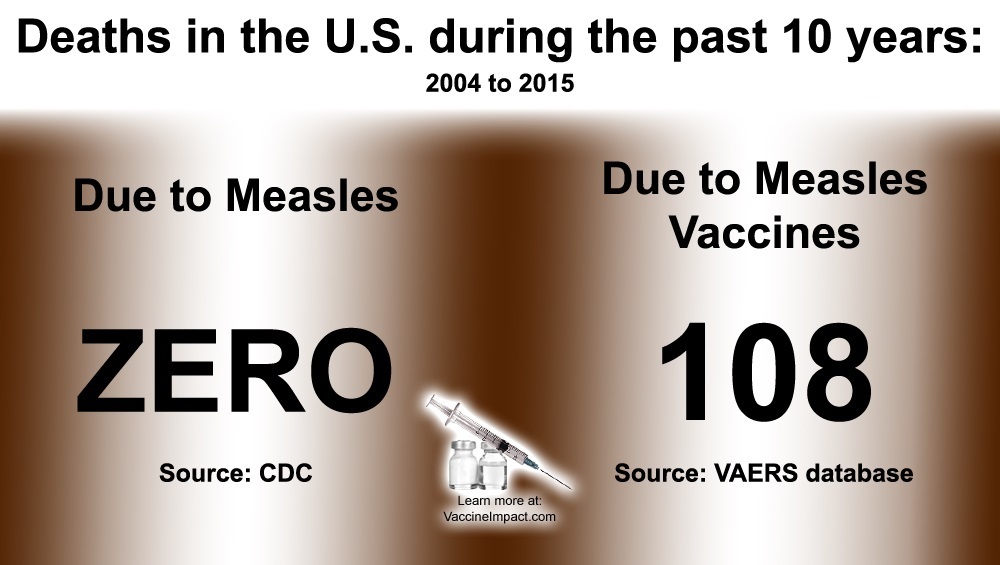 The weekly CDC Morbidity and Mortality Weekly Reports (MMWR) since that date have not revealed any measles deaths either. (*See edit below.)

And while health authorities are blaming measles outbreaks in recent years on unvaccinated children, when you mention the fact that nobody is dying from measles in the U.S., they are quick to turn around and claim vaccines have eliminated measles deaths (even though they cannot eliminate the disease itself apparently.)

Besides the obvious contradiction in reasoning with such a claim, the historical evidence just does not support it either: 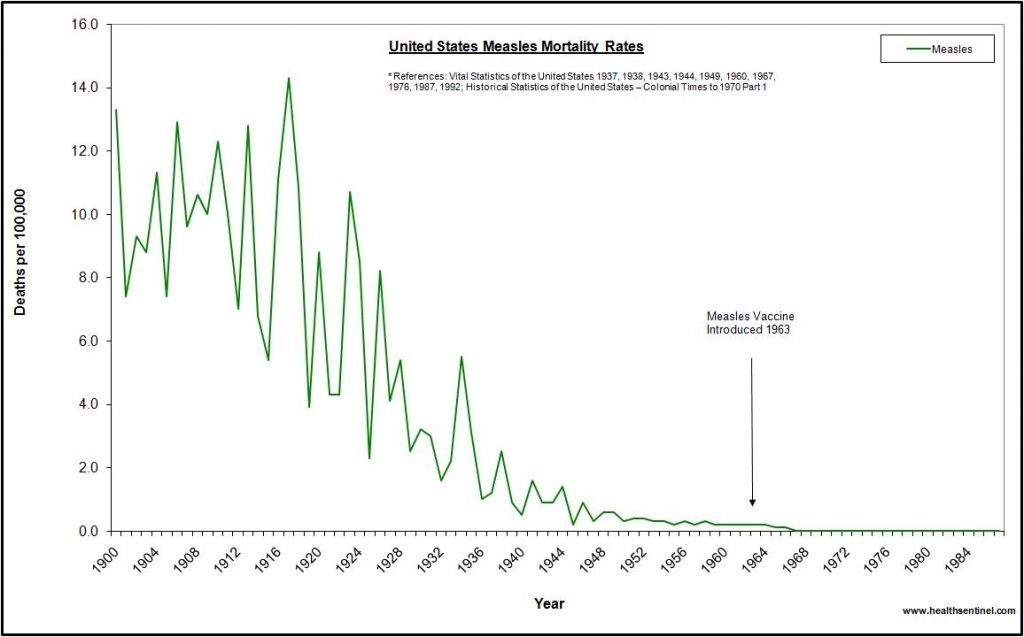 What about deaths associated with the measles vaccine during the same time period?

The U.S. Government keeps a database of reports called The Vaccine Adverse Event Reporting System (VAERS). The database is available to the public, and there is a search portal the public can use at Medalerts.org.

We ran a search for a ten year period for deaths reported with measles vaccines, including a few that are no longer in production.

The search result contained 108 deaths over this period, associated with four different measles vaccines sold in the United States during the past 10 years. 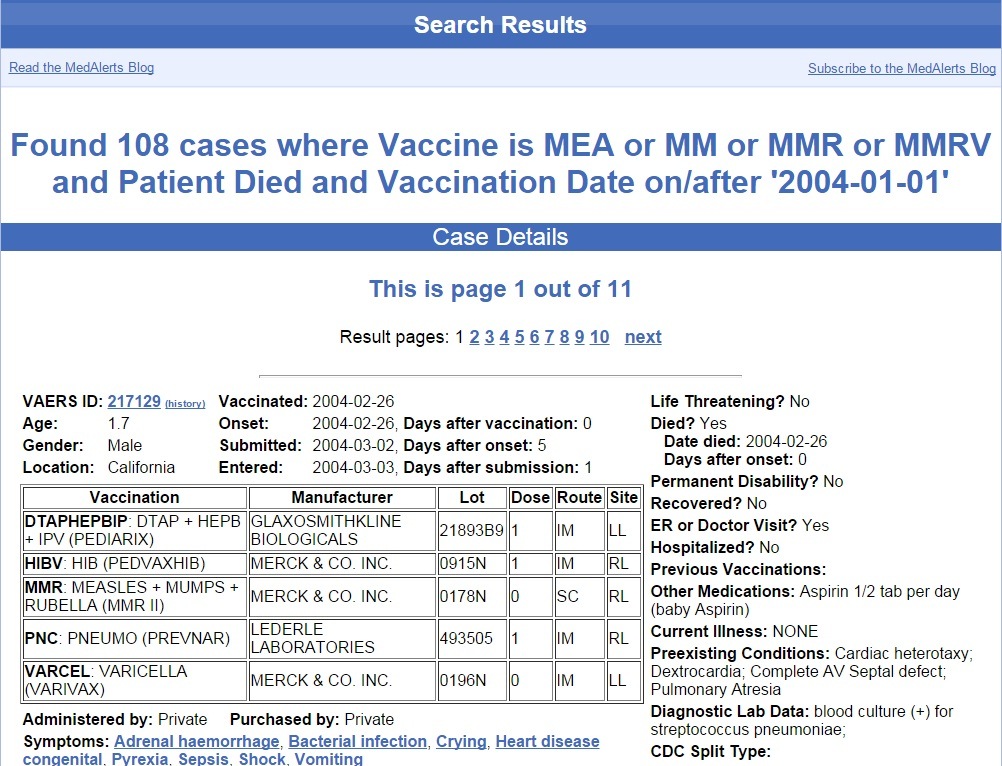 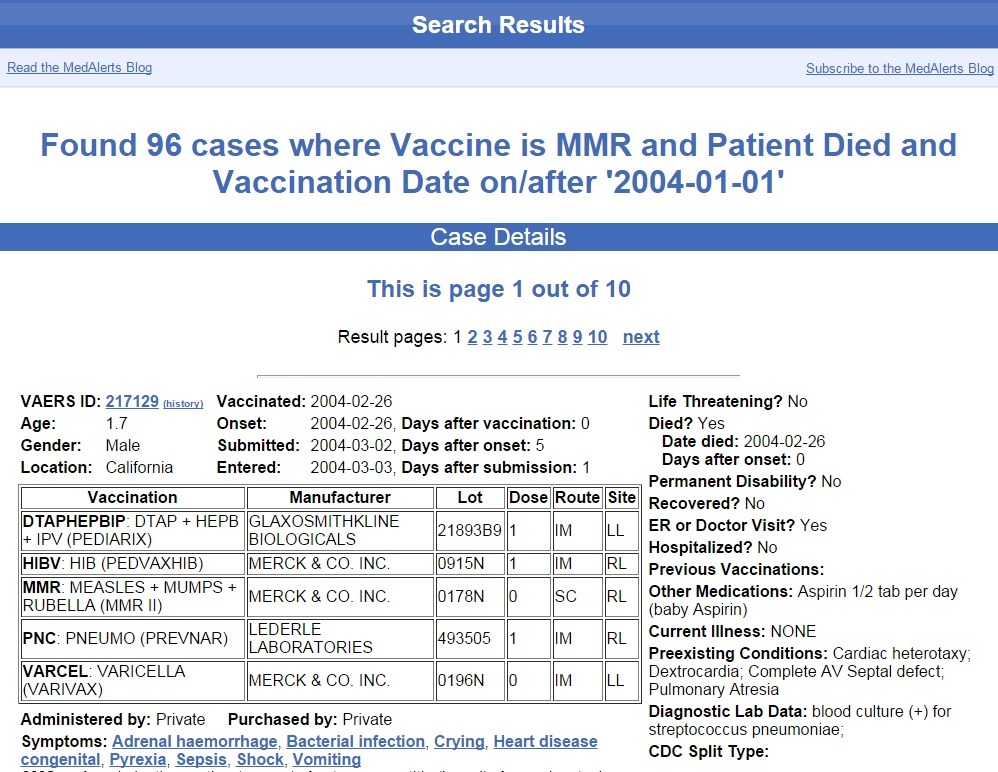 Anybody with a computer and Internet access can search this database by visiting MedAlerts.org.

This database reflects only deaths that were reported during the time frame, and therefore probably reflects a much lower number than actual deaths, since most doctors and health authorities believe vaccines are safe, and would not normally attribute a death to a vaccine and actually report it.

The U.S. public is largely unaware that manufacturers of vaccines have been given legal immunity from being prosecuted in civil court for vaccine injuries and deaths, since 1986.

If someone is injured or killed by a vaccine, they have to sue the U.S. Government in a special “vaccine court.”

The Department of Justice issues quarterly reports on claims and settlements, and one can search for specific vaccines settlements  at the United States Federal Courts website.

As search here for “measles” returns a result of 111 claims settled for the MMR vaccine since 2004. Some of them are for settlements due to deaths related to the MMR vaccine, as determined by the judge. 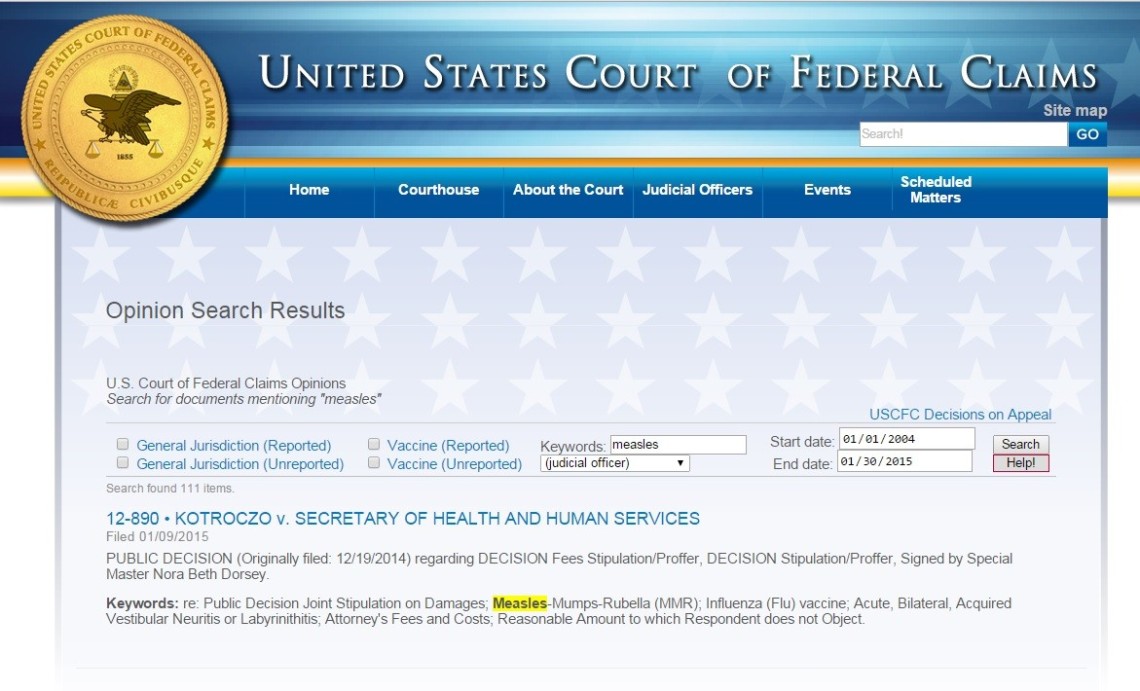 We did not click on and read each decision to find out how many resulted in deaths, but if we get a few reports from others who are willing to do so, and the numbers match, we will update this story with the actual death figure.

It takes many years to win a case in this vaccine court, so this probably represents only a tiny fraction of actual injuries and deaths due to the MMR vaccine.

Conclusion: Measles Vaccine Enthusiasm based Largely on Fear and Beliefs

We fully realize that those who believe in the value of vaccines will probably not be persuaded by these facts, which anyone with a computer and Internet access can verify from U.S. Government sources.

Having now published a few stories on the measles issue, and having received many hundreds of comments, it has become very clear to us that those who have strong opinions on the measles vaccine are based more on fear and beliefs, than they are on facts or science. Any attempt by these vaccine proponents to force their beliefs on the rest of the U.S. public should be vigorously opposed.