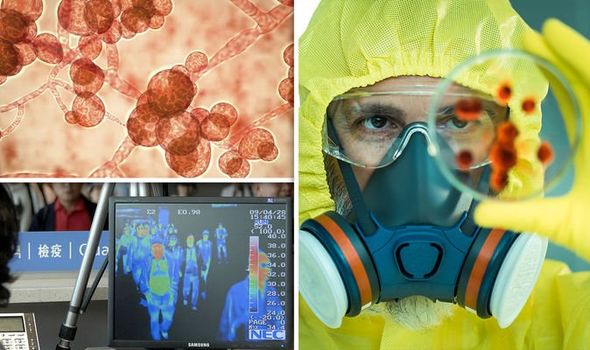 Candida Auris, the super-fungal infection behind the global panic, can infect anyone – but particularly affects people with compromised immune systems. The fungus is deadly – killing approximately 60 percent of patients that are infected. Scientists have branded the infection “incurable” amid a panic that the C. Aurus will become an “urgent global threat”.

Despite the rapid spread of the infection across the world, government health bodies and local hospitals with confirmed cases are staying silent on the fungus.

The fungi spreads very easily and can take over a hospital room, leading some hospitals to keep acknowledgment of an outbreak quiet.

International organisations have tried to downplay the spread of the threat, claiming public recognition would spark “hysteria”.

According to the CDC, symptoms of the fungus may be difficult to detect because patients are often already sick and only a lab test can identify the superbug.

Candida Auris can cause different types of infections, including bloodstream infection, wound infection, and ear infection.

The symptoms are similar to flu-like conditions – fever, aches, and fatigue.

Tom Chiller, head of the Centers for Disease Control’s (CDC) fungal branch, described C. Auris as “a creature from the black lagoon”.

He continued: “It bubbled up and now it is everywhere.”

The fungus was only seen in the US for the first time in 2013.

Since then, at least 587 cases have been confirmed over the last few years of an emerging fungus infection, identified by US health authorities as “a serious global health threat.”

David S. Perlin, chief scientific officer of the Hackensack Meridian Health Center for Discovery and Innovation, said: “It’s taken us all by surprise,”

“We don’t really know why globally this bug has burst on the scene all over the world.

“We’re seeing it in hospitals – we have a problem obviously in New York and New Jersey, but we see it in Spain, the United Kingdom, South Africa, other places.”

Read More:Mystery Illness Sweeping The Globe In A Climate Of Secrecy