The full pink moon is expected to occur on Good Friday at 12:12 BST (07.12 EST). Despite having the name, the moon will not actually appear as the colour pink. Its name is derived from a flower that blooms at the same time in Spring annually.

Stargazers around the world will be treated to a stunning astronomical display of a full Pink Moon on Good Friday.

Despite its name, the Pink Moon won’t actually be that colour but instead derives the name because it coincides with the blooming of a pink wildflower

The name comes from the Herb moss pink phlox, or ‘wild ground’ phlox, which blooms in early spring in the US and Canada

WHEN CAN YOU SEE THE PINK MOON?

According to the farmer’s Almanac, the peak fullness will be reached at 12.12 BST and this year, it will be visible from everywhere on Earth on Good Friday. 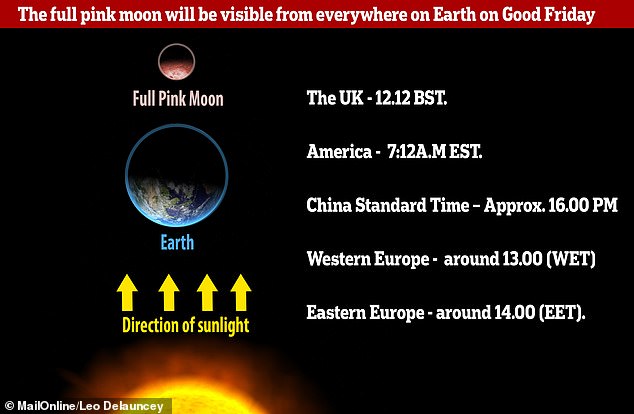 American commuters making their way to work will be able to catch the event as it reaches its peak at 7:12A.M EST.

In China, it will occur in the evening time starting from approximately 4pm, calculated from China Standard Time.

For the best chance of seeing it, try to head to an area with little light pollution, so the moon will look particularly bright in the night sky.

The pink moon has also been called the Sprouting Grass Moon, the Egg Moon, and the full Fish Moon.

According to an Old Wive’s Tale, many believe that labour can be induced by the lunar cycle and the start of a full moon.

The suggestion is that a full moon’s gravitational pull affects the amniotic fluid in the same way it affects the water in the sea and rivers, as well as influencing the levels of the hormone melatonin.

WHAT IS A FULL PINK MOON AND WHERE DOES IT GET ITS NAME?

In the Northern Hemisphere, the April full moon lines up with the blooming of one of spring’s earliest-flowering plants – wild ground phlox, or ‘moss pink’.

The pink moon, which is also known as the grass moon and the egg moon, was given its moniker by Native Americans, who provided a name for each full moon to help them keep track of time.

Native Americans have a name for the full moon of every month in the calendar, including Wolf Moon for January, Snow Moon for February and Worm Moon for March – then Flower Moon in May, Strawberry Moon is for June, Buck Moon is for July and Sturgeon Moon is for August. In September, there is a Harvest Moon, Hunter’s Moon is in October, Beaver Moon is in November and Cold Moon is in December.

According to the Ontario Native Literacy Coalition, the Ojibwe peoples indigenous to North America called it the Sucker Moon after the common fish species known as suckerfish. This fish, also known as the remora, is one of the animals that the Ojibwe saw as a messenger between the spirit world and ours. In the same region, the Cree called April’s full moon the Goose Moon, as April was the month when geese returned to the north after migrating south for the winter.

The Tlingit of the Pacific Northwest call the April full moon “X’eigaa Kayaaní Dís,” meaning “Budding moon of plants and shrubs,” according to the Tlingit Moon and Tide Teaching Resource published by the University of Alaska at Fairbanks.

In New Zealand, the Māori people had much different traditions for their April full moons, because in the Southern Hemisphere, April arrives in autumn. The Māori called the April moon “Paenga-whāwhā,” describing the month as a time when “all straw is now stacked at the borders of the plantations,” according to The Encyclopedia of New Zealand.

For the Jewish people, April 20 marks the beginning of the holiday of Passover (the 15th day of the lunar month of Nisan), which celebrates the escape from Egypt and has been popularized by films such as “The Ten Commandments” and Disney’s “The Prince of Egypt.”

After 3 Supermoons in January, February and March, let’s hope that April’s fullmoon will be as awesome!