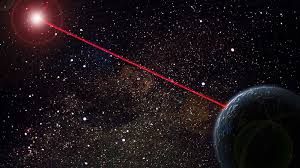 The Chinese know they cannot match the United States’ military prowess and technological advantages in aircraft, warships, missiles, other conventional weapons, so Beijing has been working hard on developing so-called “asymmetrical” — unconventional — systems instead.

One such asymmetrical capability the Chinese are working to perfect is anti-satellite warfare. According to a Chinese military expert, newly obtained commercial satellite photos indicate that Beijing has built a ground-based laser station in a western province, possibly with the intent of destroying or disabling enemy reconnaissance and tracking satellites in advance of a major conflict.

According to the Washington Free Beacon, the installation is located in the Xinjiang province, in addition to other high-technology weapons facilities. The base was discovered by retired Indian Army Col. Vinayak Bhat, who specializes on China.

He said that China is using the laser base and other satellite tracking facilities located around the vast country to identify and then target satellites.

“Once the accurate satellite path and other data is known, directed energy weapons located at five different places can take over the task,” Bhat said, as quoted by the Free Beacon.

He adds that the Xinjiang base comprises four main buildings that have sliding roofs that probably contain high-powered neodymium chemical lasers. Bhat also believes that a smaller building on the base contains laser tracking equipment. All told, the Chinese can fire one to three lasers at once against an orbiting satellite the People’s Liberation Army wants to take out.

China’s asymmetric development of anti-satellite laser technology isn’t unknown to the Pentagon. A Defense Intelligence Agency report that was made public in February said that Beijing was preparing to deploy a ground-based laser cannon in 2020. The report added that China “possibly already has a limited capability to employ laser systems against satellite sensors.”

“China likely will field a ground-based laser weapon that can counter low-orbit space-based sensors by 2020, and by the mid-to-late 2020s, it may field higher power systems that extend the threat to the structures of non-optical satellites,” the report, “Challenges to Security in Space,” noted.

The DIA says that laser weapons are designed to “disrupt, damage, or destroy enemy equipment and facilities.” They can also be deployed to blind us ahead of a Chinese invasion of Taiwan or even islands currently held by Japan that Beijing disputes.

Space-based sensors and lasers coming as part of missile defense

“These weapons, which can have effects ranging from temporary to permanent, include lasers, high-power microwaves, and other types of radiofrequency weapons,” the report added.

There are more than 207 military satellites currently in orbit around the earth at various distances, and the United States operates almost half of them. Satellite guidance systems are used not only to steer weapons but also to help defend against incoming missiles.

That said, one of the newest asymmetric weapons that China is developing is a hypersonic missile, which — like anti-satellite (ASAT) lasers — could be used as a first-strike weapon because the U.S. currently has no adequate defense against missiles traveling at five-to-seven times the speed of sound (Mach).

Ian Easton, a China analyst at the Project 2049 Institute, told the Free Beacon that the U.S. is vulnerable to Beijing’s ASAT weapons.

“China has also apparently tested and deployed at least one large, ground-based ASAT laser weapon for use on a number of targets in [low-earth orbit], and is developing a submarine-based ASAT missile with which it could eventually target U.S. national security satellites in [geosynchronous orbit],” he told the news site.

The Pentagon is considering the development of its own new satellite constellation designed to track and interdict incoming hypersonic missiles. That could include placing anti-missile lasers in space, to disable or destroy hypersonic missiles in flight, The National Sentinel reported.

“Look for rapid progress on that,” Undersecretary of Defense for Research and Engineering Mike Griffin told reporters in January regarding the Defense Department’s Space Sensor Layer.