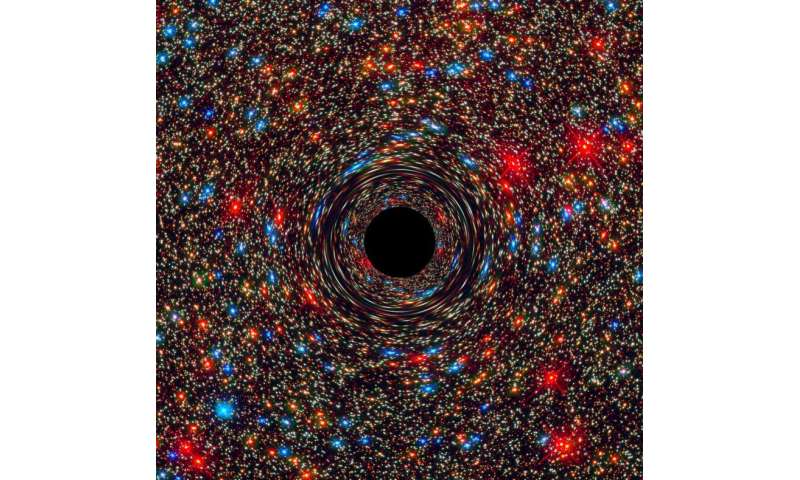 Paris (AFP) – Astronomers are poised Wednesday to unveil the first direct image of a black hole and the surrounding whirlwind of white-hot gas and plasma inexorably drawn by gravity into its ravenous maw, along with the light they generate.

The picture will have been captured by the Event Horizon Telescope (EHT), a network of eight radio telescopes scattered across the globe.

Paul McNamara, an astrophysicist at the European Space Agency and project scientist for the LISA mission that will track massive black hole mergers from space, helped AFP put what he called an “outstanding technical achievement” into context.

How do we know black holes exist?

“We think, of course, of a black hole as something very dark. But the mass it sucks in forms a so-called accretion disk that gets so hot it glows and emits light.

Over the years, we accumulated other indirect observational evidence -– X-rays coming off objects, for example, in other galaxies.

In September 2015, the LIGO gravitational wave detectors in the US made a measurement of two black holes smashing together.

All the evidence we have from around the universe -– X-rays, radio-waves, light -– points to these very compact objects, and the gravitational waves confirmed that they really are black holes, even if we have never actually seen one.”

What is an ‘event horizon’?

“At the centre of a black hole is something we call a ‘singularity’ -– a huge amount of mass shrunk down to an infinitely small, zero-dimensional point in space.

If you get a certain distance away from that singularity, the escape velocity drops under the speed of light. That’s the event horizon.

It is not a physical barrier -– you couldn’t stand on it. If you’re on the inside of it, you can’t escape because you would need infinite energy. If you are on the other side, you could escape — in principle.”

How big is a black hole?

“The diameter of a black hole depends on its mass but it is always double what we call the Schwarzschild radius.

If the Sun were to shrink to a singularity point, the Schwarzschild radius would be three kilometres, and the diameter would be six.

For Earth, the diameter would be 18 millimetres, or about three-quarters of an inch. The event horizon of the black hole at the centre of the Milky Way, Sagittarius A*, measures about 24 million kilometres across.

Sagittarius A* — which has four million times the mass of the Sun — is one of two black holes targeted by the EHT. The other, even bigger, is in the galaxy M87.”

“The Event Horizon Telescope is not looking at the black hole per se, but the material it has captured.

It won’t be a big disk in high resolution like in the Hollywood movie ‘Interstellar’. But we might see a black core with a bright ring — the accretion disk — around it.

The light from behind the black hole gets bent like a lens. No matter what the orientation of the disc, you will see it as a ring because of the black hole’s strong gravity.

Visually, it will look very much like an eclipse, though the mechanism, of course, is completely different.”

How is the image generated?

“The technical achievement is outstanding. Rather than having one telescope that is 100 metres across, they have lots of telescopes with an effective diameter of 12,000 kilometres — the diameter of Earth.

The data is recorded with very high accuracy, put onto hard disks, and shipped to a central location where the image is reconstructed digitally.

This is very, very, very long baseline interferometry -– over the entire surface of the Earth.”

Any threat to general relativity?

“Einstein’s theory of general relativity fits all the observations made so far related to black holes.

The gravitational wave signature from the LIGO experiments, for example, was exactly what the theory says would be expected.

But the black holes LIGO measured were small, only 60-100 times the mass of the Sun. Maybe black holes millions of times more massive are different. We don’t know yet.

We should see a ring. If we see something elongated on one axis, then it can no longer be a singularity — that could be a violation of general relativity.”

Read More:Scientists Are About To Make A Ground-Breaking Announcement About Black Holes

Read More:Einstein’s Theory Of Singularity Could Be Incorrect, New Research Posits That Black Holes Are Worm Holes To The Future