The severe flooding in the American midwest is set to only be a prelude to “unprecedented” levels of flooding across the US in the coming months that will imperil 200 million people, federal government scientists have warned. 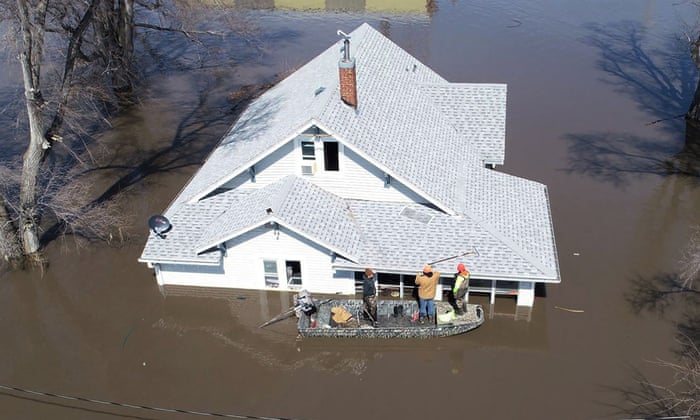 Nebraska floods: private pilots fly in to help city walled off by water

Nearly two-thirds of the lower 48 states will have a heightened risk of flooding until May, according to the National Oceanic and Atmospheric Administration (Noaa) forecast.

Communities living near the Mississippi river, which has received rain and snow levels up to 200% above normal, the lower Ohio river basin, the Tennessee river basin and the Great Lakes are at the greatest risk, Noaa said on Thursday. Vast swaths of the rest of the country may also get mild or moderate flooding, including most of eastern US and parts of California and Nevada.

“The extensive flooding we’ve seen in the past two weeks will continue through May and become more dire and may be exacerbated in the coming weeks as the water flows downstream,” said Ed Clark, director of Noaa’s National Water Center in Tuscaloosa, Alabama.

“This is shaping up to be a potentially unprecedented flood season, with more than 200 million people at risk for flooding in their communities.”

The flooding has been fueled by rapid snow melt combined with heavy rainfall that has already inundated much of the midwest and plains, particularly in Nebraska and Iowa. The torrents of rainfall have not been able to penetrate the frozen ground, causing water to swell rivers and make them break their banks.

Noaa said that further spring rain, combined with melting snow, will make the flood threat “worse and geographically more widespread”, extending to southern states such as Louisiana, Mississippi and Tennessee.

A string of small Missouri towns prepared for the next deluge along the raging Missouri river on Wednesday after flooding wreaked nearly $1.5bn in damage in Nebraska, killing at least four people and leaving another man missing.

Surging waters after a late winter storm have already damaged hundreds of homes in the midwest this week, and been blamed for at least three deaths, two in Nebraska and one in Iowa. The flooding led to trains being halted in Missouri, creating transportation problems for people and products. It also has taken a heavy toll on agriculture, inundating tens of thousands of acres, threatening stockpiled grain and killing livestock.

Scientists say climate change is responsible for more intense and more frequent extreme weather such as storms, floods, droughts and fires, but without extensive study they cannot directly link a single weather event to the changing climate.

The expected surge of water from the north is unwelcome news in parts of Mississippi. In the western part of that state, the Mississippi river is already swollen and has been flooding some communities unprotected by levees since last month.

One Mississippi region protected by levees is also flooding. That’s because smaller rivers can’t drain into the Mississippi river as normal because a floodgate that protects the region from even worse flooding by the big river has been closed since 15 February.

Around Rolling Fork, Mississippi, townspeople first noticed water rising from swamps near the Mississippi river in late February. The water eventually invaded some homes in that community, about 40 miles (65km) north of Vicksburg.

Major flooding is already occurring this week on the Mississippi river near several southern cities including Arkansas City, Arkansas; Natchez, Mississippi; and Baton Rouge, Louisiana, according to river gauges and data from Noaa.

Noaa has also warned of flooding in coastal areas, caused by high tides. In its coastal forecast, the agency said the east and west coasts of the US can expect a slightly higher than normal chance of flooding this spring.

“The flooding isn’t only a factor in the midwest, it’s also on the coasts,” said William Sweet, a coastal flooding expert at Noaa. “There’s a clear climate change signal from the rising seas and the mid-Atlantic area in particular is in the crosshairs. Climate change is here, it’s clear and communities are being flooded far more than they used to be.”

Sweet said Noaa expects the mid-Atlantic region, stretching from New Jersey to Virginia, to experience a massive increase in flooding days, up from around 10 days to as many as 130 days a year, by 2050. “The numbers are staggering, some places will be flooding almost every other day,” he said.

Read More:Extreme Weather Disasters Becoming More Extreme In The US

Read More:How To Adapt To The End Of The World