The Norimitsu Odachi is a huge sword from Japan. It is so large, in fact, that it was said to have been wielded by a giant. Apart from the basic knowledge of it having been forged in the 15th century AD, measuring 3.77 meters (12.37 ft.) in length, and weighing as much as 14.5 kg (31.97 lbs.), this impressive sword is shrouded in mystery.

The History of Odachi

The Japanese are r enowned for their sword-making technology . Many varieties of blades have been produced by the swordsmiths of Japan, but arguably the one most people today are familiar with is the katana due to its association with the famed samurai. Nevertheless, there are also other types of lesser- known swords that were produced over the centuries in Japan, one of which is the odachi.

The odachi (written as 大太刀 in kanji, and translated as ‘large / great sword’), sometimes referred to as nodachi (written in kanji as 野太刀, and translated as ‘field sword’) is a type of long bladed Japanese sword. The blade of the odachi is curved, and typically has a length of about 90 – 100 cm (35.43-39.37 inches). Some odachi are even recorded to have had blades that were 2 meters (6.56 ft.) long. 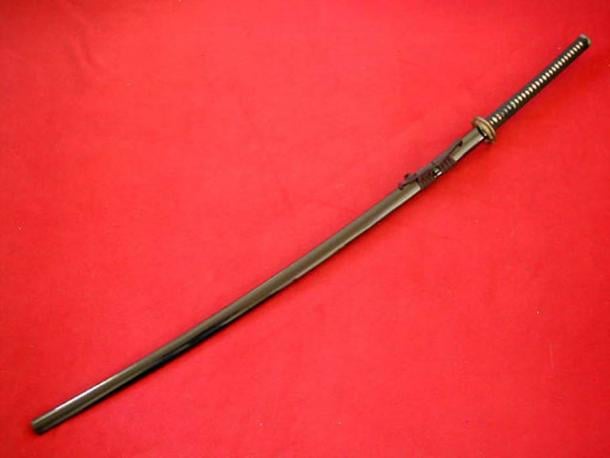 The odachi is reputed to have been one of the weapons of choice on the field of battle during the Nanboku-chō period, which lasted for a large part of the 14th century AD. During this period, the odachis that were produced are recorded to have been over a meter long. This weapon, however, fell out of favor after a short period of time, the main reason being that it was not a very practical weapon to use in battles. Still, the odachi continued to be used by warriors and its usage only died out in 1615, following the Osaka Natsu no Jin (known also as the Siege of Osaka), during which the Tokugawa Shogunate destroyed the Toyotomi clan.

This Nodachi long sword at over 1.5 meters (5 feet) long is still small in comparison to the Norimitsu Odachi ( CC BY NC 2.0 )

There are a number of ways in which the odachi may have been used on the battlefield. The most straightforward of these is that they were simply used by foot soldiers. This can be found in literary works such as the Heike Monogatari (translated as ‘The Tale of the Heike’) and the Taiheiki (translated as ‘Chronicle of Great Peace’). A foot soldier wielding an odachi might have had the sword slung across his back, instead of by his side, due to its exceptional length. This, however, made it impossible for the warrior to draw the blade quickly. 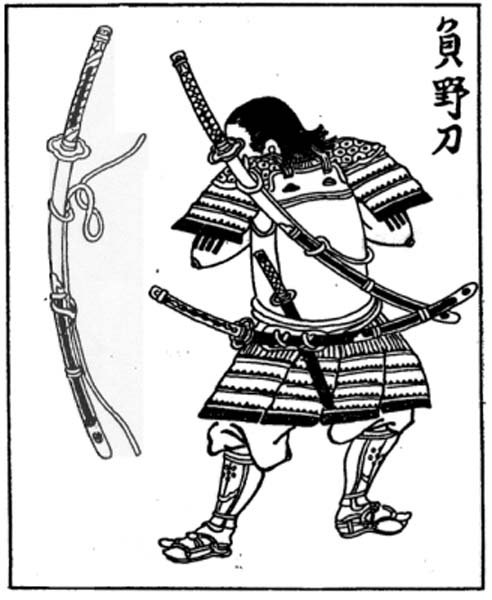 A Japanese Edo period wood block print of a samurai carrying a nodachi (field sword) on his back. ( Public Domain )

Alternatively, the odachi might have just been carried by hand. During the Muromachi period (which lasted from the 14th till the 16th centuries AD), it was common for a warrior carrying the odachi to have a retainer who would help to draw the weapon for him. It is possible that the odachi was wielded by warriors who fought on horseback as well.

It has also been suggested that, as the odachi was a cumbersome weapon to use, it was not actually utilized as a weapon in combat. Instead, it could have been used as a kind of standard for an army, similar to the way a flag would have been employed during a battle. Furthermore, it has been pointed out that the odachi took on a more ritualistic role. During the Edo period, for example, it was popular for the odachi to be used during ceremonies. Apart from that, odachis were sometimes placed in Shinto shrines as an offering to the gods. The odachi may have also served as a showcase of a swordsmith’s skills, as it was not an easy blade to manufacture.

A Japanese woodblock print of Hiyoshimaru who meets Hachisuka Koroku on Yahabi bridge. Cropped and edited to show the ōdachi hanging on his back. ( Public Domain )

Was the Norimitsu Odachi Practical or Ornamental?

With regards to the Norimitsu Odachi, some favor the view that it had been used for practical purposes, and therefore its user must have been a giant. A simpler explanation for this exceptional sword is that it was used for non-combative purposes.

The manufacture of such an extraordinarily long blade would have only been possible in the hands of a highly skilled swordsmith. Therefore, it is plausible that the Norimitsu Odachi was purely meant to showcase the swordsmith’s ability. In addition, the person who commissioned the Norimitsu Odachi would probably have been very wealthy, as it would have cost a lot to produce such an object. 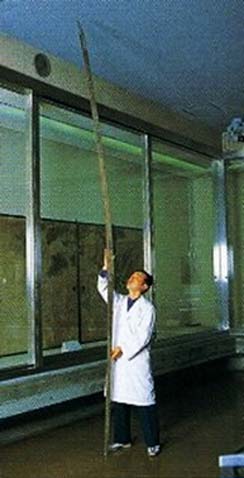 Read More:There Were Giants In Those Days, Also After: Who Was The ‘Glastonbury Giant’?

Read More:Grave Of A ‘Giant’ Medieval Warrior Unearthed In Germany

Read More:10 Pieces Of Evidence That Support The Biblical Account Of Giants