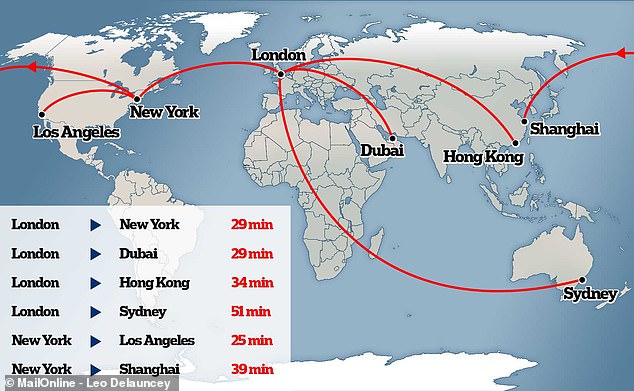 A trip from London to New York would only take 29 minutes and less than one hour to Sydney on Elon Musk’s SpaceX Starship.

Getting from point-to-point on Earth by travelling through outer-space could ‘cannibalise’ the current market for journeys lasting over 10 hours.

The company also claims that the space tourism industry will be worth £2.3 billion ($3bn) by 2030.

The future of long-distance air travel on earth will feature rockets entering the upper atmosphere before returning to Earth, said the financial experts.

Such high-speed travel via outer space’ represents a very lucrative market for the likes of SpaceX and Virgin Galactic, who are competing in a space tourism race.

Jarrod Castle and Myles Walton, analysts with UBS, said: ‘Although some might view the potential to use space to service the long-haul travel market as science fiction, we think there is a large market.’

‘While space tourism is still at a nascent phase, we think that as technology becomes proven, and the cost falls due to technology and competition, space tourism will become more mainstream.’

For longer haul flights such as London to Sydney, which can currently take 23 hours, a rocket would take less than an hour.

Space tourism to Mars and other planets will also become a reality, they said, with hotels signing up to build outposts in space stations. 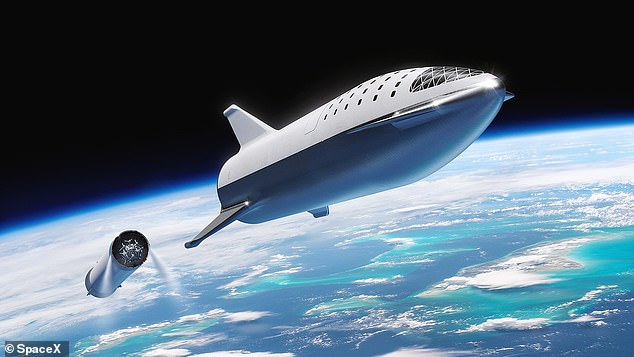 SpaceX’s Starship rocket has been tapped to take man to the moon and Mars but it may also be used for travel to destinations on Earth. Long-haul flights between countries may be wiped out by rocket travel that shoot a spacecraft into outer-space and back down to Earth again 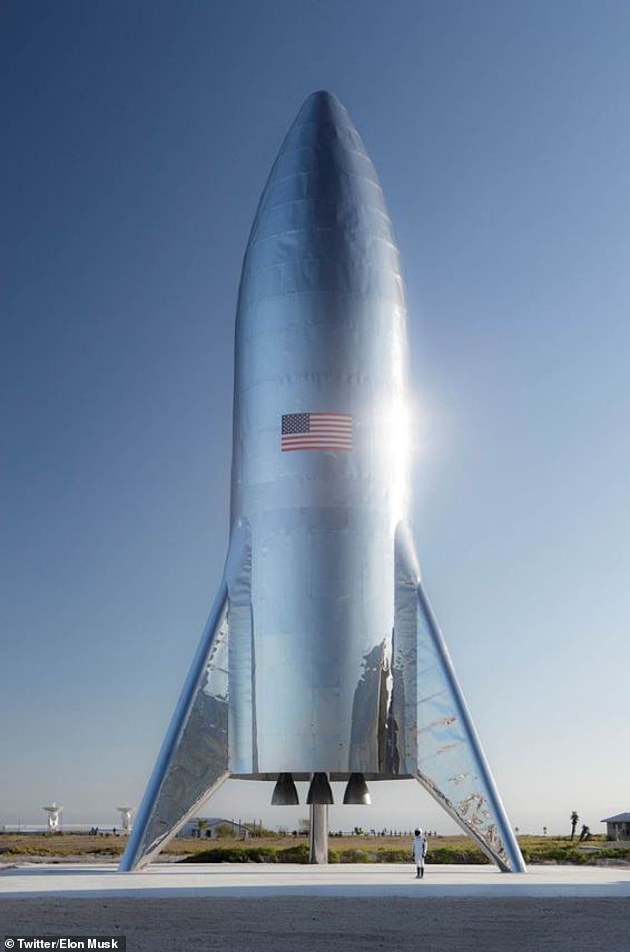 A journey from London to New York in the future could take less than 30 minutes in a rocket, according to experts. In January, Elon Musk’s space travel programme SpaceX revealed images of its fully-assembled Starship hopper test rocket

Bezos revealed in April 2017 that he finances Blue Origin with around $1 billion (£720 million) of Amazon stock each year.

The system consists of a pressurised crew capsule atop a reusable ‘New Shepard’ booster rocket.

The richest man in the world, Jeff Bezos is pursuing Blue Origin with vigour as he tries to launch his ‘New Glenn’ rocket into low-Earth orbit by 2020.

Whilst Bezos is yet to leave the atmosphere of Earth, despite several successful launches, Elon Musk’s SpaceX programme has already sent the Falcon Heavy rocket into space.

On February 6 2018, SpaceX sent the rocket towards the orbit of Mars, 140 million miles away.

On board was a red Tesla roadster that belonged to Musk himself.

SpaceX have won several multi-million dollar contracts from Nasa as the space agency hopes to use the rockets as a fast-track for its colonisation of the red planet.

It has successfully sent a Dragon capsule to the ISS and undocked without a hitch.

NASA has already selected two astronauts who will be on-board the first manned Dragon mission.

The billionaire mogul also said he expects Elon Musk to win the race to Mars with his private rocket firm SpaceX.

SpaceShipTwo can carry six passengers and two pilots. Each passenger gets the same seating position with two large windows – one to the side and one overhead.

The space ship is 60ft long with a 90inch diameter cabin allowing maximum room for the astronauts to float in zero gravity.

A climb to 50,000ft before the rocket engine ignites. Passengers become ‘astronauts’ when they reach the Karman line, the boundary of Earth’s atmosphere, at which point SpaceShipTwo separates from its carrier aircraft, White Knight II.

The spaceship will then make a sub-orbital journey with approximately six minutes of weightlessness, with the entire flight lasting approximately 3.5 hours.

The race to be the first company to send passengers to space is being fought between Virgin Galactic’s Sir Richard Branson, SpaceX founder Elon Musk and Amazon CEO Jeff Bezos’ Blue Origin.

UBS predicts that the market is huge even if a small percentage of passengers on turn to rocket travel to get from point to point.

Elon Musk’s Starship rockets has a capacity of 100, and spacecraft sizes may be a limiting factor for the foreseeable future.

USB said it is unlikely that any rocket will carry over 300 people anytime soon, but that more frequent flights could solve the problem. 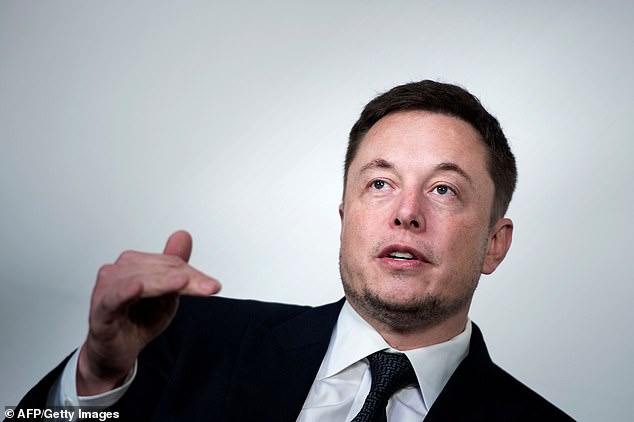 SpaceX and Tesla CEO Elon Musk hopes to bring ‘space tourists’ to the moon by 2024, along with other plans to use Starship to reach the red planet sometime in the future 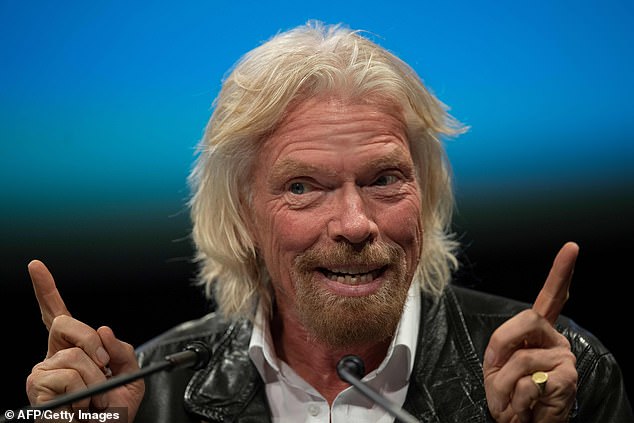 British billionaire Richard Branson, pictured here, travelled to space aboard his own Virgin Galactic spaceship. Virgin Galactic is one of two companies, along with Blue Origin, on its way to sending passengers into space 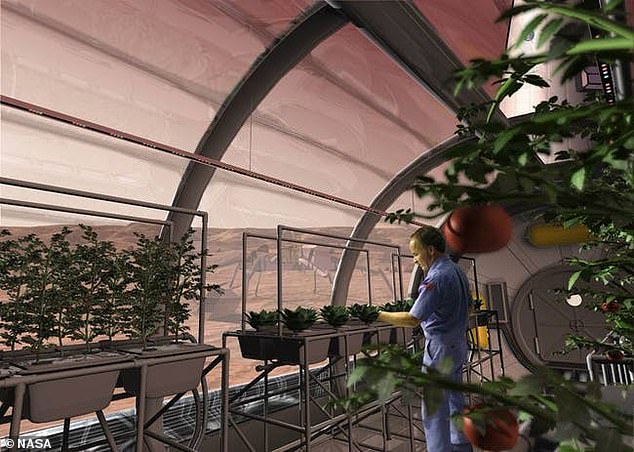 Elon Musk believes humans on Mars can cultivate food through hydroponics, or growing plants without soil. Pictured is a mock up of an astronaut using hydroponics to grow food on Mars

SpaceShipTwo’s flight reached for the second time on February 22nd.

Read More:New SpaceX Rocket To Make It To Mars And Back In One Day- For Mars Colonization