An Ethiopian Airlines jet crashed minutes after departing Addis Ababa, killing all 157 aboard—including eight Americans and 18 Canadians—leading to an unsually swift reaction regarding Boeing Co.’s 737 MAX in the wake of the second deadly disaster involving the new model in recent months.

China’s Civil Aviation Administration ordered the temporary grounding of all Boeing 737 MAX aircraft—which is in growing use in the U.S. and abroad—flown by Chinese airlines. Ethiopian Airlines said early Monday it grounded its MAX aircraft as well, as an “extra safety precaution” despite not knowing the cause of the crash. Cayman Airways, a small operator with two 737 MAX planes, said on its website it would ground those planes starting Monday until it gets more information. An Indonesian official told The Wall Street Journal that authorities are planning to meet Monday to discuss whether to ground the aircraft there. And a flight attendants union called for an FAA investigation.

Shortly after taking off on Sunday, the jetliner’s pilot reported an unspecified problem with the plane and asked to return to the Ethiopian capital’s Bole International Airport. Six minutes after departure, communication was lost, and the plane plunged to the ground near Bishoftu, just south of Addis Ababa.

A number of people on board Flight 302 to Nairobi were heading to a global United Nations Environment Program summit. The U.N.’s World Food Program also had multiple staff members on the flight, said its head, David Beasley.

Citizens from many nations were among those on the aircraft, in addition to the Americans and Canadians, including French, Chinese and British nationals, said Kenyan Transport Minister James Macharia. The largest loss of life was from Kenya, with 32 deaths.

Boeing’s 737 MAX is an updated version of the U.S. plane maker’s best selling single-aisle plane, and was delivered to its first customer in May 2017. The model suffered its first fatal crash in Indonesia on Oct. 29. Accident investigators said that plane, operated by Lion Air, suffered unreliable sensor information before it went down in the Java Sea, killing 189 people.

Note: All times are local.

Because the crashes happened in relatively quick succession and involved the same brand-new model, a former Federal Aviation Administration official said regulators likely would focus initial fact-finding efforts in part on potential relationships between the accidents before deciding whether to take any additional steps.

“There’s going to be a lot of attention on this,” the former FAA official said. “These are incredibly rare events.”

For Boeing, the Lion Air crash marked the first time since the mid-1990s that the basic design of one of its safety systems was directly implicated in a major airliner crash with dozens of fatalities. Some of the company’s technical decision-making emerged as the focus of controversy and public debate in the wake of the Indonesian crash, with Boeing officials facing unusually sharp criticism from some pilot unions and airline officials world-wide. 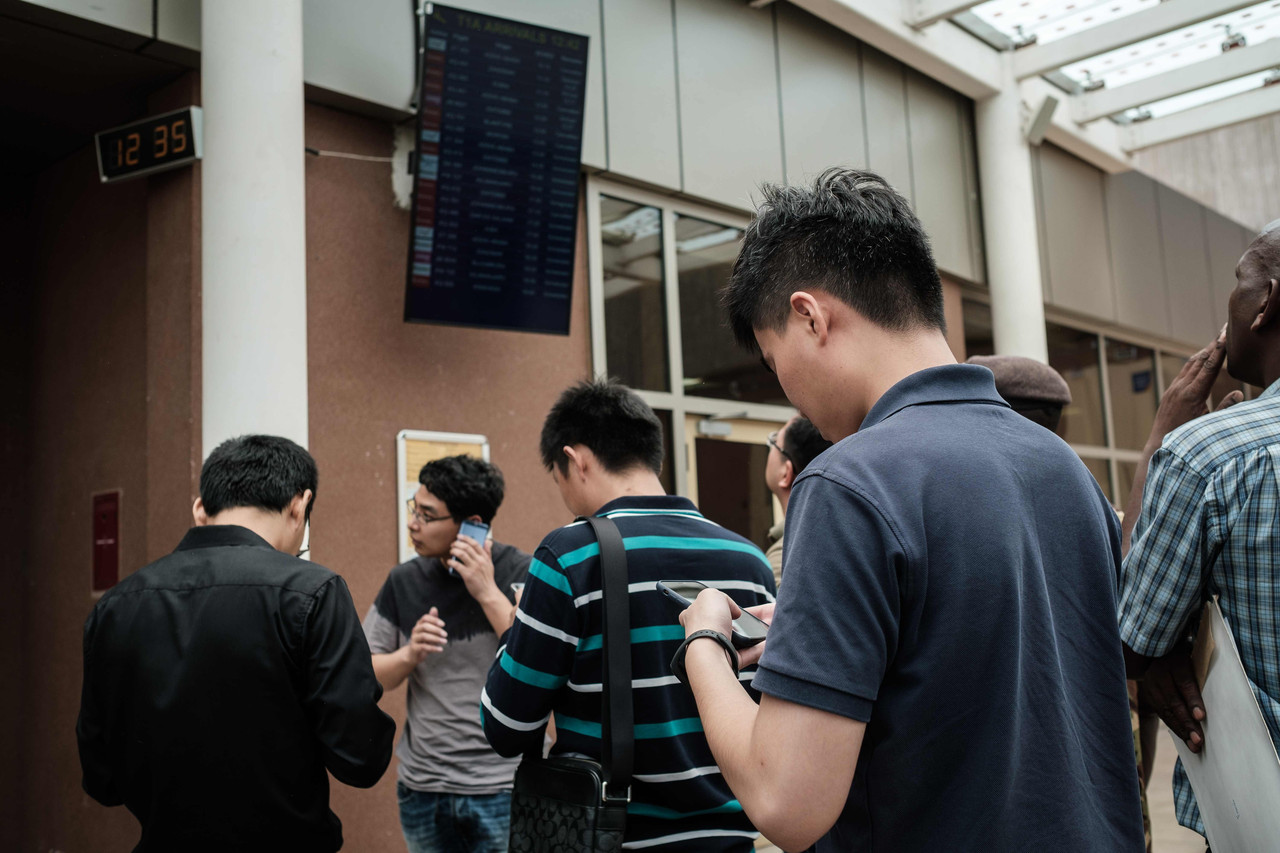 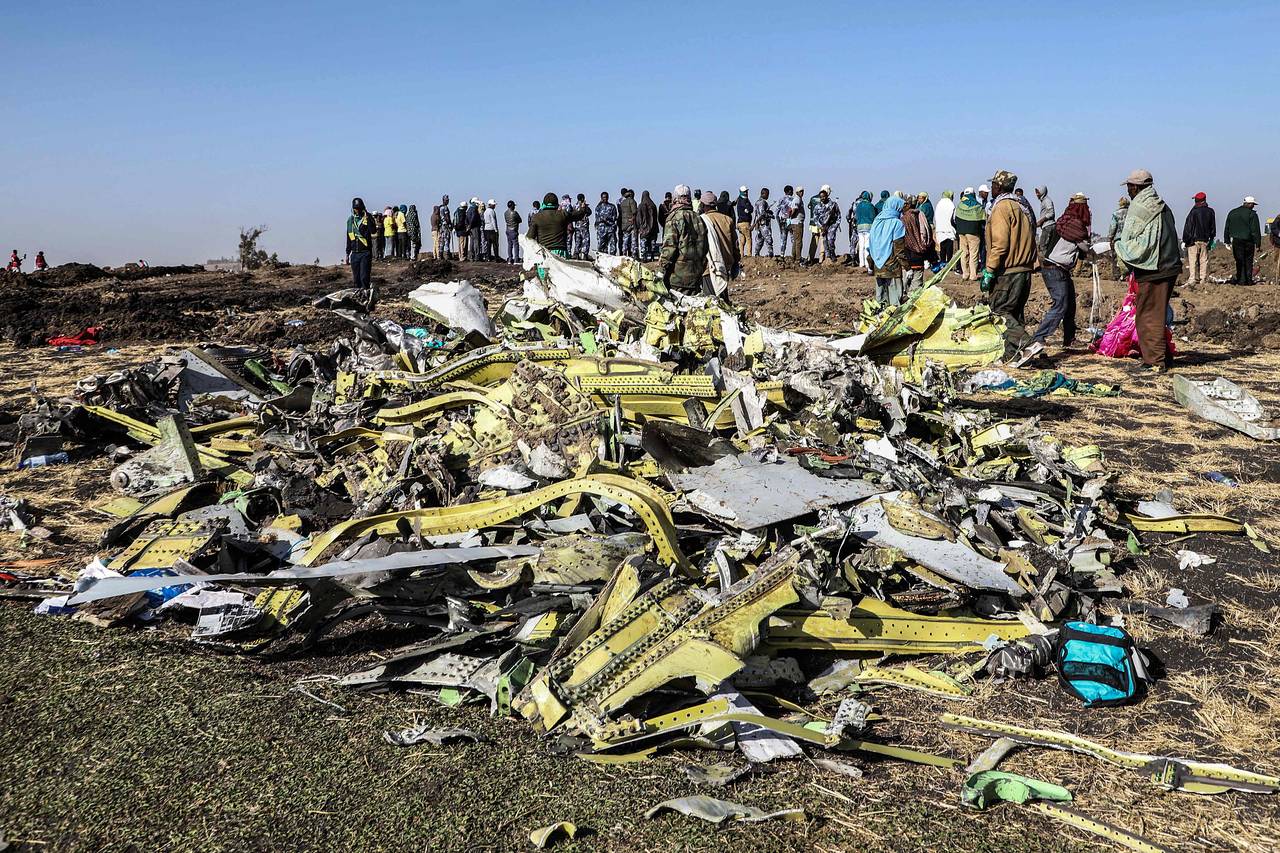 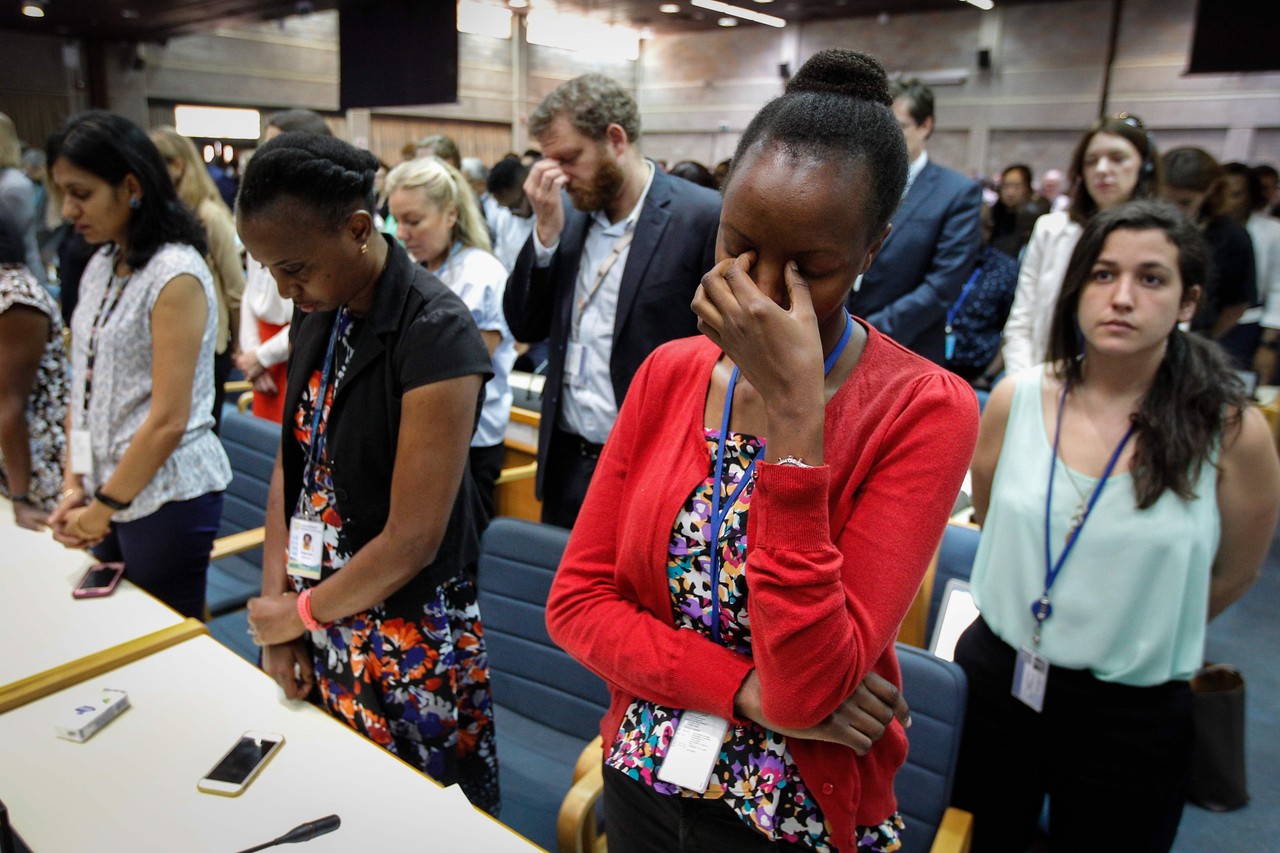 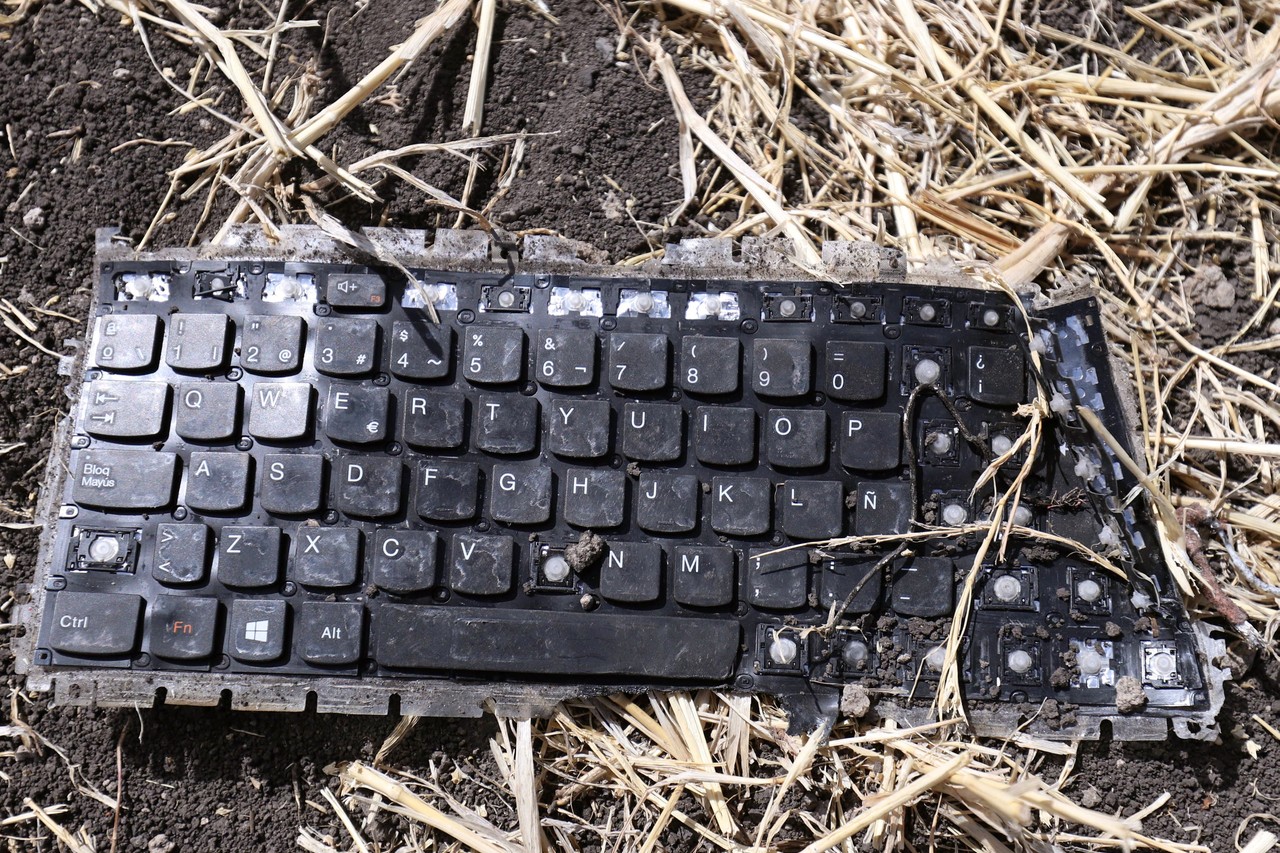 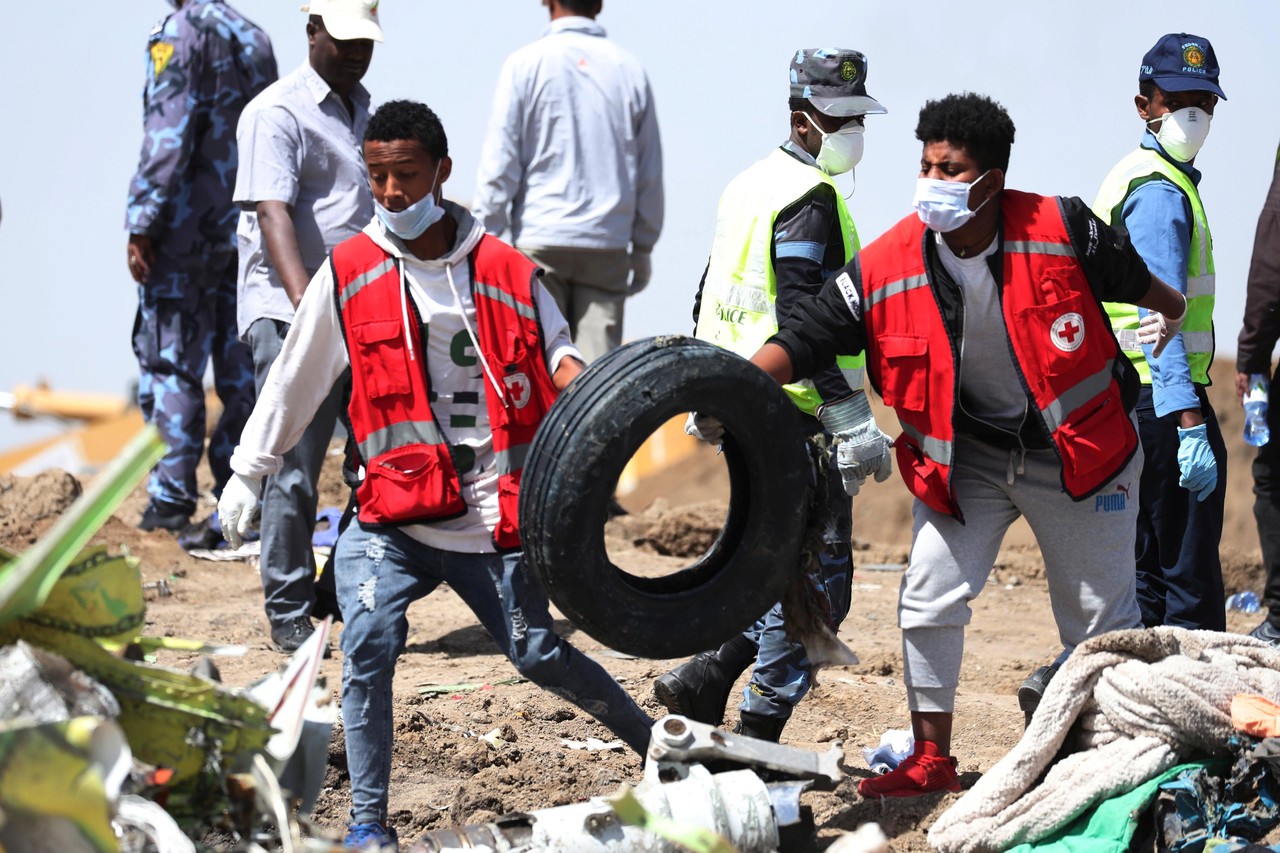 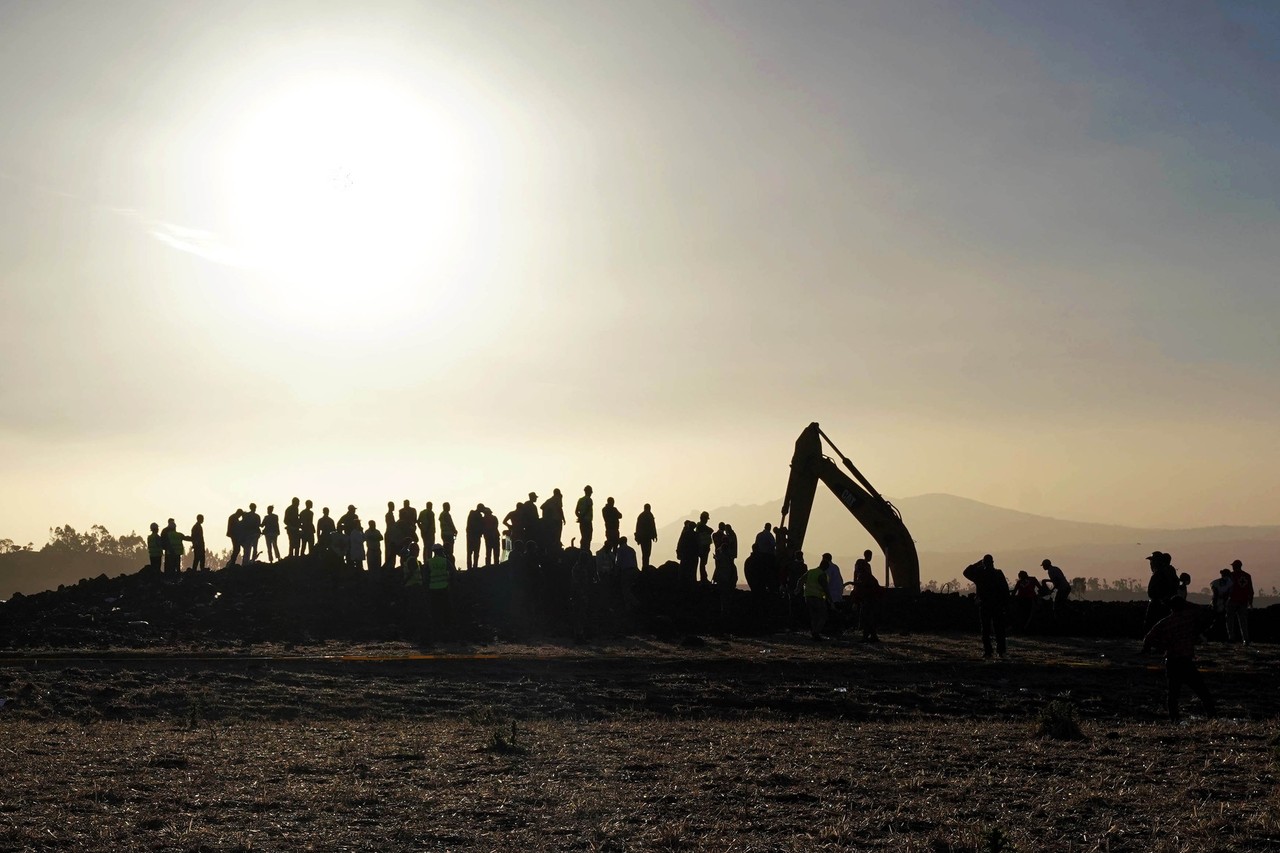 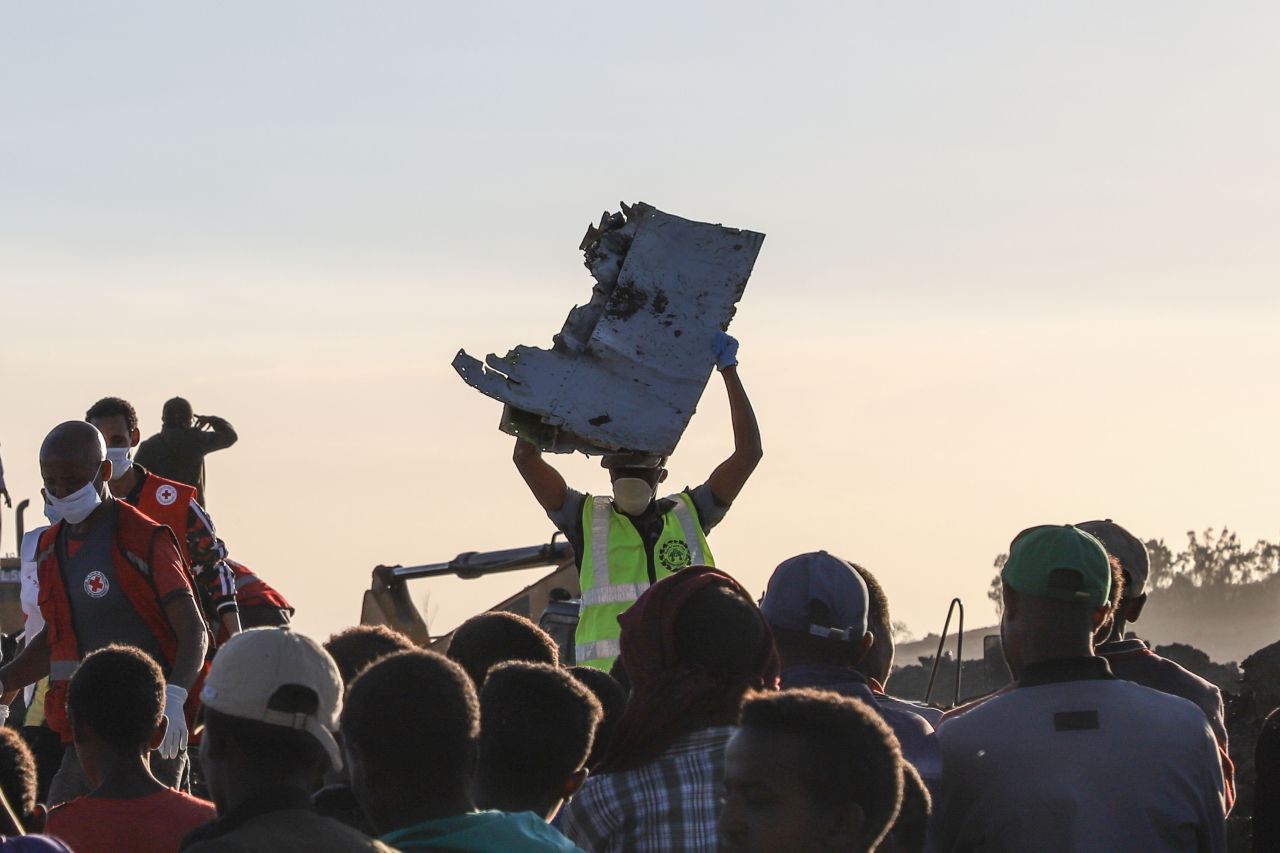 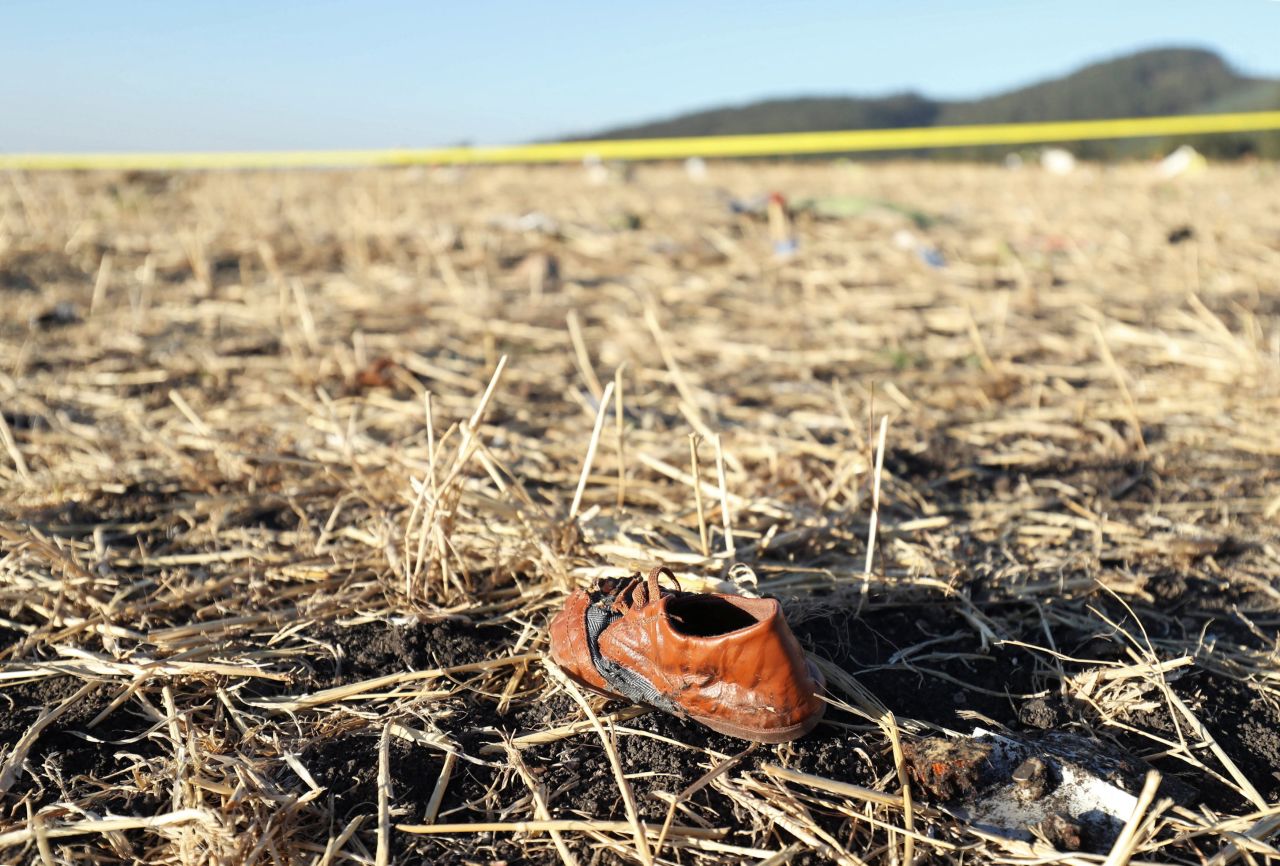 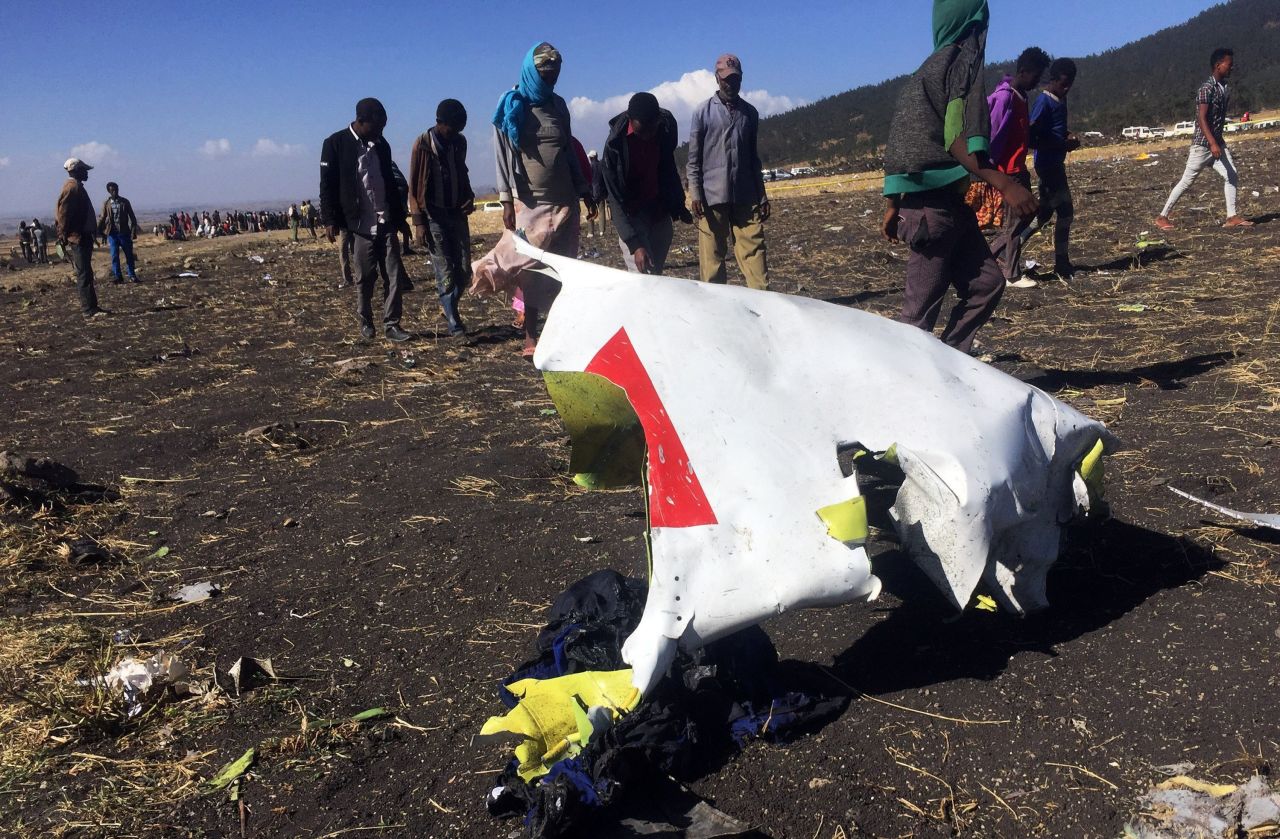 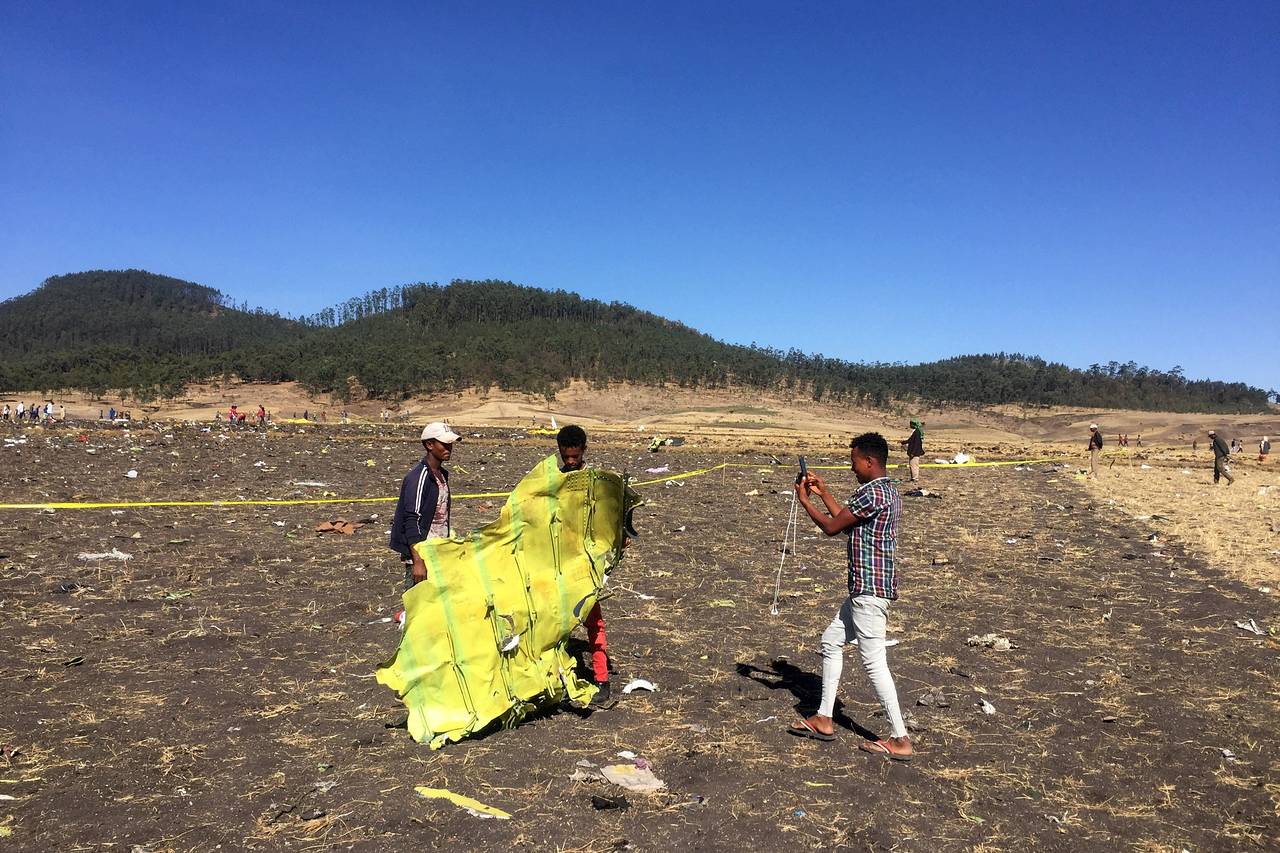 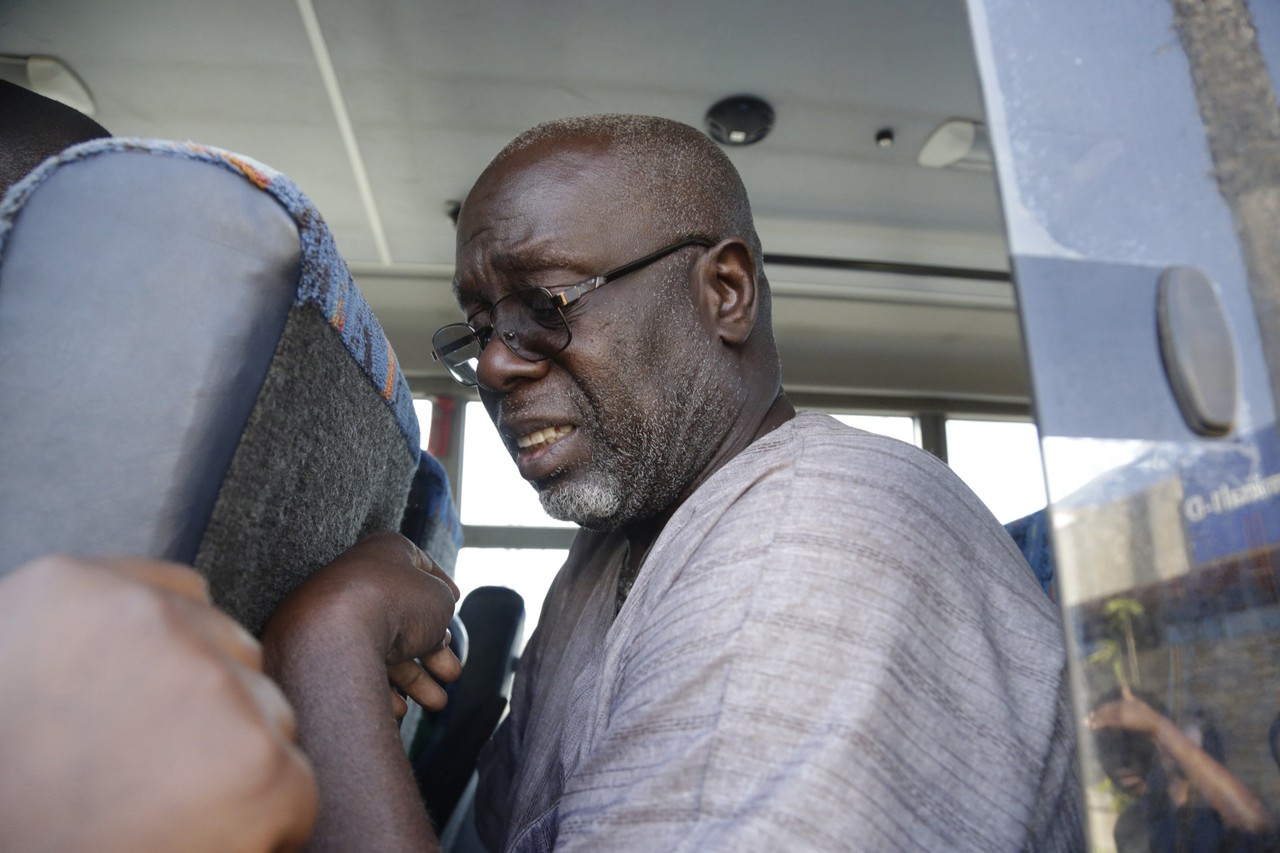 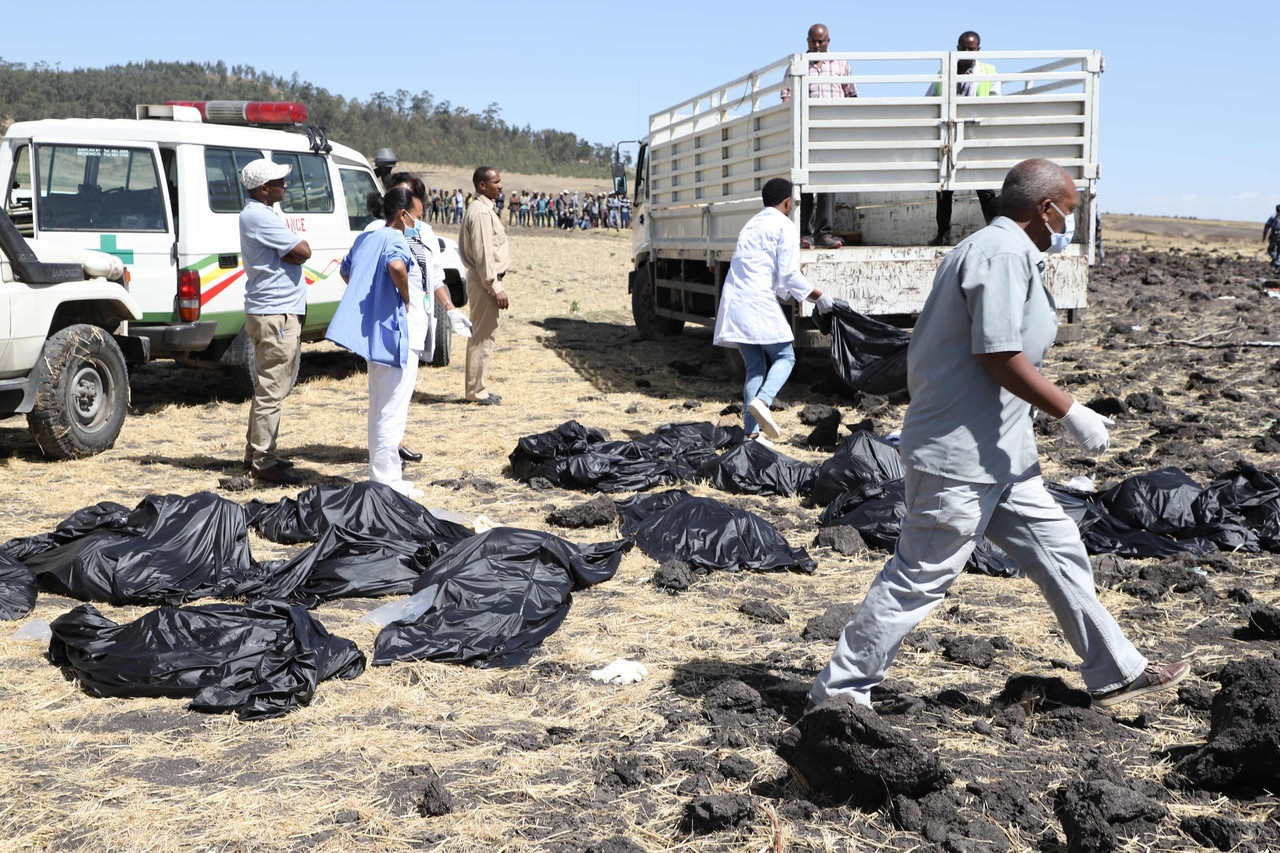 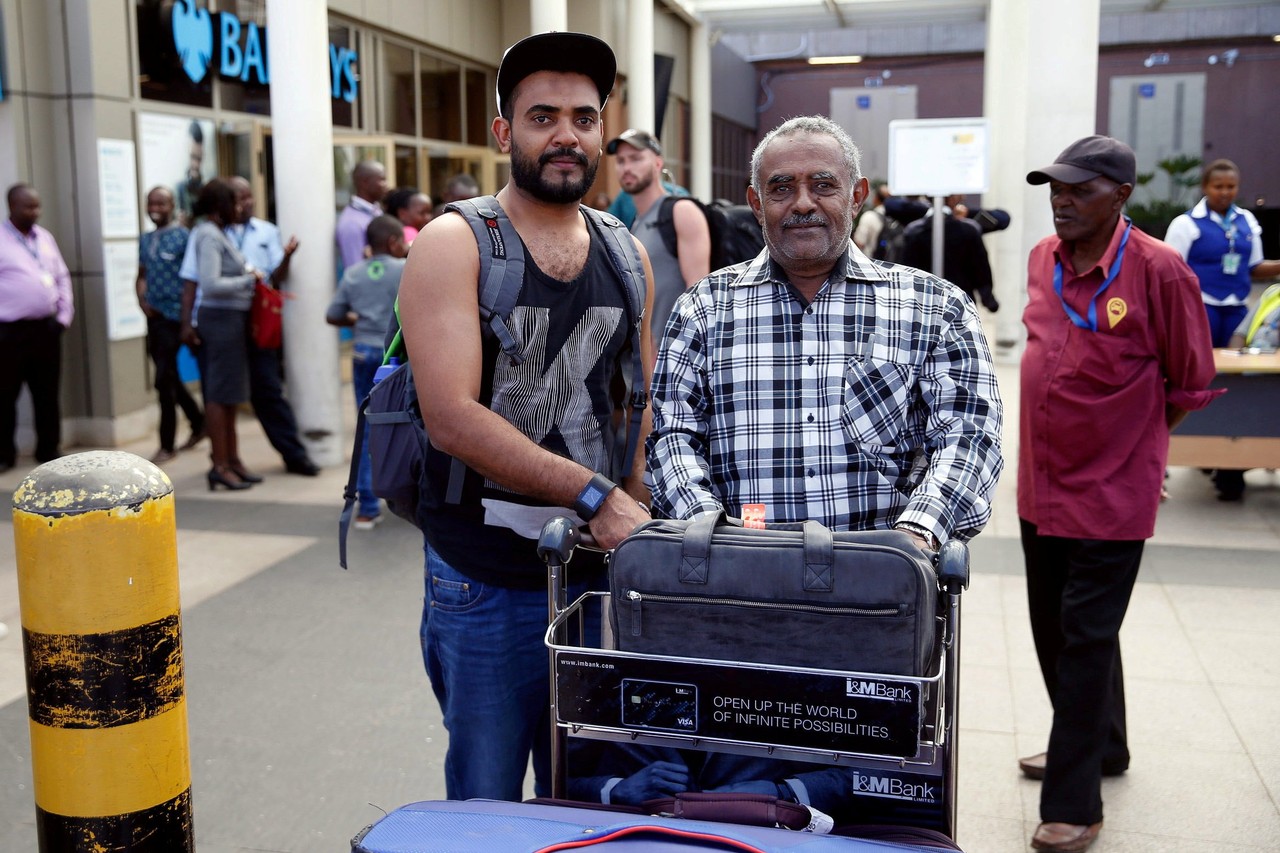 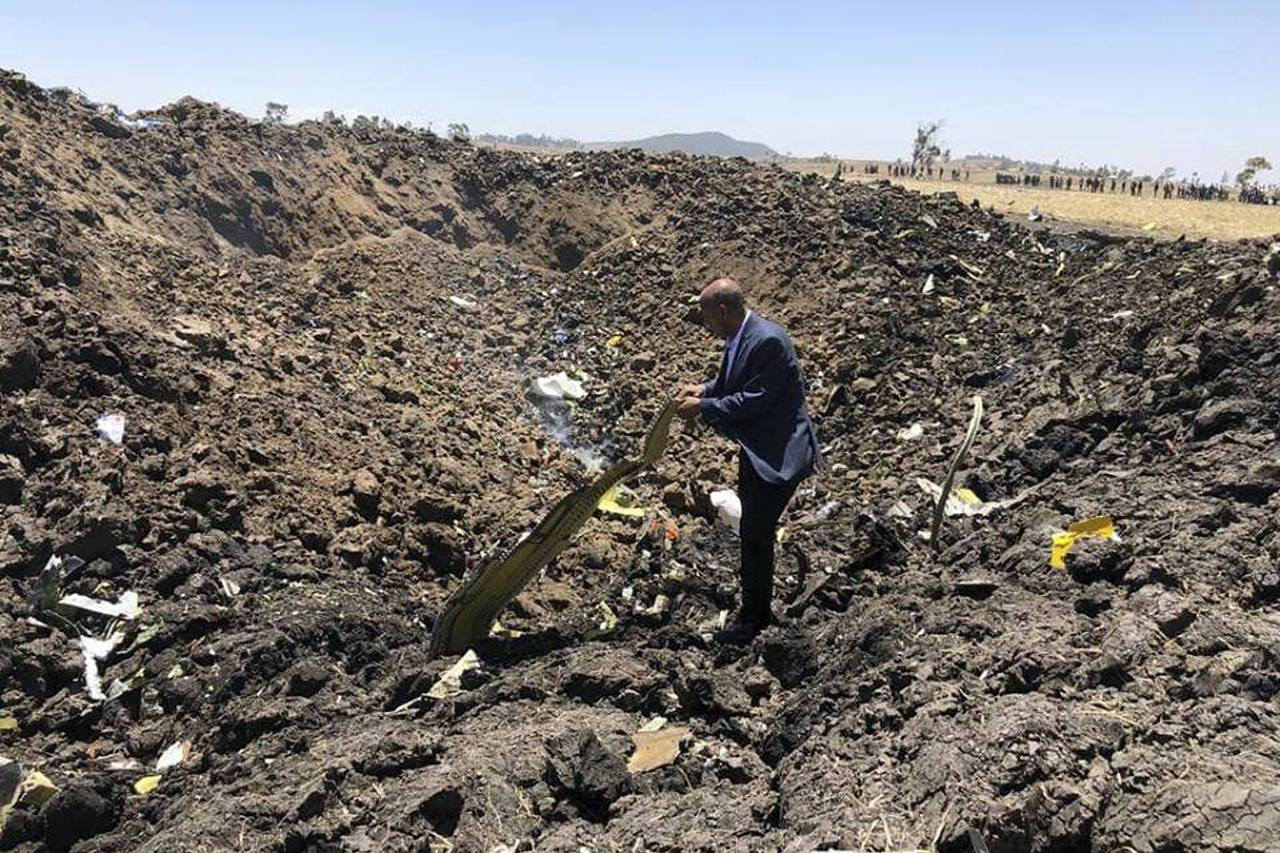 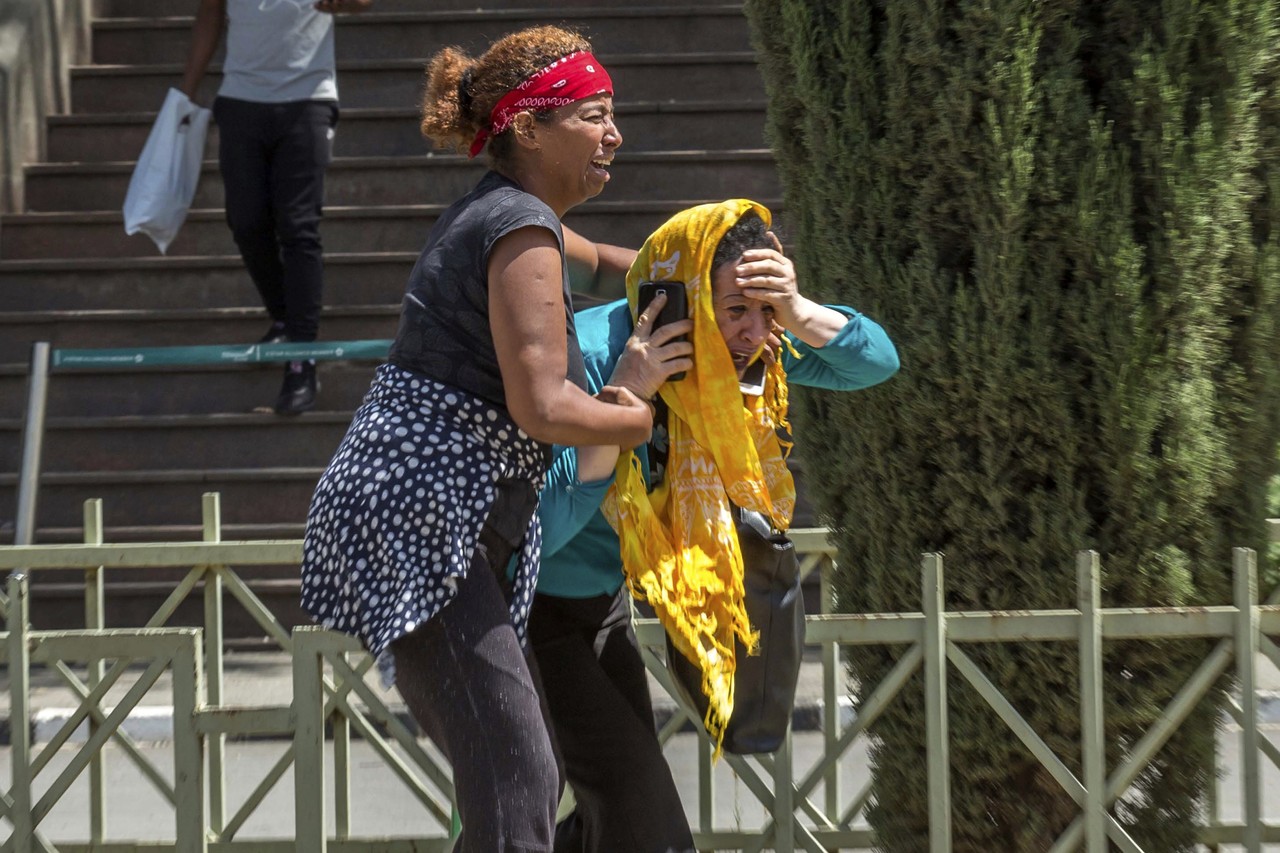 People stand near a pile of debris at the crash site near Bishoftu, a town some 60 kilometers (37 miles) southeast of Addis Ababa, Ethiopia.
MICHAEL TEWELDE/AGENCE FRANCE-PRESSE/GETTY IMAGES
1 of 15

Sunday’s accident comes weeks before Boeing and U.S. regulators are expected to release a fix for the 737 MAX’s flight-control system.

Boeing said it was deeply saddened and was dispatching a technical team to assist in the Ethiopian government-led crash probe. A spokesman said the company is also postponing a planned roll-out this week of its new wide-body 777X. Aviation industry officials cautioned it was far too soon to speculate whether there were any similarities between the Lion Air and Ethiopian Airlines crashes.

Accident investigators are still months away from determining the precise cause of the Lion Air crash. In an interim report, they said the crew battled inaccurate sensor information, a cascade of warnings and an automatic flight-control system that repeatedly pushed down the nose of the plane during the 11 minutes from takeoff until the crash.

The Lion Air accident has focused attention on a new stall-prevention system Boeing devised for the plane. Investigators also raised questions about whether proper maintenance was conducted on the system, and they examined potential pilot missteps.

The stakes are high for Boeing because the 737 MAX is its best-selling plane and backbone of future production plans. The Chicago-based plane maker has emphasized that its manuals included a procedure pilots could use to turn off the stall-prevention system, known by its acronym MCAS, and prevent it from automatically pushing the plane’s nose down. 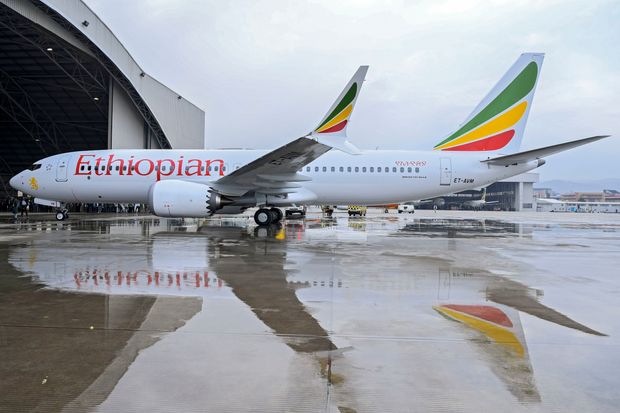 An Ethiopian Airlines Boeing 737 MAX like the one that crashed in Ethiopia on Sunday arrives at Bole International Airport in Addis Ababa on first delivery in 2018. Photo: EPA/Shutterstock

The crash comes as Boeing enjoys record revenue and profit that has helped push its shares up 31% this year. The 737 MAX 8 that crashed is among 350 of the latest models of Boeing’s new single-aisle workhorse aircraft that have been delivered as of January to carriers around the world since 2017. The 737 MAX represents about two-thirds of Boeing’s deliveries and an estimated 40% of its profits, fueled by surging global demand for air travel, according to analysts.

Approximately 5,000 more 737 MAX airplanes are on order to carriers around the world, from Dallas-based Southwest Airlines Co. to Europe’s Ryanair Holdings PLC and Vietnam’s VietJet.

Airlines that operate the MAX said they are monitoring the investigation. A spokesman for American Airlines Group Inc., which has 24 of the MAX 8 variants in its fleet, said Sunday that the airline has full confidence in the aircraft and its crew members.

A spokesman for American’s pilot union said it was “very early, but we are watching it very, very closely.” Several other major 737 MAX operators said they would continue to fly the plane as normal unless Boeing or regulators recommend changes.

Lori Bassani, president of the Association of Professional Flight Attendants, which represents American’s flight attendants, said members have asked the airline for assurances that it is safe. “I have asked for the safety concerns of our members [flight attendants] to be addressed regarding flying/working this aircraft,” she said.

A separate union representing 50,000 flight attendants at 20 airlines called on the FAA to investigate the 737 MAX 8, citing concerns from crew and passengers following a second crash “with similar characteristics to the first.”

“While it is important that we not draw conclusions without all of the facts, in the wake of a second accident, regulators, manufacturers and airlines must take steps to address concerns immediately,” the Association of Flight Attendants-CWA said in a statement.

A spokesman for the National Transportation Safety Board said the U.S. agency was sending a team of four staff members to Ethiopia to assist in the investigation.

The U.S. Federal Aviation Administration said it is closely monitoring developments, and an agency spokesman said the FAA was in touch with the U.S. State Department and plans to join the NTSB in assisting the accident probe.

After the Lion Air crash, Boeing and the FAA issued safety alerts pointing out how the system worked and how pilots can turn it off. Some airlines stepped up inspections and issued bulletins to employees, but no carrier or regulator took any steps to restrict operation of the 737 MAX.

In Indonesia, the head of the country’s accident investigation agency, which is in the process of finalizing a report on the fatal crash of the Lion Air MAX jet last October, said his team was meeting Monday to discuss whether to recommend grounding MAX planes. Flag-carrier Garuda Indonesia and low-cost airline Lion Air together fly around a dozen of the new planes, which were briefly grounded last year for ramp checks in the wake of the Lion crash. A Transportation Ministry official said the agency continues to monitor airlines flying MAX jets.

Ethiopian Airlines Chief Executive Tewolde Gebremariam said it would be left to investigators to determine the cause of the crash and whether there is any link between the latest incident and Lion Air’s. 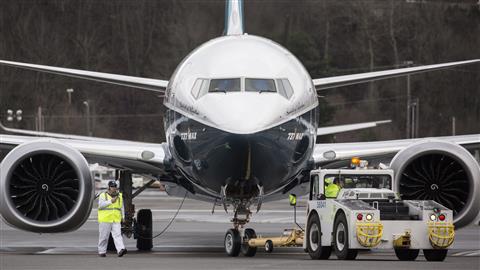 The system that helps prevent Boeing’s new 737 Max 8 plane from stalling is potentially linked to the fatal Lion Air jet crash in Indonesia. WSJ’s Robert Wall explains what we know about the safety feature. Image: Getty

U.S. air-safety experts monitoring crash developments said it is too early to draw conclusions, adding that the preliminary speed and altitude information could result from a variety of causes. Among the first questions investigators are likely to focus on, according to some of these experts, are engine performance and if the plane was being flown manually or on autopilot.

The aircraft had no reported problems and had arrived in Addis Ababa on Sunday morning from Johannesburg. It had undergone routine major maintenance checks on Feb. 4, Kenya’s Mr. Macharia said.

The plane that crashed had logged more than 1,200 flight hours, Mr. Gebremariam said. A senior pilot with more than 8,000 flight hours experience and “an excellent flying record” was in command, he said.

Apart from Boeing, the crash also puts a spotlight on Ethiopian Airlines. The rapidly expanding carrier has enjoyed a relatively good safety record, particularly in recent years. It has been a standout in Africa, buying lots of new planes—including Boeing 787 Dreamliners and the Airbus SE A350 long-haul plane—and hiring top-flight pilots.

The airline has been pushing hard to elevate its international reputation, positioning itself as an alternative to luxury Middle East carriers like Emirates Airline and trying to turn itself into a major link between Africa and the rest of the world. Underscoring the high regard it enjoys among Western airlines, it is a code-share partner of United Continental Holdings Inc., the Chicago-based U.S. airline. Both are members of the Star Alliance.

Ethiopian placed its 737 MAX 8 order in 2014. Mr. Gebremariam said it was part of a plan to turn Ethiopian into the leading airline group in Africa.

The crash is the worst for Ethiopian Airlines, topping the 125 lives lost in a hijacking in 1996, according to Aviation Safety Network data. The carrier’s latest fatal accident occurred nine years ago, when a Boeing 737-800 crashed near Beirut, killing all 90 people on the aircraft. Accident investigators said the crew lost control of the plane.

The airline is state-owned, but Prime Minister Abiy Ahmed last year said he intended to partly privatize the airline in a push to liberalize key state assets, alongside other major state-owned enterprises.

Corrections & Amplifications
Kenya’s Transport Minister is James Macharia. An earlier version of this article incorrectly stated he was the transport minister of Ethiopia. Also, a photo with this article shows an airplane like the one that crashed Sunday in July; a caption that appeared with an earlier version incorrectly said the photo showed the plane that crashed Sunday.