When most people tune in to their local TV news station, they’re used to learning whether it’s going to rain tomorrow from the trusted, familiar voice of their favorite TV meteorologist or weathercaster.

Increasingly, those viewers are also learning about the effects of climate change in their own communities from those same trusted voices.
It was once thought to be a topic to be avoided, but many on TV have become emboldened to talk about this subject as their own understanding has evolved.
Ed Maibach, director of George Mason University’s Center for Climate Change Communication, has surveyed TV weathercasters since 2010 on their opinions on climate change, as well as the incorporation of the topic into their broadcasts.
His results show a dramatic shift in the past 10 years.

Record number of Americans ‘very worried’ about climate change, report finds
In 2010, the broadcast community was split right down the middle: Fifty percent of those surveyed were convinced that humans were causing climate change, and 50% weren’t. Of the half who weren’t, most acknowledged that the climate is changing, they just didn’t see the human connection.
What Maibach found most disturbing, however, was that a significant amount, roughly 20%, didn’t even acknowledge that the climate was changing.
In his most recent survey, conducted in 2017, that number has dropped, and now 95% of broadcasters believe that the climate is changing.
Additionally, 85% of those surveyed see humans as the cause.

Getting local with global warming

What changed?
Maibach points to an initiative launched in 2010 by Climate Central, a nonprofit news organization of scientists and journalists who research and reports on climate change, called Climate Matters. As an academic researcher, Maibach partners with Climate Central on the project, tracking the use of the materials and investigating their effectiveness.
The program provided weathercasters with tools they previously lacked: localized climate data tailored to a specific TV market.
Jim Gandy, a local TV meteorologist in the deep red state of South Carolina, launched the pilot Climate Matters project, and Maibach gauged the success of the program by surveying viewers from Gandy’s and competitors’ stations.
“We found that the more viewers watched Jim’s station, the more likely their views on climate change evolved,” Maibach said.
“They recognized that it was happening, and it was happening to them locally. Those results gave us confidence to know that when broadcast meteorologists talked to their audiences about climate change, it helped viewers understand that this is real and it’s impacting them.”
Gandy strives to avoid the politics and stick to the facts of the science.
“When you tell people that this is the fifth hottest summer on record, they kind of look at you like, ‘really?’ “
Gandy has been tracking trends in his state and noticed something that really got his attention. “In heat waves of the past, it may have been blazing hot in the daytime; at least you got a little bit of relief at night. You’re not getting any relief at night here now.” 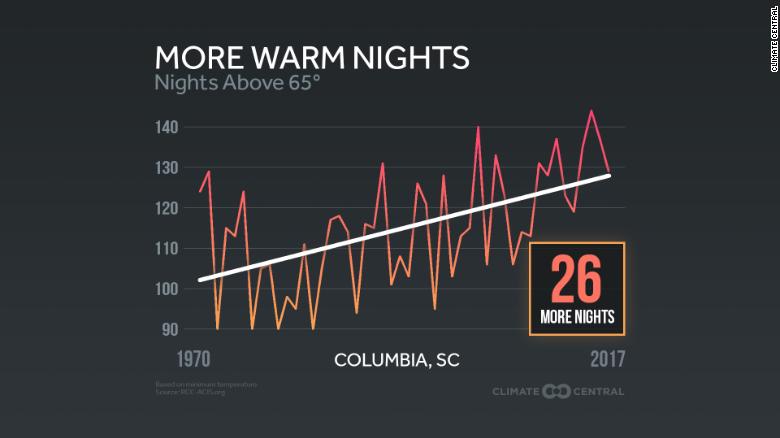 A graphic provided to local TV weathercasters by Climate Central’s Climate Matters program.
He rightly reasoned that lack of warmth overnight was connected to higher humidity due to a generally warmer climate. That warmer atmosphere allows for the capture of more moisture, a connection he was able to point out to his viewers.
Though summer’s heat might be dismissed by some, even when confronted by the temperature facts, Gandy points to other signs that are harder to dismiss, such as things viewers have probably experienced.
“People complain about the weeds in our yards because they’re growing faster these days. Why is that? Not because I’m fertilizing the yard. We’re seeing more evasive species coming into this area. Why? Because our climate is getting warmer, and you know, you can deny climate change until you’re blue in the face, but you can’t deny reality.”

Research is backing up the conclusion that viewers react positively to climate change information being presented by TV weathercasters.
According to a study released this month by researchers at George Mason University, 70% of viewers surveyed were interested in learning about climate change from TV segments. Even among those who identified themselves as unconvinced about climate change, a majority were open to seeing climate change information tailored to their locality.
The public’s appetite for climate information is being noticed by local TV weathercasters.
In 2005, when Ryan Hanrahan took a position as a meteorologist with the NBC affiliate in Hartford, Connecticut, he was not focused on climate change.
“It wasn’t so much that I didn’t believe it was happening, but rather, I saw my job as telling people what to wear tomorrow, the chance of thunderstorms and to track hurricanes.” In fact, he says, he shied away from talking about it for the first five years at the station.
But now, he’s seeing a different trend: viewers posing more climate questions.
“This summer, for instance, we had three tornadoes within the span of a few weeks, and I saw comments on social media asking, ‘Why aren’t you talking about the link with climate change?’ “
His outreach is also an attempt to meet viewers where they are and address practical concerns.
“I think a lot of people are really curious and need someone to distill what seems like an abstract science and tell them ‘how is this going to affect my backyard? How is this going to affect my property values? Am I going to be placed into a flood zone?’ “
Thanks to materials from Climate Matters, Hanrahan is able to provide that kind of localized data and help viewers understand what it means for them.
The success of local TV weathercasters like Gandy and Hanrahan has allowed Maibach to secure additional funding from the National Science Foundation to expand the Climate Matters program, and as a result, he has seen exponential growth in the number of broadcasters incorporating climate change into their presentations.
“By 2014, we had 100 meteorologists using the materials,” Maibach said. “From there, we went to 300 in 2016, and now we’re almost at 600.”
But the growth in red states has really surprised him.
“We’re doing very well in Texas, which is a deep red state, and Florida, which leans red,” Maibach said.
“From what I’ve seen, broadcasters in red states are being pretty fearless. They’re getting the job done, and they’re not shying away from the truth. And I think that’s a really good story to tell.”
Original Article:https://www.cnn.com/2019/03/08/us/climate-change-tv-weathercaster/index.html
Read More:Hilarious Weatherman Fakes Florence Strenth As Teens Walk Behind Him- Blowing Charade
Read More:Globalists Desperately Launch New Climate Change Group With Former Obama Energy Secretary
Read More:UN Secretary General: Use ‘Climate Action’ To ‘Transform The World’
Read More:Going Into Over-Drive: Climate Change Agenda In The Media
Read More:Pope Implies During UN Speech That Climate Change Deniers Are ‘Perverts’ Who ‘Endanger Humanity’
Read More:Climate Change Agenda Openly Exposed: Pope Demands ‘One World Government’ To Combat ‘Climate Change’