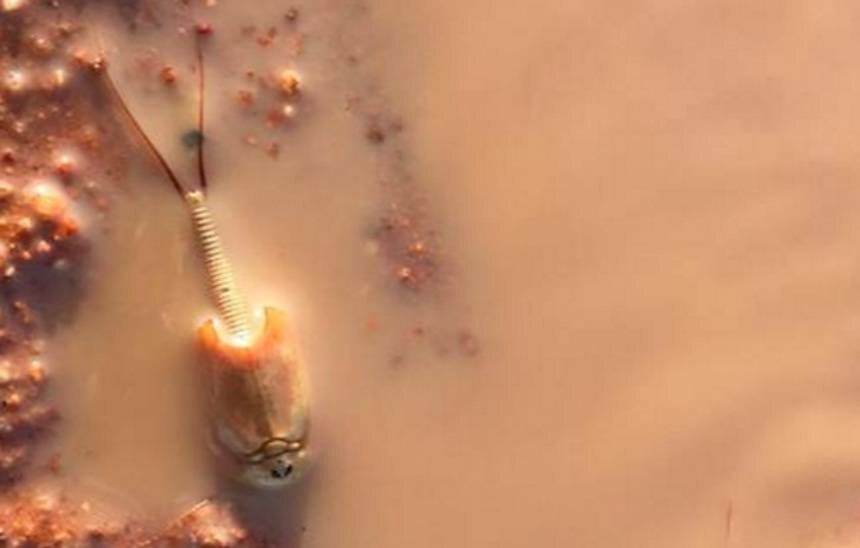 Imagine millions of these slithering out from the mud? The eggs of this alien desert crustacean remain dormant for years, waiting for a bout of rain to hatch.

In the desert of Australia – land of all creatures wonderful and weird – dwells a remnant of prehistoric time, a crustacean known as a shield shrimp.

Triops australiensis, which looks like the love child of a horseshoe crab and a creature from the far side of the universe, belongs to a group of crustaceans called “branchiopods,” meaning “gill feet” – because they have leaf-like, lobed feet, each housing a handy gill plate with which they breathe.

And while truly odd by our human standards, this is a fascinating organism, with eggs beautifully adapted to its environment. Given the dearth of water, the eggs can stay dormant underground for up to seven years or so, patiently waiting for enough rain to hatch – at which point millions of the little guys bloom from the mud.

Recently, a man named Nick Morgan posted some photos on the Northern Territory Parks and WildlifeFacebook page seeking an answer to what the heck he was seeing:

Parks and Wildlife follower Nick Morgan sent in these photos of a mysterious bug he encountered near Alice Springs. It’s a type of crustacean known as a Shield Shrimp, and there is one species in Australia, Triops australiensis.

The shrimp are well adapted to desert conditions as their eggs will remain dormant for years until there is significant rain, which triggers a population explosion.

Now is the best time to see the Shield Shrimp as the recent heavy rain in the Central Australia region has brought them to life.

“They can turn up in the absolute millions upon millions,” expert Michael Barritt tells ABC Radio Darwin. But don’t let the name fool you. “They’re not a true shrimp,” he adds.

After feasting and laying new eggs before the arid desert conditions return, the species paves the way for the next flood-sparked generation, having adapted beautifully to its habitat.

“Forget about your average egg,” Barritt says. “These are eggs that can dry out and get blown by the wind. They deal with all the kinds of extreme temperatures that inland Australia gets, including high temperatures and low temperatures at night in wintertime.”

It may not be a very illustrious life apart from that one watery hurrah, but seeing as how they come from a family that has been around for 350 million years, they may be having the last laugh.