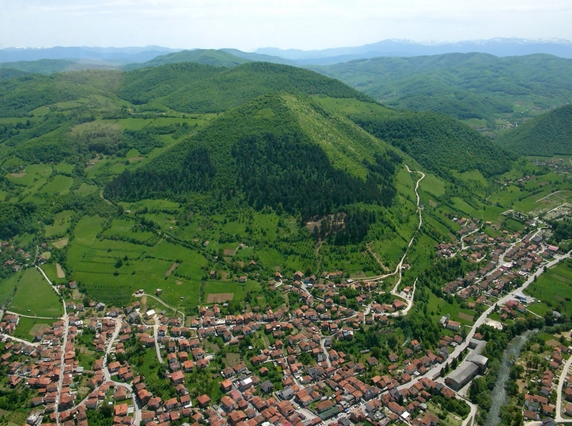 A mysterious pyramid-like structure has been found on the ocean floor, and now theories are being bandied about regarding what the underwater object could be. Marcelo Igazusta of Argentina found the structure in the Pacific Ocean to the west of Mexico while exploring on Google Earth.

While Igazusta suspects it is an alien UFO that was left underwater, others speculate it could be part of an ancient sunken city. In video commentary posted to YouTube, it is described as being an “intense light” that is shaped similarly to a plane.

Its proximity to ancient Aztec and Mayan pyramids could be a clue, but at 8.5 miles, it would be the biggest pyramid found in the world and something many believe humans would have been unlikely to be able to build. Of course, without actually exploring it, there is no saying for certain whether it’s something manmade or simply a natural geographic feature of the earth.

It’s not the first time that Google Earth has revealed structures that inspired some animated debate and conspiracy theories. Last year, a pair of pyramid-like structures were discovered in the Atlantic Ocean.

The structures appear in a video posted by SecureTeam10, a group that has come under fire for its conspiracy videos, with many questioning their veracity. Contributor Scott Waring said he was looking at the ocean floor on Google Earth when he found the unusual shapes near New Providence Island. He says that the lines on the pyramid are clear and prove that Aztec-like people once lived there.

The video says that the ocean is better at preserving things from problems like rust, so it stands to reason that if they are pyramids, they could be older than the ruins we’ve already found on Earth.

The two pyramids do not appear to be the same. One of them looks like a perfect three-sided object, while the other one features a step-like design that is not unlike Mayan temples such as the Chichen Itza.

While nobody knows what these structures are, recent groundbreaking research has given much more concrete evidence of previously unknown Mayan structures existing under thick foliage in the Guatemalan jungle.

Using laser technology to gain a glimpse of what exists under the forest canopy in Peten, researchers found more than 60,000 Mayan structures including palaces, causeways, and pyramids. This discovery indicates that the civilization was more advanced than ancient Chinese and Greek cultures at its peak.

Advanced terracing and irrigation systems were found, as were raised highways that linked urban centers with quarries. Other findings include homes, ceremonial centers, and sidewalks.

It is believed that as many as 15 million people lived in the area, and the defensive walls and fortresses surrounding it suggest that theirs was a lifestyle replete with warfare.

The discovery was made using aircraft equipped with a LIDAR scanner, which made three-dimensional maps of the area’s surface using pulsed laser light that was linked to a GPS system.

The pyramid they discovered among these structures is nearly 100 feet tall and was previously believed to be a small mountain, illustrating how modern technology can give rise not only to conspiracies and speculation but also legitimate evidence of what happened on our planet many years ago.

Read More:Pyramid Discovered In Dense Jungle In Indonesia- Could Be Oldest Ever Found

Read More:Secret Passage Unearthed Beneath Mexico’s ‘Pyramid Of The Sun’