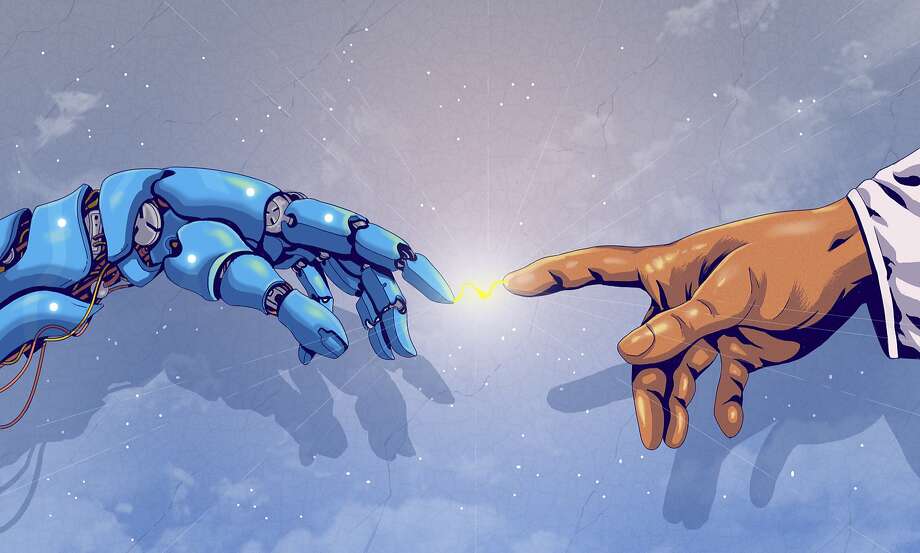 The drive through window is often considered the most harrowing assignment inside a fast-food restaurant.

A nonstop whirlwind of multitasking, the gig involves organizing multiple orders, communicating with the kitchen, counting money and negotiating with an endless stream of customers who range from polite and coherent to angry and inebriated — all for a minimum wage reward.

If that juggling act wasn’t hard enough, a giant timer hangs in many drive through kitchens, adding urgency to each task, former workers say.

Though the drive through gantlet has broken many a fast food worker, the newest employee at Good Times Burgers & Frozen Custard in Denver will not be feeling the heat anytime soon. That’s because she’s an artificially intelligent voice assistant — emotion-free and immune to stress — with the ability to operate a drive through window without fatigue, bathroom breaks or compensation.

She fills a classically American job nearly a century in the making, a rite of passage for generations of teenagers that could be in the very early stages of a mass extinction. But first Rob Carpenter, the CEO and founder of Valyant AI, an artificial intelligence company that designed the customer service platform, will have to prove that his model works as well as he says it does.

The AI assistant has endured months of testing, but officially began handling the restaurant’s breakfast orders at last week. If the fledgling assistant runs into any technical issues, the transaction is handed off to a human employee inside the restaurant.

“The system takes a lot of friction out of interactions between customers and employees,” Carpenter said, noting that the AI was designed to sound like an amiable woman’s voice. “The AI never gets offended and it will just keep talking to you in a very calm and friendly voice.”

There’s an immediate benefit for employees as well, Carpenter maintains.

“Over the course of an eight-hour shift, they don’t have to repeat the same welcome language hundreds of times,” he said.

Intelligent, interactive machines, once the stuff of sci-fi movies and futuristic fantasy, are quickly becoming a reality, especially in the fast food dining world, where repetition rules and improvisation is limited. In restaurants around the globe, machines are already taking orders, flipping burgers, preparing pizzas, pouring stiff drinks and cooking entire meals in full view of hungry customers.

Fast food restaurants like Starbucks, Wendy’s, Panera and McDonald’s encourage customers to order using self-service kiosks or a mobile app. But Valyant AI appears to be one of the first companies to create a platform for taking orders via an interactive AI voice assistant – one who also happens to be the first company representative many customers will encounter.

Carpenter said the assistant’s conversational cadence — which sounds like a more fluid version of Amazon’s Alexa — was designed to replicate human interactions, with limited pauses and a menu-based script that varies depending on the exchange.

In a video demonstrating the AI assistant, a woman’s voice can be heard saying:

When man in the video asks for a breakfast burrito, the robot describes two different types and burritos and asks which one he would like. After discussing specific details of the order and asking whether he wants a drink or a combo meal, the voice assistant confirms the order one last time.

“Thank you, please pull forward to the window,” the voice says, concluding the interaction.

Other companies are pitching similar technology to McDonald’s and Taco Bell, as well as several major banks, according to TechCrunch.

The technology arrives at a time that fast food customers are seeking even more quickness and convenience, Carpenter said. He pointed to a recent study from QSR Magazine that found that 70 percent of fast food restaurant sales now occur at the drive-through window, a number that has led to an increase in traffic and wait times for food.

Customers waited an average of 234 seconds for their burger and fries in 2018, compared with about 225 seconds the year before, according to QSR. Wendy’s holds the record for the shortest wait time, a blazing 116 seconds, which was set in 2003, the magazine reported.

With more vehicles creating drive through into traffic jams, Carpenter said his company’s voice assistant was designed to increase the speed of service. Instead of one employee managing multiple drive through lanes, which is often the case, he said, employees can focus on preparing food and processing payment. Longer lines mean potential customers will look for another restaurant, he said.

“It’s really designed to be a helper for employees,” Carpenter said. “Two weeks ago we had a blizzard in Denver and one employee couldn’t make it, but the employees were able to turn on the AI system so they weren’t falling behind. They were extremely appreciative and really liked getting that assistance and help.”

But critics claim tools like Carpenter’s assistant will ultimately harm more workers than it helps. Erikka Knuti — communications director for the United Food and Commercial Workers Union — said too many businesses treat customer service as a line item cost instead of an investment. In addition to eliminating jobs, she said, removing people from transactions degrades the product businesses are selling.

“Retailers and businesses underestimate the importance of the customer service interaction — that point when a customer hands over their money and they get a warm smile in return that tells them they’re valued,” she said.

“These companies are saying, ‘We don’t care about you and we don’t care if you’re getting better service,'” she said. “They’ll say it’s more efficient, but I don’t know any situation where somebody said, ‘I’m really glad that there wasn’t somebody there at customer service or checkout when I needed help.”

“Its like stripping the vitamins out of food and selling it to people like its nutritious,” she added.

Carpenter thinks widespread automation inside restaurants is inevitable and will eventually create a two-tiered restaurant experience. Customers seeking convenient fast food options will wind up at restaurants staffed primarily by machines. But those seeking slower, more high end dining options will end up at establishments staffed by human employees.

“These trends are about giving the customer more choice,” he said.