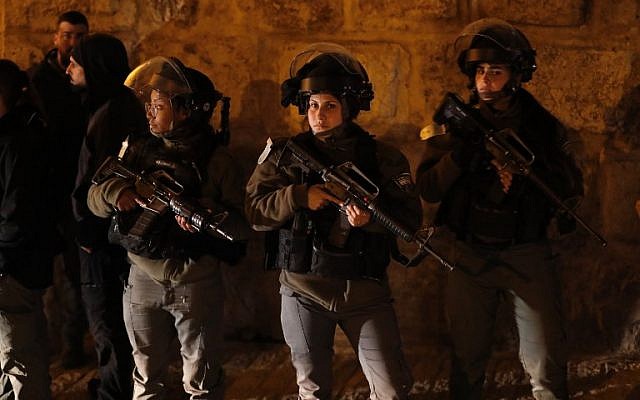 Security forces were gearing up Friday morning for anticipated violence ahead of Friday prayers at Jerusalem’s Temple Mount as police announced 60 people were arrested overnight on suspicion of planning violence.

The Kan public broadcaster reported the arrested individuals were all residents of East Jerusalem.

A spokesman for the police said the crackdown came after “calls for public disturbances” at Friday prayers.

Police said in a statement they expect to make further arrests in the coming hours, and that they would act to ensure prayers could take place as planned.

Palestinian worshipers clashed with Israeli police at the site on Tuesday, trying to force their way into an area of the holy compound that has been closed for years. Police said 19 Palestinians were arrested.

The incident followed a similar confrontation on Monday in which Palestinians tried to break the gate that Israel placed on the closed area last week after the Muslim Waqf religious council broke into the area and held prayers there. 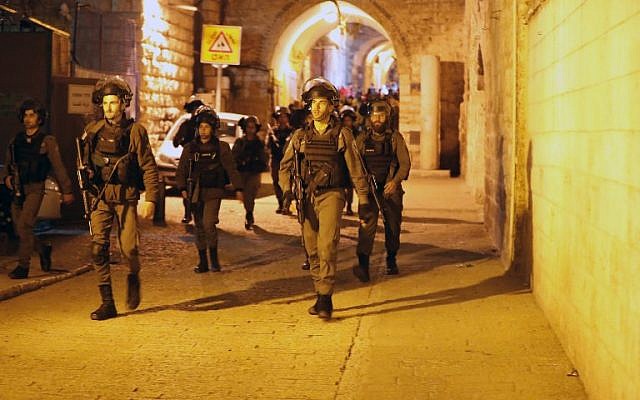 Border Police patrol near an entrance to the Temple Mount compound in Jerusalem’s Old City, on February 19, 2019. (Ahmad Gharabli/AFP)

Palestinian medics reported that several protesters were injured in the standoff.

The Gate of Mercy, or Golden Gate, on the eastern side of the Temple Mount, was sealed by Israeli authorities in 2003 because the group managing the area had ties to Hamas, and it has been kept closed to stop illegal construction work there by the Waqf, which Israeli officials believe has led to the destruction of antiquities from periods of Jewish presence in the area.

Israeli police responded by summoning the head of the Waqf, Sheikh Azzam al-Khatib al-Tamimi, for questioning, but the summons was later canceled, apparently following pressure from Jordan, according to the Haaretz daily.

The closure drew an angry rebuke from Amman, with a letter from the Jordanian foreign ministry to its Israeli counterpart calling the closure a violation of the status quo and demanding the reopening of the gates and the removal of all Israeli security forces.

In an English-language statement on Tuesday, the office of Palestinian Authority President Mahmoud Abbas accused Israel of attempting to impose a “division” of the mosque compound. 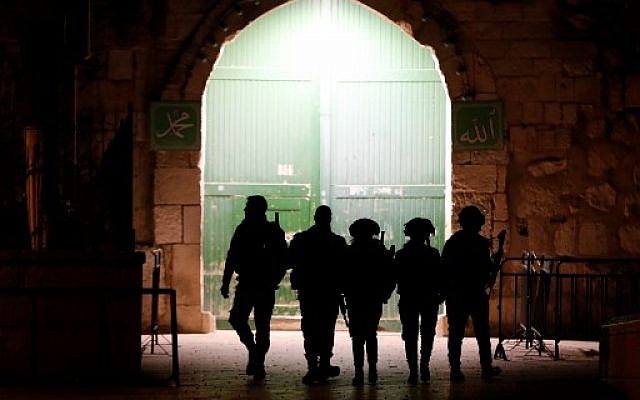 According to Haaretz, the Jordanian government, which controls the Waqf, enlarged its council from 11 to 18 members last week. For the first time, Palestinian Authority officials and religious leaders were installed in the body, which has historically been made up of individuals close to the Jordanian monarchy.

The change is a bid by Amman to begin to share responsibility for the holy site, the location of the biblical Jewish Temples, and now of the Al-Aqsa Mosque and Dome of the Rock shrine, which in recent years has become an epicenter of tensions between Israelis and Palestinians.

The newspaper said the ongoing tensions at the site are part of the reason for the expansion of the Waqf council by Jordan. Amman first considered the move in the wake of violent protests that followed a terror attack in which Palestinian gunmen killed Israeli police officers guarding the Temple Mount in mid-2017. 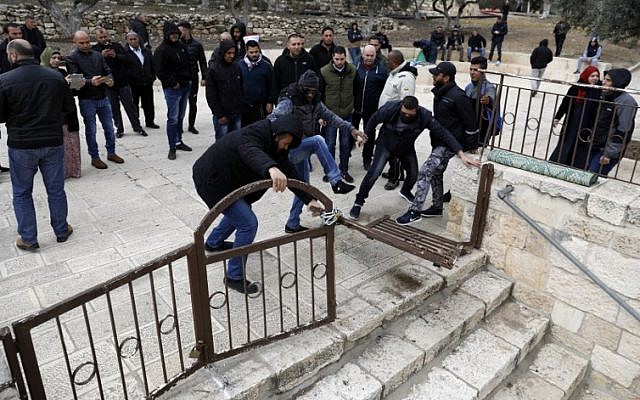 Israel installed metal detectors at the compound’s entrances following that attack, triggering weeks of protests by Palestinians. Prime Minister Benjamin Netanyahu finally ordered the detectors removed after regional allies warned that the fight over the holy site was strengthening the hands of Islamist factions throughout the region.

Jordan believes its influence at the Temple Mount was eroded by those events, while Palestinian leaders who led the protests saw their influence grow.

Palestinian fears about purported Israeli plans to change the 52-year arrangement on the Temple Mount — where the Waqf maintains administrative control and the Israel Police security control — have become a daily staple in Palestinian political rhetoric and media reports in recent years. Multiple car-rammings, stabbings and shootings have been attributed by Palestinian attackers to the alleged efforts by Israel to alter the status quo at the site, according to which Jews may visit but not pray there.

Read More:Sign THe Third Temple Is About To Be Rebuilt? Unique Precious Stone Found In Carmel