Origin of the Name

The name “Molech” or “Moloch” most likely comes from the Hebrew word Melekh, meaning king. For a long time, it was believed that Moloch was another name for Milcom, the chief deity of the Ammonites, but this view has fallen out of favor because of more recent research.
The name of Molech was most likely a title or epithet for a deity rather than an actual name. It is common in Phoenician and Canaanite inscriptions for deities to be referred to as king of something. Malkandros, another name for El, the head of the Canaanite pantheon, for example, translates to “King of Man.” 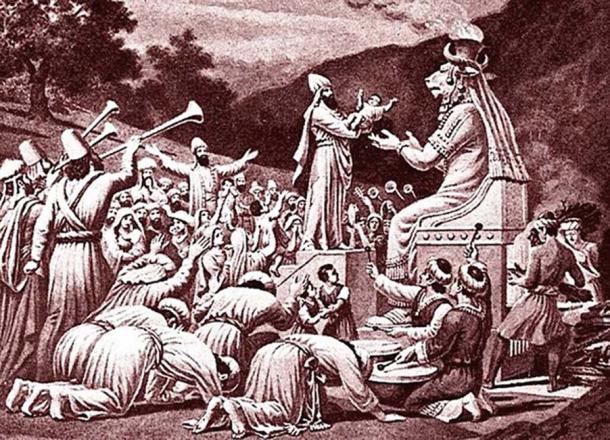 One suggested identity for Molech is the Canaanite deity, Ba’al-Hadad or Hadad. Hadad was considered the king of the gods by the ancient Canaanites. Evidence that Moloch can be identified with him comes from the fact that the pagan alters in the valley of Ben-Hinnom where children were sacrificed are also described as altars to Ba’al by the prophet Jeremiah. Furthermore, Assyrian texts state that child sacrifices were made to Adad, the Assyrian equivalent of the Canaanite Hadad. This makes it reasonable to suggest that child sacrifices may have also been made to Hadad and that a cult of child sacrifice may have been related to him. 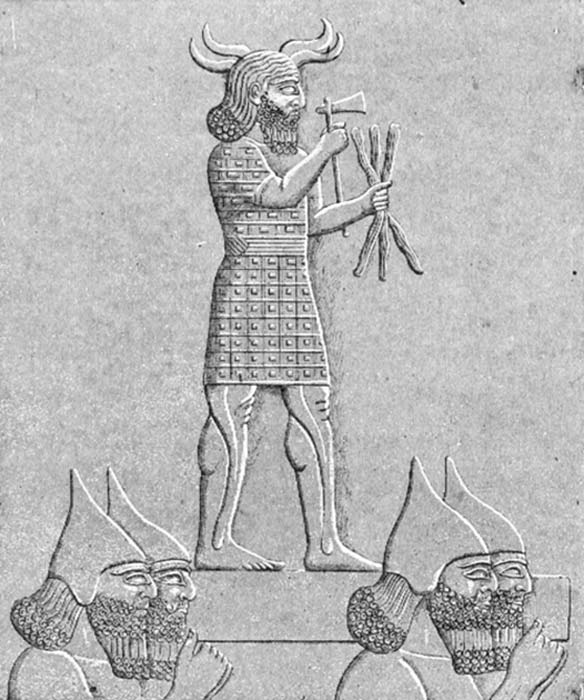 In the Biblical account, children are said to have been sacrificed or “passed through the fire” to Moloch at a shrine outside the city walls of Jerusalem called Topheth, in the valley of Ben-Hinnom. Although it is most likely that this practice was due to the introduction of a foreign deity, it has also been suggested that the Judahites believed that that they were making sacrifices to Yahweh, the national deity of the ancient Judahites and Israelites. Either way, the prophets harshly condemn this practice as being offensive to Yahweh whether it be a corruption of Yahweh worship or worship of a foreign deity such as Ba’al-Hadad.

The practice of child sacrifice is attested in other sources throughout the ancient Mediterranean world, particularly in Carthage. In the city, a sacred grove and a temple were dedicated to one such cult. 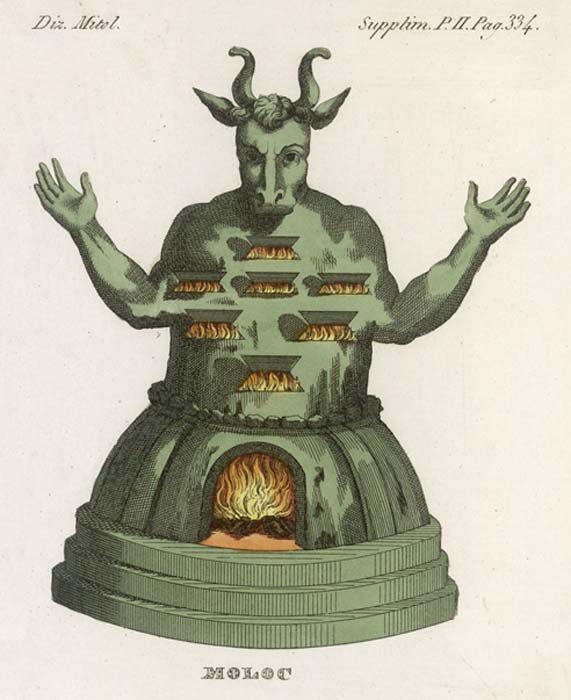 On the other hand, it is isn’t necessarily clear from the Biblical text that child sacrifice was as regular as it has been suggested in the cult of Moloch. The cult of Moloch may also have only involved sacrifice of children in times of crisis, or it may have occurred only on special occasions such as annual festivals or at the birth of a first-born child. These practices are attested in other parts of the ancient Mediterranean. As a result, there isn’t necessarily a reason to think that one cult involved regular sacrifices while the other one did not.

Another major point of contention in the study of Moloch is whether or not children were sacrificed at all. Some scholars as well as ancient Rabbis have suggested that “pass through the fire” meant passing between rows of fire in an initiation rite. In this view, the “abomination of Moloch” condemned by the Hebrew prophets was Jewish children being initiated into paganism. Thus, children were not actually sacrificed at all and it was the initiation ceremony that alarmed the prophets.

There are some problems with this view, however. Although there are some cases where the text could be referring to something like this initiation rite, there are also cases where passing through fire is clearly referring to burning. Furthermore, ancient Near Eastern texts give good reason to believe that actual child sacrifice occurred.

There is a lot of uncertainty regarding Moloch, though a few things can be said with relative confidence. It is clear from Biblical and ancient Near Eastern sources that Moloch was probably a title or epithet used for a prominent Canaanite deity to whom children were at least occasionally sacrificed. This deity was either a foreign deity or he may have been a mischaracterization of Yahweh himself, though this is one of the less likely explanations. Beyond this, there is still much to learn.

Read More:Temple Of Baal To Be Erected In Times Square This Summer

Read More:Temple Of Baal Unveiled In London Yesterday, With One Last Minute Change

Read More:‘Arch Of Baal’ Was Erected In Washington Days Ago, Just Before Congressional Hearings