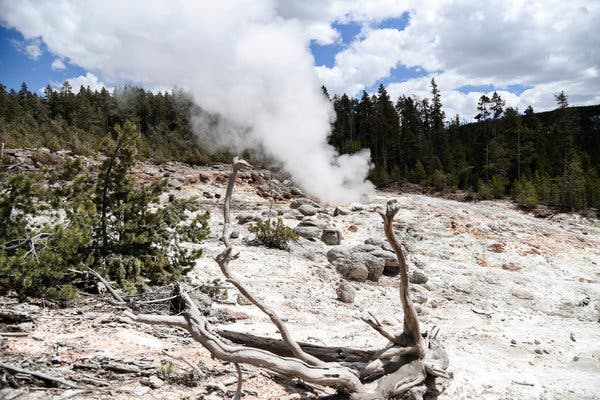 “It was so much louder, and higher and stronger than anything I had seen, almost frightening,” he said.

“People around us were so emotional, just cheering and roaring,” Mr. Carter said. “This old fellow who had it on his bucket list was so verklempt when the geyser erupted, it was neat.”

All but dormant for years, Steamboat is erupting fairly frequently these days and more people like Mr. Carter are getting to witness it.

While Old Faithful is a global icon of punctual eruption — it usually erupts every 90 minutes or so — it is the exception among geothermal features. Most of Yellowstone National Park’s 1,000 or so geysers are far more irregular and unpredictable.

Many geysers, like Steamboat, are quiet and then suddenly rouse. Steamboat sometimes jets water to heights of 300 to 400 feet — far higher than Old Faithful’s top height of 185 feet — for anywhere from a few minutes to about an hour.

After the jet of water in its eruption, Steamboat — in Norris Geyser Basin, the park’s hottest — goes into a ferocious, churning steam phase that can last for two days. On a recent visit early this month, Steamboat was shooting clouds of white steam in huge volumes, sounding like a jet engine or a giant foam steamer for a latte.

There were only very occasional eruptions until last March when Steamboat blasted off. It has been erupting every week or two since. It set an all time record with 32 eruptions in 2018, besting its total of 29 set in 1964. It has continued that pace of eruptions in 2019 and last erupted on Feb. 1.

Ear Spring Geyser in the park’s Upper Geyser Basin also recently woke. On Sept. 15, the bubbling, ear-shaped spring erupted, throwing up coins, a cinder block, a baby pacifier and other objects that had been tossed into it over the decades. It was only its fourth eruption in the last 60 years.

Giant Geyser in the park has also been unusually active. And new vents and fissures have formed in some of the park’s geothermal areas.

What has stirred these grand geysers out of their years of slumber? It’s hard to say precisely. “These geysers are incredibly dynamic,” said Michael Poland, a federal geophysicist who studies the massive caldera for the Yellowstone Volcano Observatory. “Over time their conduit systems expand and contract as minerals precipitate in them and close them up, and the pressure builds and reams them out again.”

Add to that large annual swings in the amount of snow and rain, which changes the level of the below ground reservoirs, and a constant jiggling of the landscape. “We have an average of 1,500 locatable earthquakes every year,” said Jeff Hungerford, a park geologist. “That acts as an agitator to the system and allows some of these geysers to keep open.”

One thing the changes don’t mean is that the magma-filled supervolcano under the park is going to blow. Caldera activity is constantly monitored, and there would be years if not decades of warning signs before a major eruption would occur.

The vast array of the park’s geysers and other geothermal features — some 10,000 mud pots, hot springs and fumaroles, the largest cluster in the world — are driven by Yellowstone’s location above the caldera. As water on the surface seeps below ground, it hits the magma and comes to a boil, which forces the superheated water and steam upward through a labyrinthine network of fissures, fractures and other plumbing.

The Geyser Observation and Study Association, colloquially known as the geyser gazers, is a group that spends hours watching simmering geysers and recording their every sputter, pop and blast and posting the information online.

And now that Steamboat is in a lively phase, it’s the talk of the park.