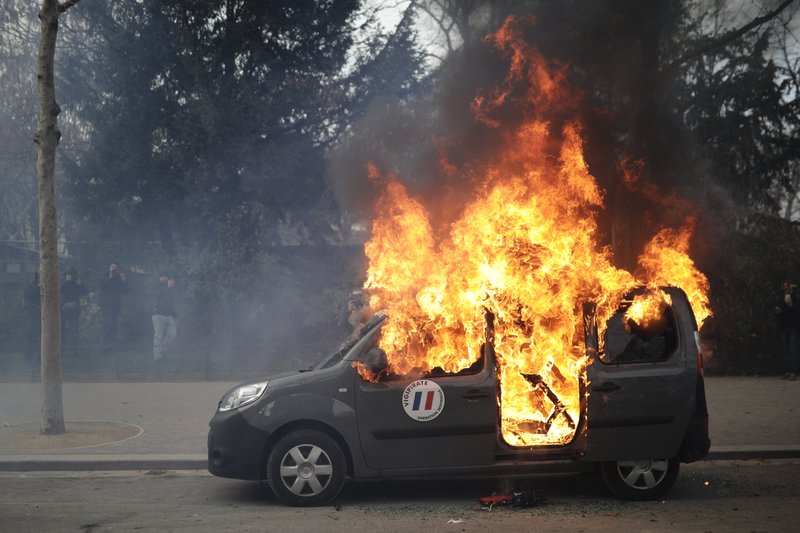 PARIS (AP) — A French yellow vest protester’s hand was ripped apart Saturday during violent clashes in Paris as demonstrators tried to storm the French National Assembly in a 13th consecutive week of unrest.

Police said the injured protester lost four fingers as police swooped in to stop protesters from breaching the parliament’s exterior. Police could not confirm French media reports that the hand of the demonstrator, who is now being treated in the hospital, was blown up by a grenade used to disperse unruly crowds.

Police used batons and fired tear gas in Paris to disperse demonstrators, some of whom threw debris at riot police. Cars, motorbikes and trash bins were set ablaze as the protest moved toward the city’s Invalides monument and onto the Eiffel Tower.

French Interior Minister Christophe Castaner went to Twitter to express his “disgust” as protesters set alight an anti-terror military car. Its yellow smoking plumes, against the backdrop of the Eiffel Tower, made for a powerful image of rejecting authority.

Such vehicles have been a common sight in Paris since deadly extremist attacks in 2015.

“Every day the military … protects our compatriots from the risk of terrorism. These attacks are intolerable,” Castaner said.

Police said 31 demonstrators had been arrested in the unrest. But France’s Interior Ministry said this week’s protest was significantly smaller than last week’s.

The yellow vest activists, who have brought hundreds of thousands onto the streets over the past three months, are now trying to achieve electoral success but the movement is politically divided and has no appointed leader.

French President Emmanuel Macron — the target of many demonstrators’ anger — seems to be clawing back support from the public as he tries to address the movement’s anger with a national political debate on economic injustice. Recent polls show Macron’s approval ratings are rising.

Earlier Saturday, activists in Latvia staged a picket in front of the French embassy in Riga, the capital of the small Baltic EU country, to support the yellow vest movement and urge Latvians to demand higher living standards.

The activists waved Latvia’s red-and-white flag, shouting slogans like “the French have woken up, while Latvians remain asleep.”