During a solar maximum, the Sun gives off more heat and is littered with sunspots. Less heat in a solar minimum is due to a decrease in magnetic waves.

However, before a solar minimum begins, the sun usually unleashes mega solar flares which are released into the deep cosmos.

This hole on the sun first opened in the summer of 2018, and has been barraging Earth with cosmic radiation ever since.

Cosmic weather forecasting website Space Weather said: “During solar minimum, long-lasting holes open in the sun’s atmosphere, releasing streams of solar wind into space. One of those holes is facing Earth now, and it’s a big one. 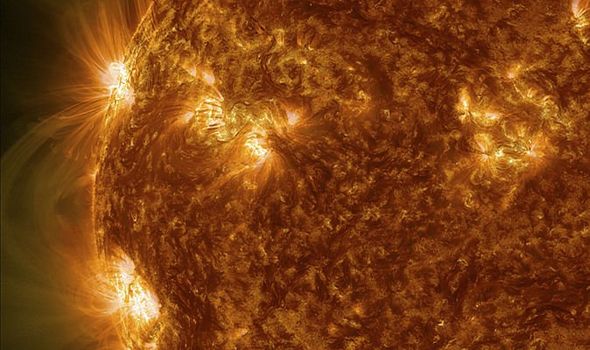 “We’ve seen this hole before. It opened in the summer of 2018 and has been spinning around as the sun rotates, lashing Earth with solar wind approximately once a month.

The storm has been classed as a G-1, meaning it will likely cause auroras in the northern or southern hemisphere – depending on where it hits.

While this solar storm will not be civilisation ending, the Met Office has warned we will face a monumental solar storm in the future, which could knock out Britain’s technology and cost the UK almost £16billion in damages. 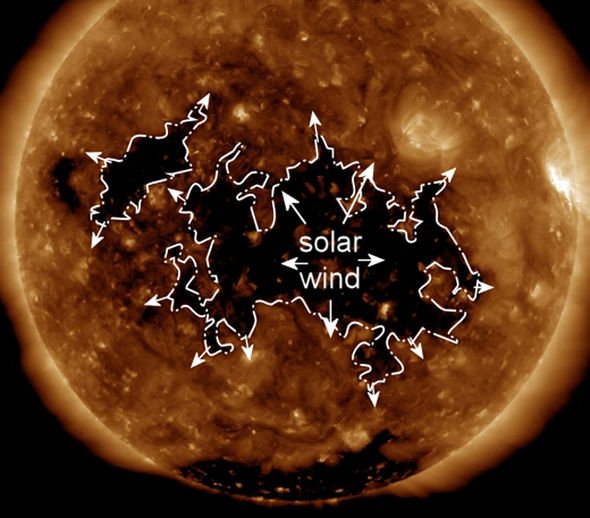 A massive hole has opened on the surface of the sun’s upper atmosphere (Image: SPACE WEATHER)

The country could be blunged into a blackout because it is not prepared enough for powerful solar storms, the Met Office told ministers.

The weather forecaster believes the UK does not have sufficient infrastructure to prepare for such an event.

A researcher from the Met Office said: “We find that for a one-in-100-year event, with no space weather forecasting capability, the gross domestic product loss to the United Kingdom could be as high as £15.9billion.

“With existing satellites nearing the end of their life, forecasting capability will decrease in coming years, so if no further investment takes place, critical infrastructure will become more vulnerable to space weather.”

Read More:What Is Causing This Geomagnetic Storm? There Are NO Sunspots Right Now