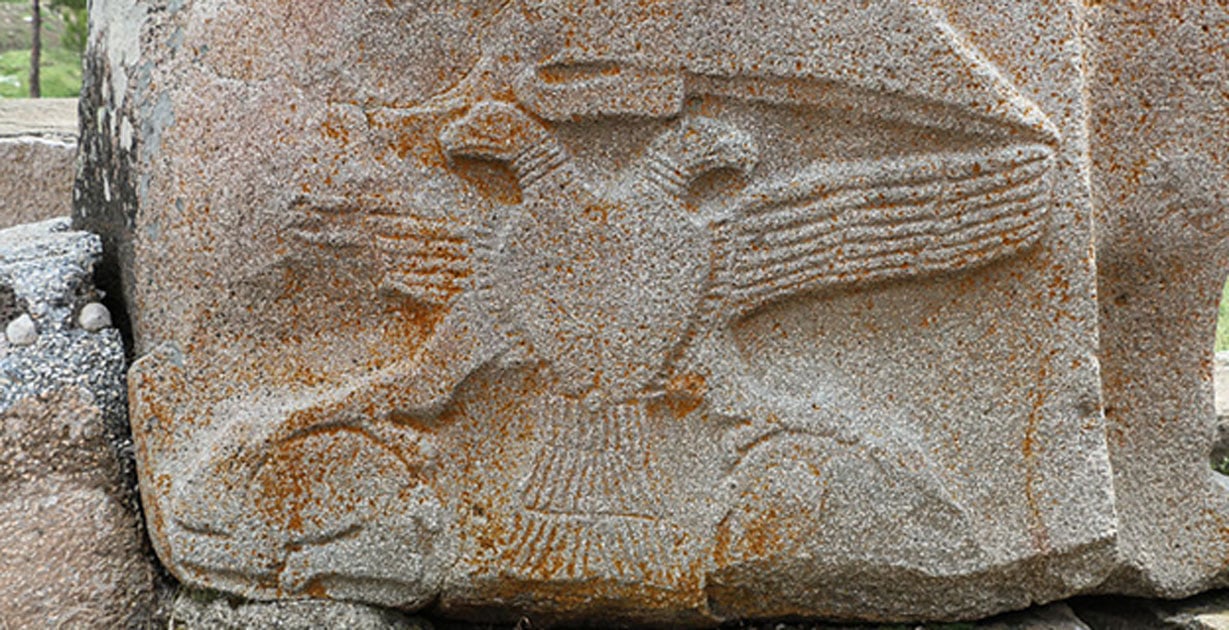 Several infamous empires of the early modern period and current modern periods bore curious insignia. The Byzantine, Austrian, and Russian Empires all adopted the symbol of a mythical creature, a double-headed eagle, to show off their imperial control of such vast lands. But the reality is that the double-headed eagle’s origins are far from modern: They trace to one of the most ancient of societies, that of Mesopotamia.

A means of signifying possession of items declared would be to own a customized cylinder seal, popularized in Mesopotamia in the latter half of the fourth millennium BC. Unique patterns and the owner’s name were often inscribed onto a personal seal, which would then be impressed onto a malleable surface, creating “the value of a signature” (Tessier xxii). When rolled-out onto a clay tablet that mentioned animals, land, slaves, or anything else, the distinctive seal impression would indicate the owner’s identity and what exactly they owned.

Previously, stamp seals (which contained a singular image) were popular, but cylindrical seals were able to be rolled all over a clay surface to seal it up—which “ensured the security of goods and authenticated documents” (Tessier ibid.). By rolling out the cylinder seal through multiple rotations, a repetition of the figures would be shown, the same scene engraved and over when rolled out, creating multiple identical scenes. 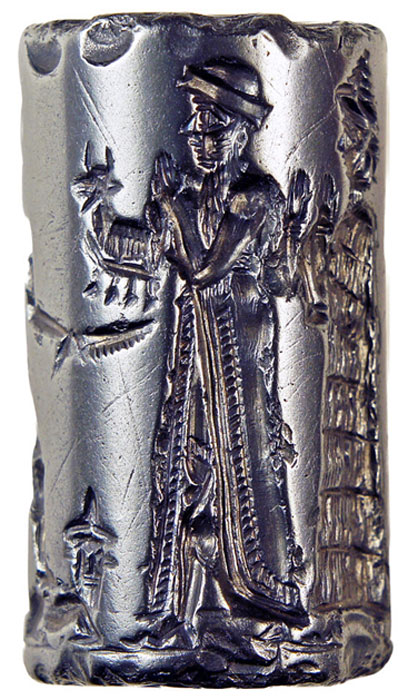 Different seals showed different things; some bore just the owner’s name and a patronymic, while others boasted names of a deity. Others contained scenes of mythical creatures, like the double-headed eagle, bull-humans battling lions, or sphinxes. The eagle, in its various incarnations, appeared to represent various Mesopotamian gods like Anzu and Etana. But it’s in the Hittite world, located in modern Turkey, that the double-headed eagle really took flight albeit separately from other double-headed mythical animals in Mesopotamian lore.

As the Assyrians moved westward in the second millennium BC, they brought their myths and symbols with them. Perhaps this is the origin of the Hittite adoption of the double-headed eagle, most notably depicted at the site of Yazilikaya a religious sanctuary near the capital of Hattusa. Some images previously prominent on cylinder seals eventually moved to a grandiose scale at Yazilikaya.
A ritual center made up of rock outcroppings engraved with sacred reliefs, Yazilikaya, dating from approximately the thirteenth century BC, looms large in the archaeological imagination of Hittite religion. It shows the Hittite royals—highlighted by King Hattusilis III and his wife, the prominent priestess and well-documented queen Puduhepa—worshiping the gods and being honored in turn. Later generations of the family seemingly continued work at Yazilikaya.

The gods depicted at Yazilikaya by the royal engravers are occasionally flanked by animals. Symbolically, these animals lend their strength and power to the gods. The pantheon demonstrates mastery over such fierce creatures by resting on them in a way that no mortal could manage. A goddess of the earth is supported by a lion, while the descendants of the weather god are supported by none other than our old friend the double-headed eagle. 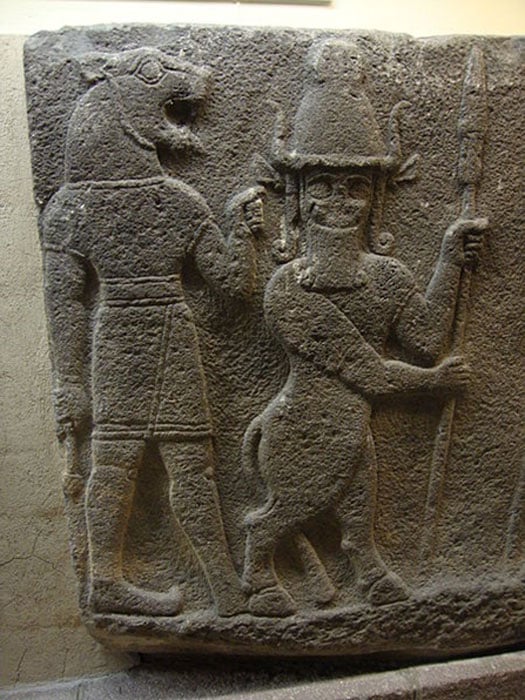 Perhaps the bird is the animal manifestation of these divinities, but it’s hard to know, since the Hittites didn’t explicitly tell us what these carvings meant. Even scholars debate the exact significance of the double-headed eagle’s presence, but the fact it’s tied in to weather goddesses at Yazilikaya might indicate an underlying Mesopotamian association of double-headed eagles and weather gods that traveled all the way to Turkey. Several hundred years after Yazilikaya was established, in the late Babylonian period, the storm god Udulu was occasionally depicted as an eagle. The suggestion that the ideologues behind Yazilikaya and late Babylonian imagery, separated by centuries and thousands of miles were connected is a tenuous link, however. 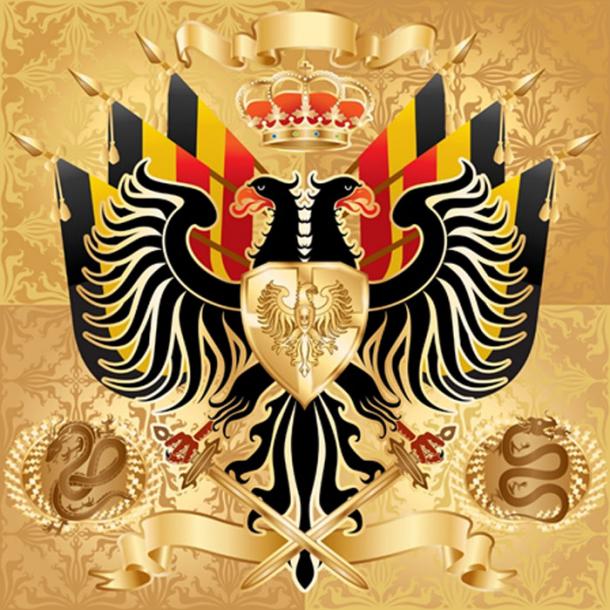 In other cases, the double-headed eagle is closely tied to royalty and tutelary functions. At the sanctuary of Alaca Höyük the double-headed eagle seems to support not two goddesses but the king and queen themselves. Some scholars posit that the Hittites regarded the eagle itself as divine, which makes sense, given the bird is shown literally supporting the gods and their chosen monarchs. A prayer for the Old Hittite king Hattusili I asks that the gods grant the monarch the vision of an eagle, while in the myth of Telipinu the deities dispatch an eagle to search for the storm god’s son, the titular Telipinu. 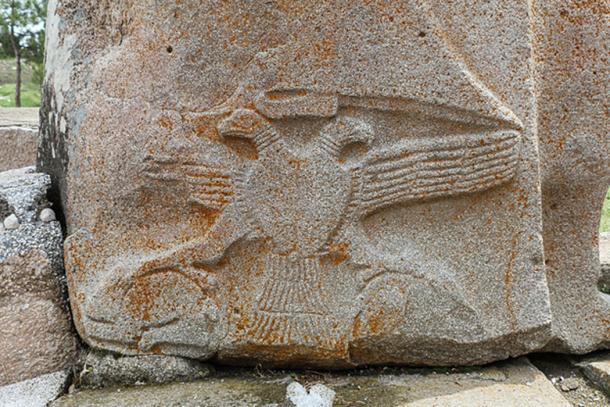 In other myths, the eagle serves as a divine intermediary and/or servant, implying a quasi-godly status for the animal itself. Other Hittite cylinder seals depict the dual-domed eagle, perhaps invoking protection for the seal’s owner. Possibly the big bird even symbolized the gods’ favor for the royal family and the king and queen’s divinely-derived power. Thus, it’s no coincidence that the double-headed eagle appears at the very entrance to Alaca Höyük, right?

Read More:Strange Signs In The Skies: What Is The Significance Of ‘The All Seeing Eye’ In Our Skies?