The Starving of Saqqara is the name given to an ancient Egyptian sculpture believed to date to the Pre-Dynastic period. Little is known about the origins and provenance of this statue, which is today held by Montreal’s Concordia University. Additionally, it is unclear as to the subject matter of the sculpture, and there has been debate about the artifact’s authenticity as well.

The Starving of Saqqara is a limestone sculpture measuring at 67 cm (26 inches), and weighing about 80 kg (176.37 lbs). The statue was carved from limestone, and depicts a pair of nude seated figures. One of the figures is a male and the other is often assumed to be a female holding a child. The figures are notable for their elongated heads , and thin, elongated limbs. Traces of pigments on the statue suggest that it was once painted. Furthermore, there are some ancient inscriptions carved onto the base of the statue, though its language hasn’t been identified yet. 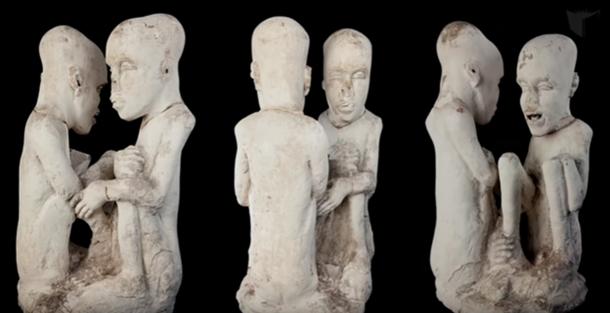 The modern history of the Starving of Saqqara began during the 20th century. The statue came into the possession of Vincent and Olga Diniacopoulos, who were avid collectors of ancient Egyptian, Greek, and Roman antiquities, prior to the 1950s. It is unclear how and where the Diniacopoulos family acquired the statue. Moreover, in spite of its name, the relationship between the statue and Saqqara, the vast burial ground outside the ancient Egyptian capital of Memphis, is unknown.

Vincent and Olga Diniacopoulos immigrated to Montreal from France, and the Starving of Saqqara was one of the artifacts they took with them on their journey. During the 1950s, the sculpture was displayed in the family-owned Galerie Ars Classica. After Vincent Diniacopoulos’ death in 1967, much of the collection was packed by the family and stored in the basement of their house. The Starving of Saqqara was part of this collection, and remained hidden for the next few decades.

In 1999, Olga Diniacopoulos requested Concordia University to assist with the management of the family’s antiquities collection. Part of the funds was to be used for student scholarships at the university, where Olga’s son, Denis, was a faculty member. The man responsible for this undertaking was Clarence Epstein, who, whilst studying the collection, brought the Starving of Saqqara back into the light. At that point of time, the statue was in fragments.

Making Sense of the Starving of Saqqara

After re-assembling the sculpture, the next step was to make sense of it. As the Diniacopoulos family themselves were uncertain about the statue’s origins and history, researchers from around the world were contacted. Experts from such institutes as the British Museum, the University of Cambridge, and the Israel Museum were contacted, in the hopes that the sculpture might be identified. Unfortunately, no one was able to say what it was with certainty. 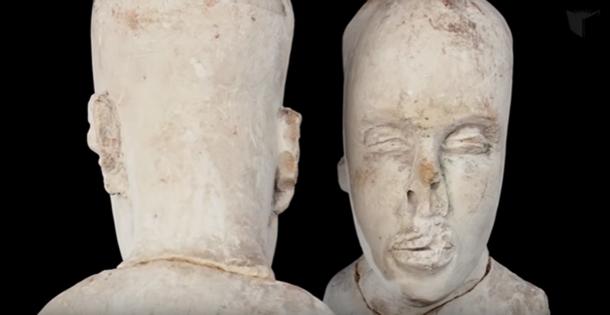 The authenticity of the Starving of Saqqara has been questioned due to the fact that the experts are unaware of anything else like it. Nevertheless, it is generally held that the sculpture is real. Experts at Concordia University, for instance, point out that the sculpture had been legally authorized for export. Considering that this was done during a period when the trade in antiquities was casual and poorly monitored, they argue that the sculpture is genuine. Another expert, the Swiss art historian Jean-Jacques Fiechter, wrote that the sculpture had to be genuine, otherwise Vincent Diniacopoulos, an experienced collector, would not have bought it, and then shipped it all the way to Montreal at a heavy cost.

Still, one may argue that even experts make mistakes. In any case, the sculpture remains a mystery, and further research has been considered by Concordia University.