The latest creation from Elon Musk’s SpaceX looks like it was ripped from the pages of a 1950s comic book. 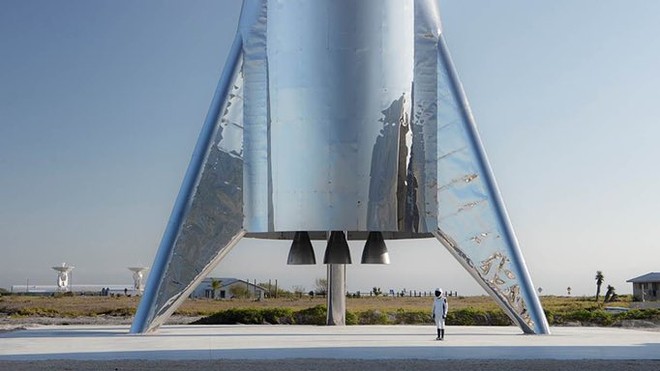 Musk on Thursday night tweeted an image of the completed Starship test-flight rocket from a SpaceX facility in south Texas. Silver and shimmery, with prominent curved tail fins, the spacecraft is reminiscent of something out of “Buck Rogers” or “Tintin.”

A video of the reusable rocket standing against a cloudy sky was tweeted by a rocket enthusiast, and retweeted by Musk:

That test rocket won’t be flying through space though — it will be used for suborbital test flights. “Orbital version is taller, has thicker skins (won’t wrinkle) & a smoothly curving nose section,” Musk said in another tweet.

The Starship rocket is intended to be a key component of Musk’s plan to land on — and one day colonize — Mars. The plan is for the 100-passenger Starship to be blasted into space by SpaceX’s upcoming “Super Heavy” rocket, which itself may take its first test flight later this year. The Starship will then land on Mars, and take off and return to Earth. Musk has said he hopes to launch a Mars mission by the early 2020s.

The engines are expected to be test-fired next month, and Musk has said he expects the first Starship test flights in March or April.

Read More:Why Are Billionaire Elites Preparing For A Cataclysmic Event? Do They Know Something We Do Not?

Read More:What Is Happening To Our Earth? Biological Annihilation

Read More:Mars One Colony To Be A Haven For The Super-Elite

Read More:Government Of Mars Already Underway: This Is An Idea Of What It Will Look Like