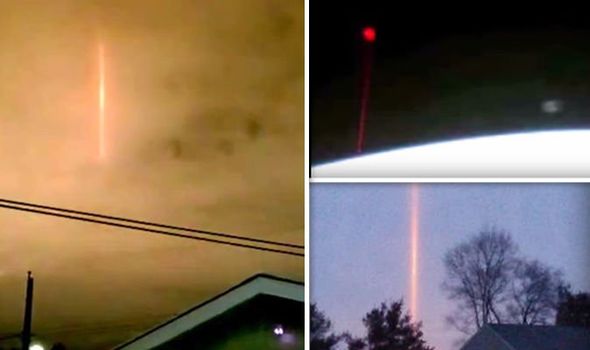 AN EERIE beam of light spotted by multiple witnesses above Canadian skies has prompted an alien panic – with many viewers pointing out the similarities to a strange light earlier spotted near a NASA space probe.

A mysterious, unexplained phenomenon has sent witnesses into a frenzy after a bizarre pillar of light appeared to hover above Canadian skies. The sighting, first recorded in December, has been described as “extremely enigmatic and unexplained”. Footage of the incident shows a strange red pulsing beam of light in the skies near Edmonton, Canada.

Viewers have pointed out that the beams are eerily similar to those seen in Michigan and also close to the International Space Station in 2017.

According to the viewers, the sighting could be proof an alien weapon in action.

In 2017, similar lights were spotted on the ISS’s live feed.

Zooming in on one image from the space station, a giant red beam of light can be seen moving away from the Earth’s atmosphere.

Read More:Column Of Light Spotted In The Sky In Argentina: What Causes This Phenomena?

Read More:Strange Beams Of Light Are Seen All Over The World